Home Equestrian Lifestyle Making the Most of Winter

This winter has been crazy, hasn’t it? You have to expect a certain amount of cold and snow at this time of year, sure, but it seems like it’s been relentless.

I’m usually a cold-weather complainer, but weirdly, I haven’t been as bothered by this year’s abnormally bitter weather as I usually am by normal winter weather. I got a great new winter coat for Christmas along with some snow cleats for my boots, and I feel kind of invincible with them. Plus, I like having an excuse to drink a lot of hot chocolate. But this winter has been rough for riding. 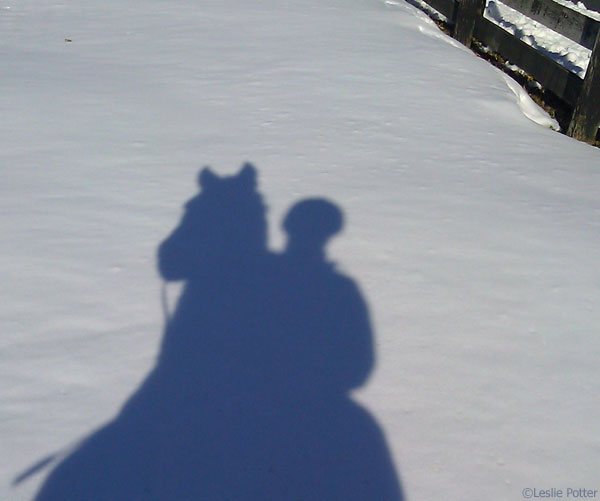 I’m lucky that I keep Snoopy at a boarding barn where his hay and water are taken care of. But his supplements, grooming and any blanketing changes are up to me. I have to admit, there have been weeks where all of my visits to the barn have been just long enough for me to bring the horse his bucket of supplements and stick my hand under his blanket to make sure he’s not too hot (ha!) or damp under there. And then I scurry back to my car and leave.

I just read a statistic that said that the snow depth record—that is, the amount of snow on the ground at a given time, not necessarily from a single snowfall—for Kentucky is 14 inches. Those of you in northern climes are laughing right now. I know. As a kid growing up in Maine, a 14-inch snowfall overnight wasn’t even a guaranteed snow day the following day. But that statistic gives you a little bit of context into how exciting/terrifying last weekend’s four-inch accumulation was around here.

The snow had stopped falling by Saturday afternoon, but the wind was gusting hard and it was still pretty unpleasant. Nevertheless, I trekked out to the barn for a little quality time with the horse, then took Brit for a walk around the farm. The trees at the edge of the property had directed the wind in such a way that there were drifts that were nearly two feet deep. 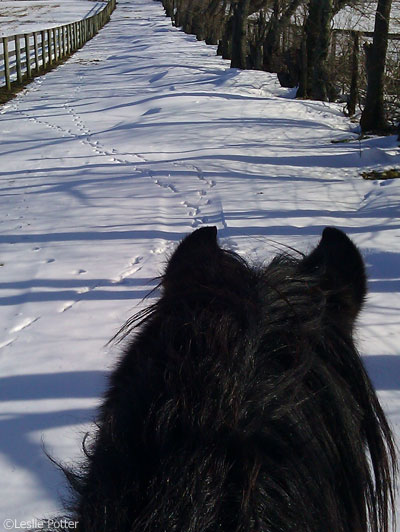 Notice Brit’s pawprints from the day before. Notice no other hoofprints. Everyone else had the good sense to stick to the arena, I guess!

The dog had fun bounding through the drifts, so when it warmed up a bit and the wind calmed down on Sunday, I thought maybe Snoopy would enjoy them, too. I threw on his bareback pad and took him for a walk around the farm. I steered him toward the drifts, which were roughly knee-deep for him. He stuck his nose in one and wiggled his upper lip. Then he started to paw. That’s when I realized that it probably seemed like a nice, soft place to roll, so I kicked on and we continued our walk through the snow. It wasn’t warm, exactly, but warmer than it had been. The sun was shining, the snow was still clean and white, and it was all almost enough to make me like winter.

I’m a little sorry to say that the snow is pretty much gone already. One day of above freezing temperatures took a lot of it, leaving only rutted, icy nastiness. Even though we’ll be back to negative temps again tomorrow, there’s no new snow in the forecast. My fellow central Kentuckians might throw snowballs at me for saying it, but I’m a little sad that we’re not getting more any time soon. 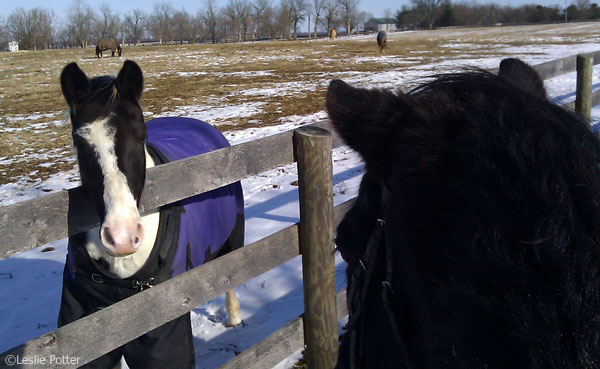 Visiting the mares’ field. Hello, ladies. It’s funny how the wind put 2-foot drifts in one spot but left this field pretty bare.

How’s your winter riding been going? Is frozen footing getting you down, or have you had some fluffy snow to ride in? Submit a comment below and tell me about it. And if you’ve got some great photos, go share them over on our Facebook page. We’ve had a lot of people showing us how winter looks at their farms, and it’s been fun to see everyone’s horses enjoying (or not enjoying) the snow.

Featured Video: From the Horse’s Perspective