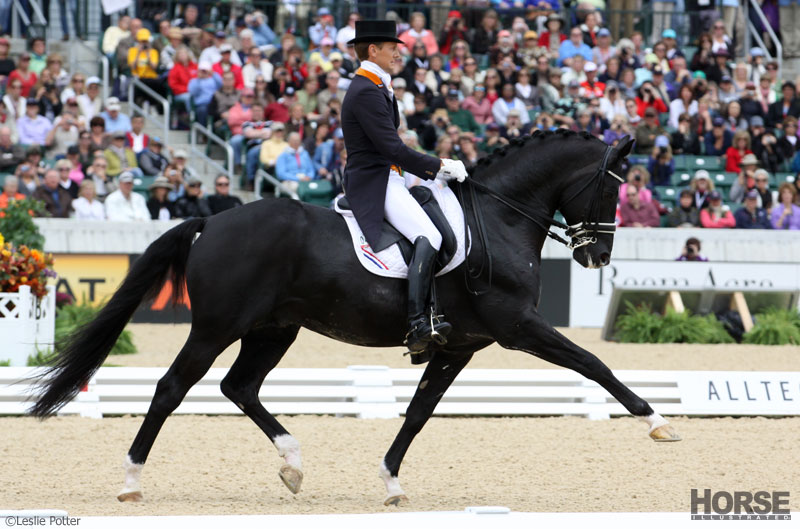 Dressage is a subjectively judged sport, which means that someone’s opinion is behind every winning score.
I almost never watch sports on TV. I’ve never been able to get into the professional sports that dominate American culture, or even the college basketball that is like a universal religion here in Lexington. But every two years, the Olympics take over primetime and I’m hooked. Skiing, swimming, speed skating or any of those other sports that get zero airtime when the Olympics aren’t happening? I can’t resist. I even stayed up past my bedtime to watch curling the other night.

So I was watching ice dancing yesterday. After an especially flawless skate, the commentator informed the viewing public that one pair had earned a new world record high score. That announcement was met with a derisive chuckle from my better half, who was pretending not to watch from the other room.

“How can you have a world record in a subjectively judged sport?” he questioned.

Well, the simple answer is pretty straightforward. It’s the highest score a panel of judges has ever given an ice dancing pair, therefore it is a record. But I get his point. No matter how complicated the judging system and no matter how many judges you have, there’s still a certain amount of opinion involved in scoring a sport like ice dancing.

A few years ago, Moorland’s Totilas took the dressage world by storm, setting world records in grand prix dressage with his Dutch rider, Edward Gal. Theoretically, there is some dressage ideal out there, and while we all acknowledge that it will never be anything more than theoretical, horses that come closest to approaching that ideal should earn the highest scores. So that means that when Gal and Totilas performed their tests, they were the closest anyone had ever seen to dressage perfection (at least until Charlotte Dujardin and Valegro toppled their records a few years later.)

But Totilas wasn’t and isn’t everyone’s ideal. While some looked at his flashy, high-stepping motion and saw a horse moving freely with natural brilliance that we should all aspire to, others saw a freakish “circus horse” gait that they attributed more to an extreme training regimen than natural ability or sound dressage practices. No one could argue that he wasn’t unique or exceptional, but the question of whether Totilas’ way of going was close to the dressage ideal is a matter of opinion.

(There’s more to a dressage score than the way the horse moves, of course, but I’m focusing on it here because it is the quality that distinguished Toto from his peers and earned much of the praise and criticism he received during his career.)

If you put Totilas in a time machine and put him up against the horses from 30 years ago, would the judges be amazed by the giant leap forward you’d taken toward the dressage ideal, or would they have been completely turned off? For comparison, here’s the gold medal ride from the 1984 Olympics. This is the legendary Reiner Klimke with Ahlerich.

Was the theoretical ideal of dressage different in 1984, or was it the same, but we hadn’t yet developed horses that came close to it? And if the ideal is different, how much does the distinction of a world record score mean? If the ideal 20 years from now is different, then who will care what Totilas or Valegro were doing in the dressage arena in the 2010s?

I’m picking on dressage because it’s the only subjectively judged equestrian sport in the Olympics, but all of these questions could be asked of other equestrian events. Are the western pleasure Quarter Horses of today better than those of the past? The five-gaited performance Saddlebreds? The hunters? The reiners? Or are they just being taken to some cartoonish extreme that almost parodies the supposed ideal?

That’s a question inherent in subjective sports. When you’re not being judged on faster, higher or stronger, you’re striving for something that can’t truly be measured, and that opens the door for taking things too far. Look at what happened with western pleasure. If a low headset is good, people thought, then having a horse drag his nose in the dirt must be better. Ultimately, that led to a backlash against the peanut-roller frame, but things had to get to a pretty low point before the pendulum started to swing back again.

Here’s where I’d wrap this up in a neat conclusion, if only I had one. I’m not sure if dressage horses (or ice dancers) are getting better or if judges are prone to inflating scores on some subconscious level. And maybe it doesn’t matter, although if the trend keeps up, eventually some dressage horse will get within spitting distance of a perfect score, and then what?

Personally, I would be happy if Valegro and Dujardin kept their records for a long time and a perfect score remained a far-off ideal. There should always be more to strive for. That’s what makes sports, Olympic or otherwise, worthwhile.