I like to think that I’m not a worrier when it comes to my horse. He lives a pretty simple life with 24-hour turnout in a field with a shelter and a couple of buddies. He doesn’t wear shoes, which means I don’t have to worry about him losing one in the mud. He’s semi-retired, which means if he seems a little off one day, I can give him all the downtime he needs without the pressure of getting him ready for a show. Snoopy’s golden years have been pretty relaxed for both of us.

So why do I keep stressing out over blankets?

Every fall as we’re putting together our winter content for Horse Illustrated and HorseChannel.com, the same standard blanketing advice makes its way in. If your horse is healthy, unclipped, fed plenty of forage and has access to shelter, he doesn’t really need a blanket. Snoopy is all of those things. Realistically, I know he never actually needs a blanket.

This winter was the pits, as most of you know. It was cold. It was exceptionally snowy by local standards, and it seems to be going on forever. But my first mistake was way back in early winter, during our introduction to the polar vortex. I just couldn’t imagine letting my 25-year-old pony stay outdoors au naturel, so he wore his midweight blankie and I felt good about myself.

But once he was wearing that blanket, it was hard to leave it off. I’ll admit I probably project my own feelings of coldness on Snoopy. Even when temperatures were back to a reasonable winter spot in the teens or 20s, I’d be shivering in my parka and just couldn’t bring myself to leave Snoopy without his.

There were occasional mid-winter thaws that convinced me to remove the blanket. But those always seemed to be followed by rain and then a return to arctic temperatures. That’s the worst. We’d have 50 degrees one day, then it would start raining in the afternoon and continue overnight as the temperatures plummeted and the rain turned to ice and then snow. There are several blanketing options here, and none of them are good.

The correct answer, of course, is No. 4, but that’s also the one option I never go with. And you know what? Every time that weather scenario popped up (which seems to happen way too often), I would find myself at home late in the evening, listening to freezing rain blowing against my window and I’d think, “I’m so glad I put Snoopy’s blanket on!”

Yes, I admit it’s more for my own comfort and peace of mind than his, but there it is. Blanketing my horse makes me feel good. And he never overheated or got sweaty under his blanket this winter, so I can stand by my blanketing decisions.

On the other hand, we had a surprise early-spring snowstorm earlier this week. Snoopy’s been blanketless for a while, and I just didn’t think to put it on the evening before the storm. When I went out to check on him after he’d spent a day in the blizzard-like snow and wind, was he frozen into a snowbank a la Jack Nicholson at the end of The Shining? No. He was content, alert, healthy, and very much alive. He was fine.

It’s almost April, and for the first time in a very long time, the extended forecast shows nothing below freezing. That means my self-induced blanketing stress might finally be over for another year. This also means it’s almost time to start worrying about fly masks and grazing muzzles, but until then, Snoopy will be free of clothing and accessories and we can both relax.

English Accents: Horse Things for the Home with an English Style 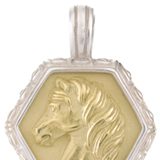