There’s an annual arts fair that takes place at a little park near my neighborhood each year on Mother’s Day weekend. It’s a very family-oriented event with kids’ activities like a petting zoo and pony rides taking place amongst the artists’ booths. As I wandered over to the fair last weekend, the pony ride was the first thing I noticed, and no, not because I contemplated getting in line to take my turn. 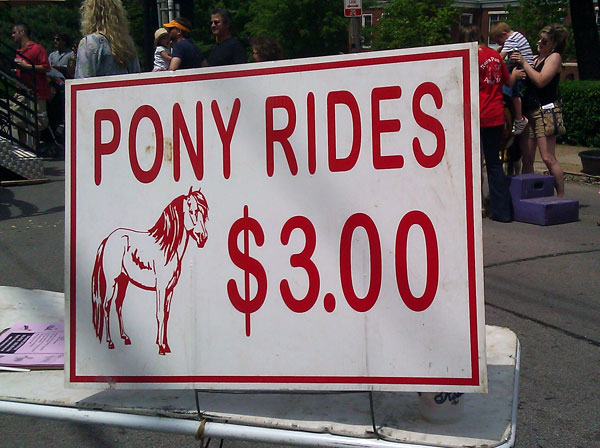 The grassy part of the park is pretty well occupied, so the pony rides take place on the street, which is closed to traffic. It’s not ideal, but maybe reducing the temptation of grass underfoot makes life easier for the pony wranglers. So as I approached the park, I saw a pony ride participant gripping on to the little western saddle’s horn as the pony plodded along on the pavement. The pony’s leader was plodding along, too, looking at the ground in front of him and not the kid behind him. But from where I stood, I could see the saddle slipping slowly off to the left. The kid sat quietly, leaning more and more to the right but evidently not complaining about her predicament out loud. I was still pretty far away, but it really didn’t look like it was going to end well.

I scanned the area for the kid’s parents, who I assumed must’ve been there, and sure enough I spotted Dad, standing on the sidelines taking photos. Once he got his shot, he stepped over and pulled his daughter back up so she was reasonably centered on the pony’s back. The action of a parent stepping in quickly was enough to finally get the guy with the lead rope to look up. Fortunately for him, this particular parent seemed to be the laid-back sort.

Maybe I’m a bit of a fuddy duddy when it comes to kids and horses. My past career teaching beginner riding lessons and my current career in which I’m regularly exposed to the best and worst of horsemanship probably increase my fuddy-duddiness. Watching a fairly innocuous pony ride set off all the alarms in my brain. Of course there are no helmets involved. The ponies seemed adequately deadheaded and safe, but attentive attendants still seem like a must-have when you’re putting tiny tots on the backs of equines in a busy environment. And, I don’t know, couldn’t they find some spot of dirt so these ponies aren’t on pavement?

On the other hand, where would be all be without the humble pony ride? Somewhere in my parents’ collection of photo albums, there’s a photo of a 5- or 6-year-old me, sitting on the back of a pony at a petting zoo, gripping the saddle horn, wearing shorts and sneakers and no helmet, being led by a bored-looking teenager. That was probably my first experience on the back of a horse, and while I don’t actually remember it, I was probably thrilled. A couple of years later I did get real riding lessons where I wore long pants and boots and even a helmet (although this was in the pre-ASTM/SEI days, I’m sure it was better than nothing.) I learned how to steer and stop on my own and eventually trot and post. But not every kid gets that. For a lot of kids, the pony ride is the beginning and end of their equestrian career.

In a perfect world, every kid who wanted to ride a pony would get a chance to really and truly ride a pony. But in this imperfect world, I guess a pony ride at the art fair is better than not riding at all.

The Lighter Side of Castration