I just returned from a fantastic week of vacation. I have a pretty sweet gig here at Horse Illustrated, but I have to say, it was really nice to not look at a computer for a week and just enjoy some summer downtime in my home state of Maine.

I spent a couple of days camping and hiking in Acadia National Park, which was lovely even though it rained most of the time. And when it wasn’t actively raining, the fog blocked out the park’s signature ocean views. But it also kept things nice and cool during our afternoon hikes, so no complaints. 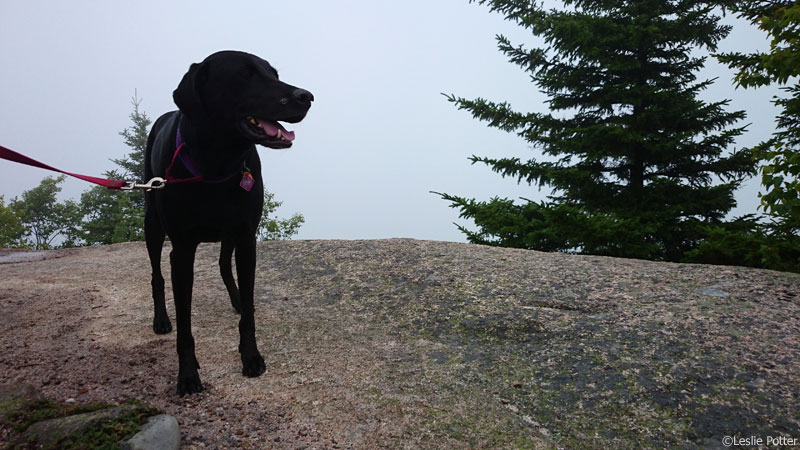 My dog, Brit, posing in front of what is probably an amazing scenic vista.

My family took a few trips to Acadia during my teenage years, and we’d bring our bikes and ride them around the park’s network of carriage roads. As the name suggests, these roads were designed for horse-drawn carriages and are still popular with trail riders today.

Among the regular equestrian visitors to the park is Martha Stewart, who apparently owns a vast summer estate in nearby Seal Harbor. As a result, I have a second-degree story of a brush with celebrity via an acquaintance of mine. This acquaintance owns a pretty little Friesian mare whom she has described as “follicly impaired.” She’s a purebred Friesian, but she came into the world a bit small and with fairly sparse feathers. Martha, as you may know, also owns Friesians, but hers are magnificent, hairy beasts that look ready to carry a fully-armored knight into battle, as you might expect.

My friend took a trip to Acadia with her lovely-but-runty mare, and while enjoying the carriage trails, who should come around the corner but Martha Stewart astride one of her war horses. If the little mare looked little on her own, you can imagine how she looked next to one of Martha’s Friesians.

Here’s the part of the story where I could lie and say that Martha laughed derisively at the horse and said, “You call that a Friesian?” But apparently she smiled politely and said hello and rode away.

Without any exciting celebrity misbehavior, this story doesn’t make for a very exciting blog post, so I’m going to end it here with Martha’s own video of a horse-powered trip along Acadia’s carriage roads. Enjoy the ride!

This video takes a minute to load. If you can’t stand the suspense, click here to watch it on Martha’s site.

How to Bond with your New Horse – Tools for Trust