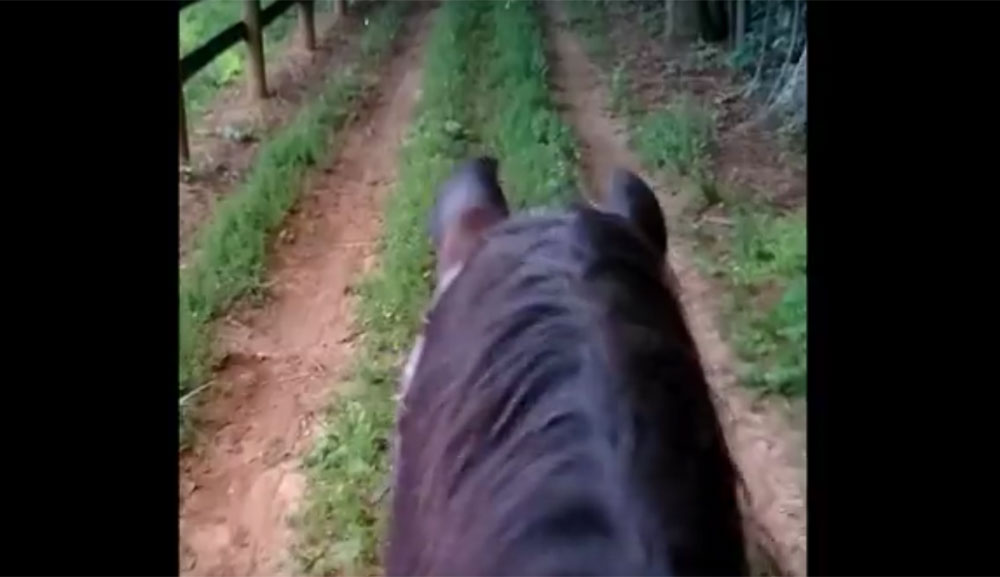 I know I said it in my last post here on The Near Side, but I can’t believe it’s August already. I don’t know why the end of summer makes me wistful, but it does. I mean, I seem to be getting less heat-tolerant as I age, so I’m sort of looking forward to autumn weather. And I do have to go to work year ’round, so I shouldn’t have the back-to-school blues of childhood.

One thing that I definitely do miss when summer fades out is the long hours of evening daylight. Here in Lexington, the sunset stretches until after 9 p.m. around the solstice, which means there’s residual light until almost 10:00. Granted, we have a later sunrise than people on the other end of the time zone, but that works out just fine for non-morning-people like me.

I like taking advantage of that extended daylight by going for evening rides around the farm in the summer. That’s when the farm is relatively quiet and the air is cooler and more comfortable. About a month ago, I was enjoying a late evening ride around the farm, following a path that traces the perimeter of the property. At the back of the farm, there’s a little incline that’s kind of rutted and has lots of roots, so I usually just hold my reins at the buckle and let Snoopy pick his own route up the uneven path. On this particular evening, the fireflies were out in full force, giving the path a magical feeling.

I’ve often said that if I had a helmet cam, my videos would be super boring, but I wanted to capture the firefly light display, so I tried to record the scene using my camera phone. Predictably, it didn’t work; I think my phone’s idiot-proof camera lightened the dark evening too far and washed out most of the fireflies. But you can see a few sparkles here and there. And you get to see Snoopy’s adorable ears as he navigates his way up the trail. I’m going to keep this one around for some cold January day when it’s dark at 4:00 and the roads are covered in ice. Then I’ll remember why I look forward to summer.