Home Equestrian Lifestyle The Near Side: Equestrian Reading List – In Service to the Horse 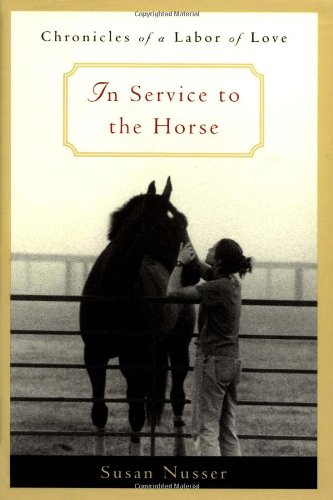 About a million years ago, I solicited suggestions for horse-related books from you, the HorseChannel.com reading public. I remembered doing that just recently when I found myself on the hunt for something to read in my spare time, and I dug through The Near Side archives to find that post. There was a recommendation in the comments for a non-fiction book called In Service to the Horse (hat tip to Howard from Kentucky!)

In researching this book, author Susan Nusser followed Samantha Burton, head groom for eventer David O’Connor. The book covers a span of time from November 2001 through late summer of 2002, and that provides a diverse picture of Sam and her fellow grooms’ lives. At the beginning, it’s the off-season and the grooms’ jobs are fairly routine, from barn chores to flatting the horses and planning for the winter season ahead in Florida.

To me, those early scenes of mucking stalls and hacking out on a rainy fall day seem entirely appealing, although I don’t think that Nusser intended to portray them that way. Soon, the rhythm changes as competitions begin. The grooms work 7-day weeks with some days beginning at 3:00 a.m. and ending late at night. They don’t get breaks. They sleep in aging campers with no hot water. They never complain, because they love their horses and can’t imagine doing anything else.

At one event, Sam’s loyalty to her employer and the love she has for her horses are at odds. Weather has made the cross-country course treacherous, and she wants David to withdraw instead of putting the horses at risk. As a professional rider working on making the World Equestrian Games team, David is hesitant to give up an important competition. It’s a scene that illustrates how the grooms’ priorities have so little to do with the honor of working with the country’s best event riders and everything to do with the animals in their care.

Nusser also includes some slices of life from grooms in other situations, including the stallion barn at legendary Thoroughbred farm Lane’s End. While the O’Connors’ barn is run by women in their 20s who are there for the love of horses, the grooms at Lane’s End are men, mostly older, and there because a job’s a job. The central character here is Kenneth Burns, a man who came to Lane’s End with no particular interest in or experience with horses. But his knowledge and even affection for the horses has grown during his 20 years there. In a way, his devotion to his charges is no less than Sam’s to hers.

The hunter/jumper circuit provides another backdrop for the lives of grooms. Nusser looks in on Market Street, the barn of Olympian Anne Kursinski. Even at a stable of that caliber, turnover on the grooming staff is treated as a given; the head groom at the beginning of the book is given credit for being the rare soul to give notice before moving on to a new gig instead of just disappearing. Grooms in the show jumping world are often aspiring professional riders, but their workload means that, for the most part, they are grooming for other people and rarely have time to ride at all, much less take on a competitive horse of their own.

In Service to the Horse was published shortly after I graduated from college, Equestrian Science degree on display in my parents’ house where I lived while teaching lessons part time and looking for a “real” job in the industry. I wish I’d read this book back then. I’m not sure it would have changed any choices I made, career-wise, but it would have been insightful. I knew that the horse industry is a tough industry to work in and being a groom is among the toughest jobs in it. I’d worked as a groom (albeit at a much lower level and in a different sport) and had plenty of college friends who shared stories as they traveled that career path. But this earnest, unglamorized look at the people who work in this role would have certainly given me some food for thought.

It’s interesting to read this book now and see how the industry has changed so much in just a decade. The events take place when long format was still the norm for eventing. This was also before the recent upgrades to cross-country safety, such as frangible pins and logs that break on impact. At one point, the author references “the bad old days” of eventing, referring to pre-1992 cross-country dangers. Today we look back on the mid- to late-‘00s as a low point with numerous equine fatalities. On the show jumping side, Wellington, Florida is described as an insular environment of elite horses and their wealthy humans, detached from the surrounding town. As I understand it, that’s no longer the case.

But even though some references are dated, the role grooms play hasn’t changed and this look into their lives is as fascinating as ever. For that reason, I whole-heartedly recommend this book to anyone who aspires to work in the horse industry, or to anyone with an interest in equestrian sports. If you’ve read it or plan to read it, let me know what you think.

Alright, HorseChannel. What horse book should I read next? This time, I promise I won’t take a million years to get around to reading it.