Home Lifestyle The Near Side: Why Don’t Millennials Like Clydesdales?

UPDATE (Nov. 24, 9:00 p.m.): Anheuser-Busch released a statement clarifying that the Clydesdales will, indeed, be featured in Budweiser’s advertising during the 2015 Super Bowl, and you can watch one of their holiday spots right now.

The story this morning may have left a wrong impression – the Budweiser Clydesdales will, in fact, be featured in next year’s Super Bowl advertising and are also a part of upcoming holiday responsible drinking advertising.

The Clydesdales play a strong role for the brand, representing Budweiser quality and care for more than 80 years. As icons of the brand—and relevant symbols of integrity, perfection and team spirit for all generations—they are important to the brand and our campaigns.

The Wall Street Journal recently reported that Budweiser is trying to expand its fanbase by appealing to a younger, hipper crowd.

According to the WSJ, 44% of [legal] millennial drinkers, at least those aged 21-27, have never tried Budweiser. These hip kids prefer craft beer, it turns out, or light beer, or weird things like Lime-a-Rita, whatever that is. So how will Budweiser keep a grasp on its dwindling market share? By specifically targeting the very demographic that has rejected them. And as everyone knows, millennials hate Clydesdales.

I’m several years removed from 27, but I am technically a millennial, I guess, depending on whose definition you use, and it will not surprise you that I love the Clydesdales. I really don’t like the trite, sexist ads that beer companies were once notorious for; i really hope Budweiser isn’t planning to go back to that. I certainly don’t speak for the entire generation that I am barely a part of, but based on the number of Buzzfeed listicles centered around cartoons from the 80s and defunct soda brands of the 90s, I think it’s fair to say that the demographic Budweiser is targeting sure likes to indulge in nostalgia. It seems misguided to kick out a much-beloved, longstanding brand symbol when attempting to reach these people.

According to the WSJ:

“[Budweiser’s parent company] AB InBev plans to concentrate future Budweiser promotions exclusively on [the 21-27] age bracket. That means it will not trot out the traditional Budweiser Clydesdales for this year’s holiday advertising. It means February’s Super Bowl ads will feature something more current than last year’s Fleetwood Mac.”

The Clydesdales’ future with the company has been in question before. After InBev merged with Anheuser-Busch, the new parent company appeared to take a much more serious, bottom-line oriented stance than the traditional culture A-B was known for. InBev’s strict austerity meant cost-cutting, and let’s face it, family-friendly images like horses aren’t exactly a precise, targeted marketing tool for a product meant to be sold to adults.

But they are unquestionably beloved. When the Clydesdales appear in an ad, they are guaranteed the top spot on the Super Bowl Ad Meter polls. But does that translate to sales? Eh, I dunno. I love the Clydesdales and I do drink beer, but frankly, I don’t think I’ve been within a 20-foot radius of a Budweiser since the last time I was in St. Louis. I’m one of those snobby millennial craft beer snobs, I guess, even though the local microbreweries don’t use horses for marketing. (That’s not entirely true. Shout out to Lexington’s Blue Stallion Brewing. Try the hefeweizen.)

I doubt a company as big as A-B InBev makes any marketing decisions without doing some serious research, but I still think they’re making a mistake. Time will tell, though.

In the meantime, here are a bunch of classic Super Bowl ads and Clydesdale appearances that, for now, we can still enjoy. 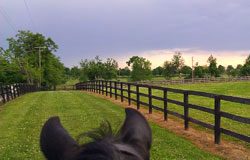