Home Lifestyle The Near Side: First Ride of 2015 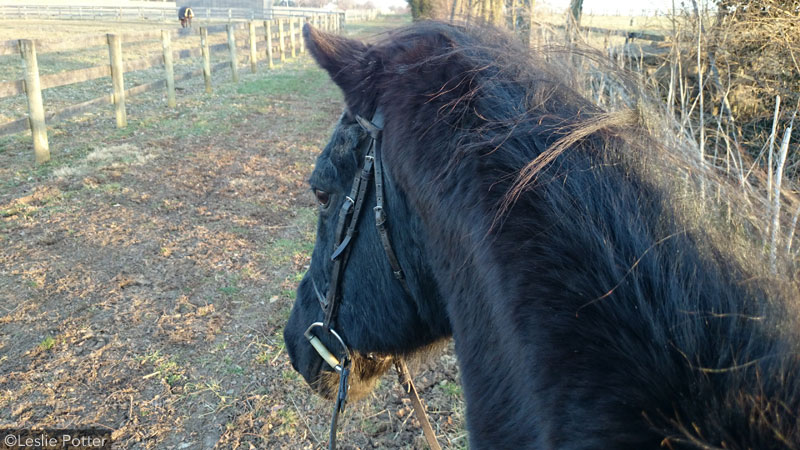 It was a cold and windy New Year’s Day, but fuzzy Snoopy is well-dressed for the season.

If I look back at my 2014 as a series of notable events, it appears to have been a pretty crappy year. Just on the equestrian side of my life, things kind of nosedived (nosedove? No.) At Snoopy’s routine spring appointment, my vet told me that his previously barely-there heart murmur had escalated, and I should be cautious with him. I later had a specialist out to ultrasound his heart and she confirmed that, while his condition probably wouldn’t be lethal, I should keep my riding limited to mostly walking with no forced exercise. I’d already changed my riding routine to primarily light hacking anyway, so it wasn’t a major difference. But I enjoy the occasional brisk canter through the field, and I think Snoopy did, too (sometimes.) It’s hard to accept that it’s likely something we’ll never do again.

Shortly after that news, my saddle was stolen (more accurately, was collateral damage when my car was taken for a joyride by some local youths, but that’s a whole other story.) It’s not been recovered and never will be—I suspect it ended up in a Dumpster. I almost wish it had been pawned or something because it was a perfectly good saddle. Someone should be using it. And as a synthetic, it will never decompose so it really is just taking up space in a landfill somewhere. I can’t think about it.

A few months ago, Snoopy had his first colic episode in the entire 13 years that I’ve known him. He recovered fully and quickly with fairly minor veterinary intervention, but it’s still tough to see my formerly bulletproof horse go through that.

This all wrapped up with a tidy bow just before Christmas, when my vet came out to float Snoopy’s teeth and observed that he was starting to look a little worn down.

“You never used to be able to tell how old he was,” my vet said of Snoopy. “But now he looks his age.”

This is all just a year after I cheerfully wrote this article about how old horses can—and should—keep on truckin’. How things change.

And while this list of bummers from my horse life is pretty depressing now that I’ve written it all out like this (why did I think that was a good idea?), I don’t feel unhappy or even discontent. The rest of my life is pretty good, and in spite of the major downgrade in his Immortal Equine status, Snoopy is still pretty healthy. He and I are both happy with his current boarding-stable home. I don’t have a saddle, but I do have a bareback pad, which is kind of perfect when all you do is walk around the farm anyway.

Attitude is everything, as they say, so I’m shaking off 2014 and heading into this year thinking positively. I started 2015 by going to a morning yoga class (because apparently I’m a person who does that now), taking my dog to the park in the afternoon sunshine, and then heading to the barn.

It was cold, and it was getting close to Snoopy’s dinnertime, but we went for a walk around the farm anyway. No pressure. No forced exercise. Just a walk. We visited the neighbors and even saw a fox hunting mice in the mares’ field. I tried to capture the lovely animal on video; it didn’t go very well and I think I’ve officially created The Most Boring Animal Video on the Internet. The bit at the end where it looks like an earthquake is where Snoopy got bored of my filmmaking and walked off.

It might be a fox, but it might also be a small Sasquatch on all fours. #OscarWorthy

I don’t know how much I’ll ride Snoopy this year. I’d always assumed he’d be one of those that works into his 30s, but I’ve become more at ease of the idea of a full retirement for him now. And frankly, I think he’d be fine with it if I came out every day just to brush and feed him and never rode him again. We’ll see how things play out, but I am glad I started 2015 with a quiet ride to set the tone for the year.

Have you had your first ride of 2015 yet? Tell me about it in the comments.