As I mentioned in
last week’s news roundup, Budweiser’s Super Bowl ad appears to be
featuring not only the Clydesdales, but their puppy friend from last
year’s adorable, top ranked commercial.

Oh, let’s just watch it again, shall we?

2013 brought us
Brotherhood, in which a horse breeder (officially The Rancher) and his talented Clydesdale are
separated, then reunited in a moment that always seems to air right when someone nearby is cutting onions or something, because my eyes just start watering like crazy. Every time. So crazy.

2014 brought us Puppy Love, in which a
horse in the same rancher’s barn befriends a puppy from the
neighboring, uh…dog breeder? The sign says “Puppy Adoption,”
but what does that even mean? Anyhow, the end is open to
interpretation, but suffice it to say, thanks to the power of horse/dog friendship, the puppy stayed at
the farm instead of being sold adopted to the guy with the sunglasses
who doesn’t look like he’d be a good puppy owner anyway.

Now, in 2015, the rancher, the horses, and the puppy (shouldn’t he be a dog by now?)
are back, but that rascally puppy has gotten lost. You can help
find him through Budweiser’s new social media campaign. I’ll let the rancher explain:

Help our rancher find his puppy, and you could win tickets to the Super Bowl. Watch to learn how. #BestBuds #sweeps
https://t.co/m9mW6WbYIN

I do not want Super
Bowl tickets. Can I just have the puppy?

We’re still
awaiting the release of the official ad, which will likely appear on
YouTube (and here on HorseChannel, of course) a few days before that
big ol’ football game. Stay tuned. 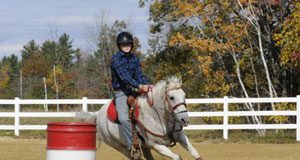