Home Equestrian Lifestyle The Near Side: The Fall Off Club 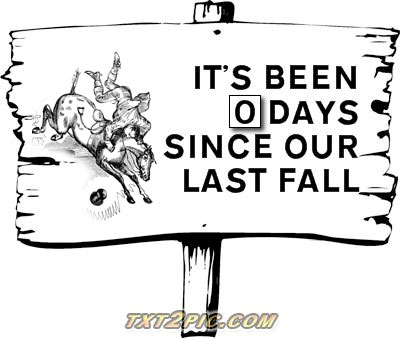 I once knew a riding instructor who kept a big poster board hung up on the tack room door. At the top it said “Fall Off Club” in bold letters and beneath were the signatures of everyone who’d met the footing that year. I think the idea was to show that falling off is something that happens to everyone sooner or later, that it’s not a big deal and if anything, is something to be proud of. You’ve earned your stripes. You’ve joined the club.

I didn’t waste much time between beginning my equestrian career and falling off for the first time, although my first couple of falls were the mild type where you land on your feet—unplanned dismounts, really. And I’ve had my share of real falls since then, but I’d say my membership in the Fall Off Club had lapsed, as much as it ever can. The last fall I can remember was probably 10 years ago. At least that was the case until this week.

On Sunday, I had a riding lesson to make up for one that was cancelled due to weather earlier in the week. I rode Charlie, my usual mount, and all went well until the end. We were headed toward a completely innocent, uncomplicated jump, and Charlie took a long spot. The next thing I knew, the ground was coming toward me and there was nothing I could do about it. I landed with a grunt and took a moment to assess my situation. I hadn’t been stepped on. Nothing felt numb or broken. I sat up just as my instructor told me not to move. I was okay, but I could feel where my shoulder had taken the brunt of the impact, and my nose started bleeding. I still haven’t figured that one out. I didn’t land on my face. I must have hit Charlie’s neck on the way down.

Let me tell you, if you want the maximum scare factor with minimal damage, I recommend a bloody nose. I was uninjured, but there was still a lot of blood involved. Judging by the looks on the faces of the other riders in the lesson, I probably looked how I felt, which was like I’d just lost a bar brawl.

Ultimately, I did get back on and trotted around the ring a few times before cooling Charlie out and heading home. As the adrenaline wore off, I started to feel bad. Physically, sure, but also mentally. I tried to replay the jump in my mind to figure out what I’d done wrong, but I just couldn’t.

Charlie occasionally goes for the long one, and when he does I might get left behind. But somehow I’d ended up way ahead of him. Had I pitched forward early, accidentally asking him for that takeoff? Had his big jump just thrown me out of the tack? I couldn’t piece it together, and that bothered me. Without being able to figure out what I could learn from this experience, I was left thinking less productive thoughts, like how I shouldn’t ride horses taller than 14.2 and maybe I should just switch to reining.

The following day, I took my dog for a run thinking it might help me shake off some of the soreness. And it went great…until around the four-mile mark when I tripped on the uneven sidewalk and faceplanted. I walked the last few blocks home, holding a handful of snow to my once-again bleeding face, looking like an even less successful bar brawler.

After that, I decided if I couldn’t even stay upright on my own two feet, maybe any equestrian sport was out. Maybe, I thought, swimming is the sport for me. Swimming in a shallow pool with very soft walls.

I felt marginally better after staying on my feet for a run the following day, but there was still a feeling of dread in the pit of my stomach. Because Sunday’s lesson was a make-up, I had another one scheduled for Wednesday. This was a good thing because it meant I didn’t have two weeks to dwell on the fall, but sort of not a great thing because I still felt like I’d been hit by a bus, and like gravity really had it out for me. I spent most of Wednesday worrying. I told myself that if I survived my lesson, I’d come home, get in bed, and stay there until the next morning so as not to tempt fate.

“Okay, Charlie. Here’s the deal,” I said as I groomed him before our ride. “I will do my absolute best to stay off of your mouth and soft on your back if you can do your best to be gentle with me today.”

He yawned. I decided to take that as an affirmative response.

As it turns out, the lesson was uneventful. I focused on trusting Charlie and staying quiet, and I like to think he held up his end of the bargain, too. My instructor wisely spent extra time having us work over some non-threatening crossrails before tackling anything more serious.

I would not have won any medals in that ride, but I finished the lesson feeling pretty good. I didn’t want to go home and hide in bed. I wanted to tell everyone how great I felt. But instead, I put Charlie away and shared an apple with him to thank him for being kind to me. I think he got it.

Riding and not falling off for a long time kind of feels like shaking a soda can. The longer you go without a fall, the more it feels like the pressure is building. You start to wonder if you’re due for it, as illogical as that is. So in a weird way, it’s sort of a relief to have renewed my Fall Off Club membership, although I hope not to do it again anytime soon.

Share your Fall Off Club induction stories below. Meanwhile, I’ll be working on my tuck-and-roll.

Video: Taking a Green Horse on the Trail with Jonathan Field