Home Equestrian Lifestyle The Near Side: Rider Fitness Revisited 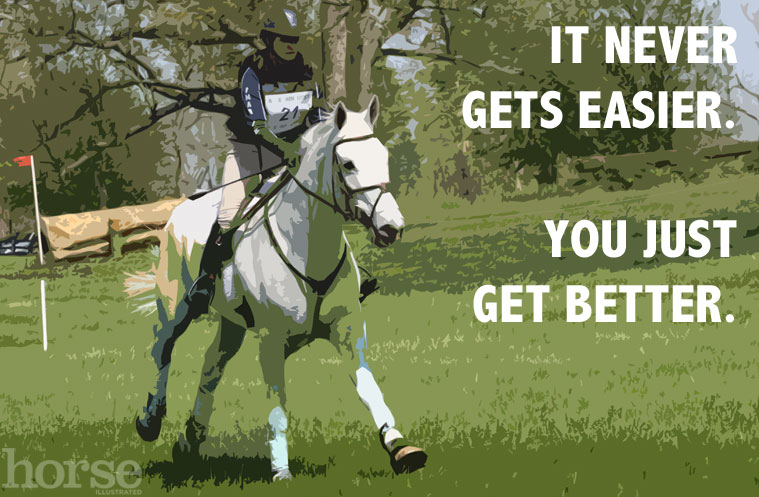 I’ve been thinking a lot about the topic of equestrian fitness lately as I’ve
been trying to improve my fitness out of the saddle. Plus, last weekend
was the Rolex Kentucky Three-Day Event, where the top riders in one of
the most physically demanding disciplines offer a reminder of just how tough riding can be. It’s both inspiring and intimidating.

The last time I brought up the topic of equestrian fitness, I tried to make the point that although riding IS a sport, it takes more than just riding and barn chores to stay fit. I don’t think I did a great job of making that point, based on the comments on Facebook. My mistake was probably embedding a chart that showed a calorie count for various horse-related activities, which overshadowed whatever I wrote about it.

A few months ago, I got one of those fancy fitness bands that tracks your entire physical existence, from heart rate to steps taken to how many hours you sleep. It probably reads your mind and stores your darkest secrets somewhere. It uses all this info and calculates how many calories you burn throughout the day.

You can record a specific time period as a workout and find out what your average heart rate and calories burned were for that workout. Naturally, I decided to use this feature to find out how my calorie burn compared to the aforementioned calories-burned chart. I was surprised that my numbers were as close to that chart’s numbers as they are (with the exception of grooming, which was much lower for me.) I’ve included some non-equestrian activities for comparison’s sake.

This is the real before and after from a day where I recorded grooming as a workout. If this took me 15 minutes, that’s about 75 calories burned. Snoopy, however, lost 50 lbs in that time from mud and hair alone.

Okay, so with all that being said, I don’t think there are any huge surprises here. If we’re just touting the benefits of riding as exercise, this does show that riding (as long as you’re doing more than sitting on a walking horse) is significantly better than walking on foot for getting the blood pumping and burning the calories. It’s not as effective as running, but it is more fun.

Maybe that last point is why this whole discussion is sort of frivolous. Sure, running through the desert while carrying a backpack filled with rocks would probably be great exercise. But how likely are you to do it? Maybe riding’s best asset is that it’s fun. It’s compelling. You’re not going to feel tempted to skip a workout if that workout is riding. You’re not going to give it up a month after New Year’s.

But we should still cross train, equestrians. It’s just the smart thing to do.