I’m taking an involuntary hiatus from showing during this phase of my life, primarily due to the fact that I am currently funding my horse’s retirement years. It’s not a bad thing. I know I’ll be back someday. But around this time of year when my newsfeed is inundated with updates and photos from shows, I get a bit wistful. So, since I have no new showing stories to share, instead, I’ll recount my inauspicious start as a competitive equestrian. 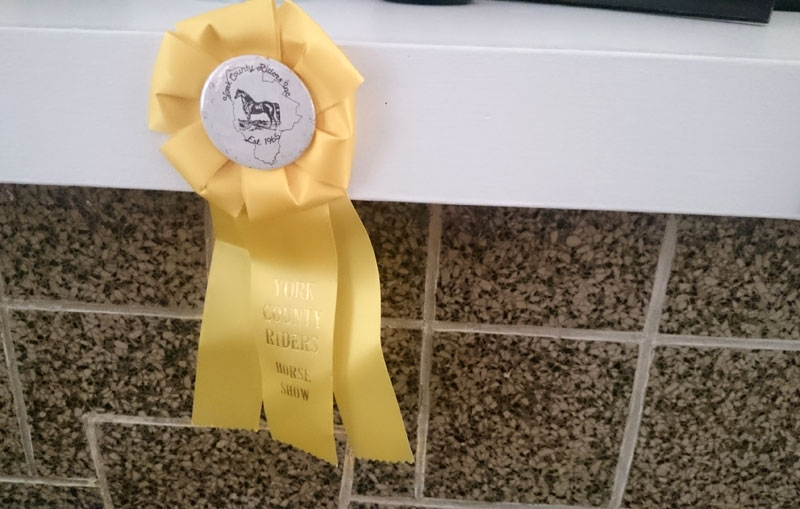 This was not a last place ribbon! Almost, but not quite.

I didn’t grow up showing horses. Like a lot of you, I didn’t have a horse of my own. I took lessons off and on for much of my childhood, but showing didn’t appeal to me for most of that time. I thought trail riding was where it’s at (I still feel that way, mostly.) But by the time I was in high school, I’d started riding with an instructor who was a compelling storyteller and made the showing days of her youth sound amazing. Somewhere in there, I caught the bug and decided showing was the way to go.

But I still didn’t have a horse, and that instructor, so evangelical about horse shows, didn’t really have any show-ready ones to offer. So my victory-pass dreams remained just dreams until I started riding at a show-oriented barn a few years later. This barn traveled to all of the local shows with its full contingent of lesson horses in tow for the horseless students to ride, which meant I’d finally get to have my time in the show ring.

My first show was a little one-day spring show at a county riding club’s modest outdoor arena. My favorite lesson horse, a seasoned campaigner named Ben, had been sold to another student just before the show. That meant I got bumped to my least favorite lesson horse, a sort of gangly, teenaged Saddlebred named Foxy. Foxy had been around the block and knew all of the lesson horse tricks (the fake spook was his favorite.) When ridden by a skilled rider, he could be put together into a reasonably appropriate show horse. I was not a skilled rider.

For such a long-awaited experience, I don’t have any specific memories of my classes at that first show. I don’t think Foxy did anything too devious, but in hindsight I imagine I rode like a passenger, perhaps trying too hard to maintain my shaky equitation instead of getting any kind of performance out of my mount. Nevertheless, the combination of low entries and the fact that it was a double-judged show meant that I left with an armload of ribbons. One of them was even second-to-last place instead of last (someone else in an equitation class botched a lead—one of the two judges saw it happen.)

I could have had a teenage meltdown for such an unimpressive result, but I remember not feeling bad about it at all. I was just happy to have joined the club of People Who Show Horses. And at the time, I went in with the mentality that I was riding an unimpressive schoolie and didn’t have a chance, so I don’t think I could have been disappointed. (The important life lesson that you should always ride like you have the best horse in the class came later.)

Fortunately, my show career did head upward from there, especially when I finally did get that first horse of my very own. (The one whose retirement is allowing me this time as a non-competitive rider.) But I still have at least some of the ribbons from that first foray into the show ring. Hey, I waited a long time for those.

So there’s where I got my start. Tell me about your first show in the comments below.