Home Equestrian Lifestyle Why I Was at the Barn So Late 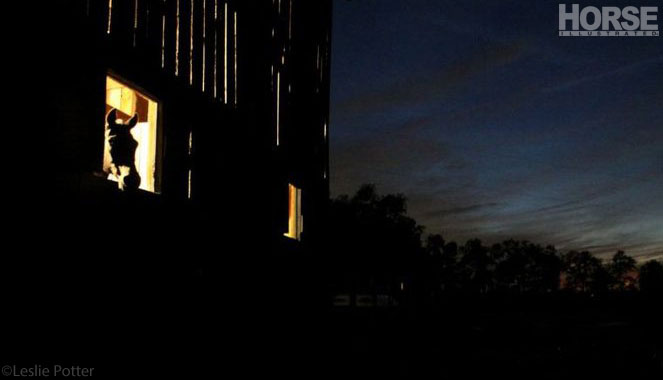 “Did you have a riding lesson tonight?”

“No, I just took Snoopy for a trail ride. I told you that.”

“Yeah, but I thought maybe you did both. You were out there really late.”

“Well, I got started a little late because I got into a conversation with one of the other boarders about the new cows at the farm. Snoopy likes them but her horse is scared of them. I wish I had some advice for her, but it’s not like I taught Snoopy to like the cows, you know? He just never minded them like the other horses do.


“Anyway, I was just going to take him for a little walk around the farm, but he was pretty energetic at the end and was being a little antsy about getting back to the barn, so I decided to take a loop around the back of the property instead of turning straight toward home. And I’ll admit that the sun was setting and the fireflies were coming out and it was pretty and I wasn’t quite ready to be done.

“We haven’t been back on that loop in a long time, and there was some kind of bird or something making noise in the bushes, so it took a lot of convincing to get Snoopy to head down that trail, you know? It took us, like, 10 minutes to get up a hill that is normally a 90 second walk.

“Once we got around there, he was pumped up again and we did what I call ‘practicing our passage’ but what is really just him jigging with his neck arched because he’s annoyed with me. I probably shouldn’t let him do that, but at his age, I let him get away with stuff. Anyway, he calmed down once he knew we were going home. He’s a good boy like that.

“So we got back to the barn and someone had left the grain room door open and when I walked up to it, a raccoon darted out! I’m not scared of raccoons, per se, but I didn’t really want a close encounter with one, so I had to proceed with caution. Later on I saw him climbing up the doorframe to go into the hayloft. I’m not sure where he went after that, but I kept checking for him every time I went into the grain room because I didn’t want him to jump out at me. I know that’s silly.

“So later when I was getting ready to put Snoopy out for the night, there’s this tarp in the aisle and it was rustling and I thought maybe the raccoon was nesting underneath it. Do raccoons do that? Anyway, suddenly one of the barn kittens came running out from under it. Then the other kitten joined in and they were taking turns hiding under the tarp and pouncing on each other. It was really cute, but the tarp happened to be right next to where I would have to lead Snoopy through to go outside, and I wasn’t sure how he’d react to a moving tarp. Horses are scared of tarps in general. That’s why it’s, like, a thing to train your horse to stand still while you drape one over him or get him to walk across one. They’re just scary.

“Of course I had no reason to worry. Snoopy looked at the kittens playing but he didn’t react. And then I realized, the kittens playing were adorable, but add in the unflappable old horse watching them and it’s YouTube gold! So I tried videoing them from a few different angles, but it was dark by then and the lights in the barn weren’t enough for video. Isn’t that always the way?

“Anyway, by then it was already almost 10:00 and I had no idea where the time went.

The Joys of Working with Quirky Horses