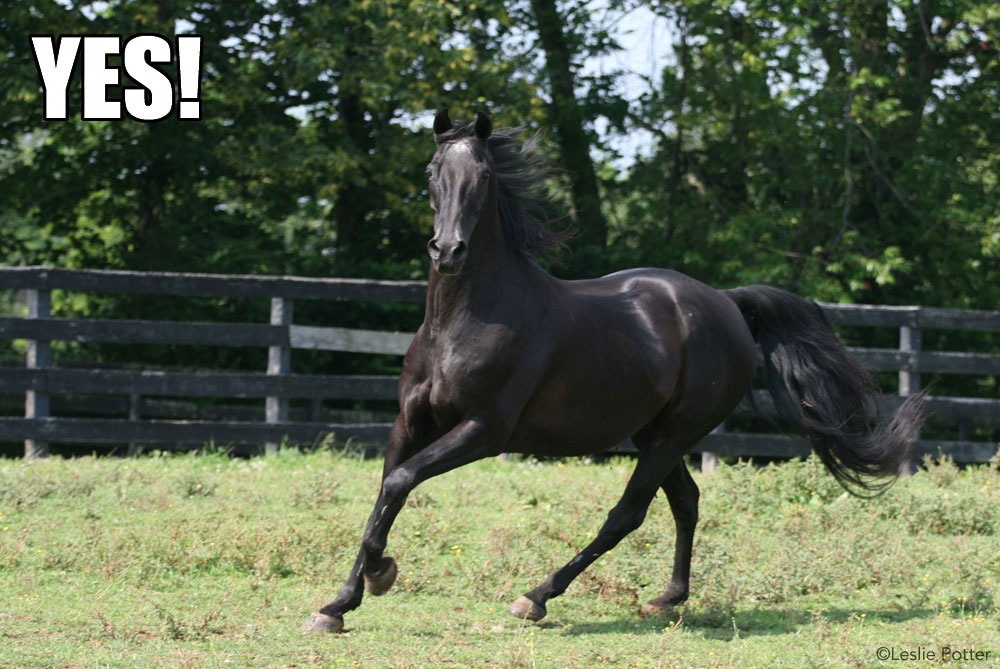 Shonda Rhimes is the show runner behind TV megahits like Grey’s Anatomy and Scandal. If I were as professionally successful as she is, I would absolutely indulge in solitude whenever possible. If you’ve gone out and proven your worth in your chosen career many times over, I say you’ve earned the right to sit on your sofa and read books and not talk to anyone if you don’t want to.

While I often think of The Near Side as the Grey’s Anatomy of sporadically updated horse-themed blogs, I will readily admit that Shonda Rhimes and I don’t have much in common. She’s driven and wildly successful. I mostly just hang out. But apparently we do both share the desire to go into hermit mode whenever possible. Rhimes’s sister chided her about this once; the story goes that while she was doing well by any measure professionally and in her family life, she was still routinely saying no to any and all social invitations. And even when your career is going gangbusters, work, home and nothing else is no way to live.

So, Rhimes decided to say yes to everything for a year and documented it in a book aptly titled “Year of Yes.” Inspired, I decided to do the same thing (except the bit about the book) and it turns out that saying yes to everything is really easy to do if you have a low-profile career and have established yourself pretty well as an asocial introvert whose crew consists of your dog and your Netflix account.

I decided to do a Shonda Rhimes Year of Yes for myself. So far, no one has asked me to do anything.

Okay, so, “yes” alone isn’t going to cut it for me. I’m going to have to make more of an effort. Here’s my plan on how to do this.

When my co-boarders are headed out for a hack, I’ll ask to tag along. This is low-commitment because Snoopy is the slowest moving horse in the greater Lexington area, so it’ll probably only be a few minutes before the polite thing to do will be to let everyone else go on ahead without us. But at least I’ll have chipped away at the image I just assume everyone has of me as the aloof lone rider.

2. Yes I Will Come to Your Party

Speaking of my co-boarders, what are their names, anyway? I’ve been boarding at the same farm for almost six years and I hardly know anyone there other than my immediate stall neighbors. My interactions are limited to friendly-but-meaningless “hellos” as we pass on the path around the farm. But I’ve been there so long that now it’s way too awkward to ask anyone’s name.

Once in a while, the barn does have a party or barbecue or something and I never go because I don’t know anyone. And I don’t know anyone because I never go. It won’t kill me to drop by these things once in a while. They take place at the barn. I’m probably going there anyway. Suck it up and go to the damn party for 15 minutes of your life, Potter.

One thing I did do in 2015 that I’ve long said I should do is volunteer at horse shows. I intend to do more of it in 2016, and it checks off a lot of boxes on the old resolution list. Volunteering at shows is helping out the local horse community as well as whatever charity the show is supporting in some cases. It can be educational, especially if you’re fairly new to the discipline of the show at which you’re volunteering. Bonus: When you see your horse’s turnout buddy of the last three years headed into the show ring, you can listen for the announcer and finally learn what that horse’s owner’s name is.

4. Yes, I Will Ride Your Horse

People have kindly offered to let me come ride their horses every so often as mine has aged and hit that state of semi-retirement. And I’m always like, “Yes, definitely!”

“Yes, definitely” is practically code for, “This is never going to happen.” Seriously, if you’ve ever witnessed (or been a part of) someone asking someone else out on a date and heard that response, you know it’s going nowhere.

“We should meet up for coffee sometime.”

But unlike the askee in the date scenario, I actually DO want to ride these horses. All of them. Please let me ride your horse. But because of my social anxiety and general ineptitude, I assume people are just saying that and don’t mean it and then I don’t want to put them out by actually following through. So, “yes, definitely” becomes never.

I shall heretofore replace “yes, definitely” with “How’s noon on Sunday sound?” At least when it comes to horses. Maybe not meeting up for coffee.

5. There’s a Clinic/Show/Schooling Ride Next Weekend…

Yes, I will do all of these things. I will not make the excuse that I have other plans when those other plans are sleeping in and then eating bagels (although I maintain that this is always a good plan). Again, my horse is retired, which gives me an automatic opt-out of a lot of these situations whether I like it or not (unless you’re offering to let me ride your horse, in which case, see point 4 above.) But if it’s an event where I can ride a school horse or something I can audit or volunteer at, then I will find a way to take advantage of the experience. Maybe I’ll even practice being friendly while I’m at it. (Whoa, slow down there, Tiger.)

If you see me out and about at equestrian events this year, come over and say hi. Or if you’re a fellow introverted equestrian, just give me the nod from a distance and I’ll understand.

Featured Video: This Is What Happens When T-Rex Goes Horseback Riding