I was sitting in the dentist’s chair this morning, my attention divided between the TV in the corner and my concern about that one sensitive molar. Then something on the TV caught my eye and I forgot about my teeth for a second. One of the Today show hosts was on a stationary bike, wearing a virtual reality (VR) headset, and the screen in the background was showing what looked like an animated version of those helmet cam videos we all love to watch. A horse’s head and neck in the foreground gave the perspective of riding. When the host turned his head to the side, the TV display showed what looked like a wing. I was intrigued. 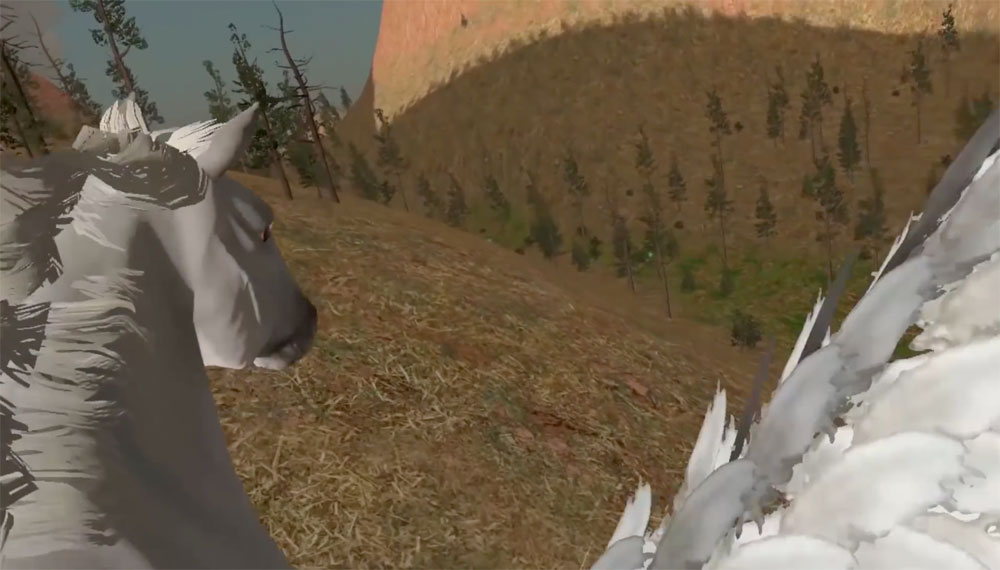 It turns out what I saw was a demo of the VirZOOM VR system. The game controller in this system is a sort of stationary bike with wireless sensors that track your movement. The handlebars have buttons similar to traditional game controllers. Take a look at this demo of the Pegasus game, Pegaso.

I’m a bit skeptical, but I’m also intrigued. I’ll begrudgingly run on a treadmill or use an elliptical at the gym when the weather is inhospitable for outdoor exercise, but I can’t stand the stationary bike for more than a few minutes. It’s so boring. And while I’ve never tried a spin class, the idea of loud music and someone yelling at me doesn’t make the idea of pedaling to nowhere seem any more appealing. But if pedaling faster helped me steer my Pegasus to more apples, I don’t know, maybe I could get into it.

There’s also a game called Stampede in which you ride a standard, non-winged horse in a western setting.

I am decidedly not a gamer. I’ve never understood the desire to blow off steam by shooting your friends (or random strangers, or computer-generated enemies.) However, I’ll admit there is a bit of appeal in the idea of working up a sweat while lassoing virtual horse thieves at the end of a long day.

I’ve also been pretty skeptical about VR in general, but I’ve had the opportunity to try a few different VR games in the recent past and was surprised by how truly immersive they can be. Sure, you look like a weirdo in big heavy goggles exploring a world no one around you can see. But if you can get past your self-consciousness, there’s the potential for cool things.

Now, this is not an attempt at recreating the experience of riding the way that, say, the eventing simulator is. You’re still pedaling a bike, which won’t feel like riding a horse. But the point is to get exercise while having fun playing a game, and I kind of think it might work.

At $200, the VirZOOM itself is cheaper than a lot of regular stationary bikes (or even the indoor bike trainer I optimistically bought years ago, currently sitting in my attic.) However, the VR headset isn’t included, so you’ll have to drop $600 or more for one of the three supported headsets (none of which have gone to market yet.) The VirZOOM itself is expected to be available sometime this year.