Home Equestrian Life The Parallels Between Running and Riding

As a rider, I struggle with seeing distances. Maybe it’s because I didn’t really start jumping until adulthood, or maybe I’m just plain bad at it. Sometimes I overthink it or second-guess myself, but a lot of times I don’t even get that far. Instead, whatever tolerant schoolie I’m mounted on gets within spitting distance of the fence and I just think, “I don’t know. You figure it out.”

I hate that I lack this skill. I was so fed up with myself after one lesson that I Googled “how to see a distance” and found a lot of results that, predictably, didn’t help. But I did come across one old message board discussion where someone who was probably as frustrated as me posed the same question. Several responders described how it’s not the concrete, step-by-step process a lot of beginners think it should be. They didn’t actually see a spot, then calculate how many strides they needed to get there, then act accordingly. Instead, thanks to many hours of practice, they would just know how to adjust their horse’s stride to get where they needed to be without having to think about it.

Makes sense, but if that’s a skill you lack, as I do, it seems like an actual super power.

Six Strides to the Curb

When I’m not riding or Googling “HOW TO RIDE HORSE,” I sometimes run. I usually run around town, which means on sidewalks. Sidewalks have cracks and curbs and other obstacles. At some point, I noticed that I was adjusting my stride to avoid these things without even really thinking about it. If I see a break in the pavement, I adjust my stride to go over it without having to take a huge leap or add in a tiny step. I just see it and know.

I spend 100% of my life with my own two legs, and I’ve taken them across many miles of pavement, so maybe that’s enough to make the stride adjustment second nature. Conversely, I’ve spent very little of my life jumping horses, and the lesson horses I ride range from stocky ponies to leggy Thoroughbreds, which means every experience is going to be different. It’s going to take a while for my jumping sense to reach where my current running sense is, I suppose.

In any case, I was thinking about this parallel the other day while out for a run with my dog. We reached an intersection where the plows had left a pile of snow on the corner. I took a leap over, but my dog hesitated briefly, and the unexpected tension on the leash was almost enough to cause me to land in the snow.

“That must be what it’s like for horses when their riders get left behind,” I thought.

What Have We Learned Here?

I’m trying to reassure myself by saying that this is evidence that, with enough practice, I will be able to see distances and ride to them correctly. But it also feels a little lazy, like I should be DOING more instead of waiting for experience to kick in. On the other hand, I did learn to walk and run on sidewalks without having to analyze my technique, and for the most part, I continue to do so successfully.

If you have advice for fixing my distance-blindness, leave it in the comments. There’s a small herd of lesson horses around here who will thank you for your help. 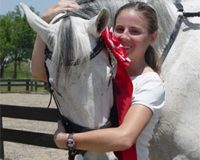