Home Equestrian Lifestyle I Regret Nothing. Well, Maybe One Thing 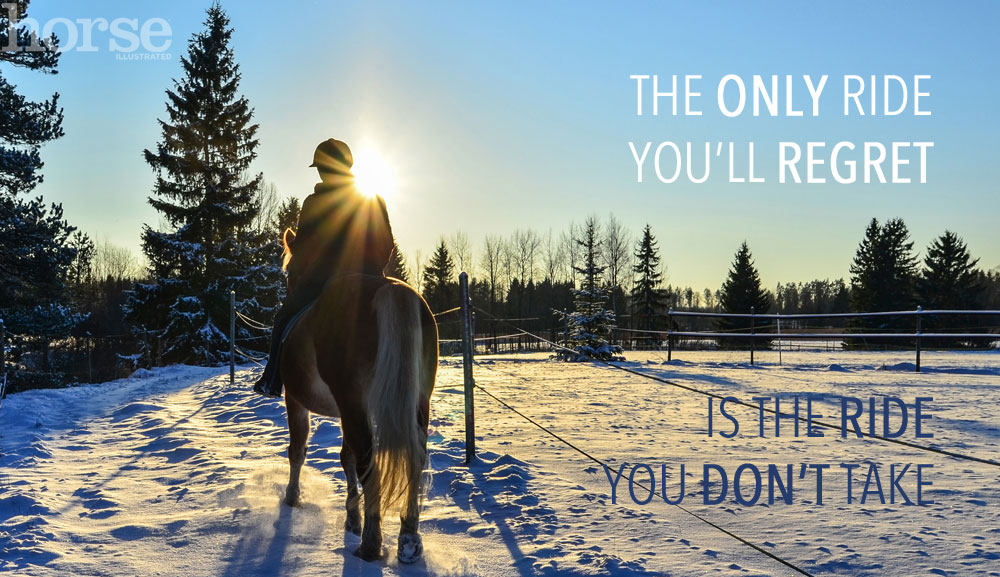 The only ride you’ll ever regret is the ride you don’t take.

This is the mantra I try to live my equestrian life by. In some 25 years of riding, I can’t think of a single episode where I look back now and think, “Wow, my life would be better if I hadn’t ridden that day.” Quite the contrary. When I think of the times in Snoopy’s younger years when I didn’t ride because it was inconvenient, I find all of my regrets. The lesson here is that you should always ride when you can. It’s never the wrong choice.

I was secure in that feeling until one week earlier this winter, when I decided to take advantage of what weather.com suggested would be a relatively mild afternoon and go for a lunch break ride. The temperature was set to reach 30—much warmer than it was during my riding lesson earlier in the week. The “feels like” temperature was closer to 20, but the sun was out. Not bad for January. A good day to saddle up the old horse and get him moving a little, I thought.


The Universe Drops Some Hints

My first clue that I was not going to have a good time outdoors should have been when I spent all morning in the office with the thermostat set to the higher end of reasonable and with a space heater running, and with my business casual* fleece on and still felt cold the whole time.

*I’m the only person who calls it that.

My second clue should have been when I got to the barn and all of the horses—in their blankets!—were huddled by the corner of the barn and the shelter that keeps them out of the wind, even though they would normally be napping in the sun at this time of day.

“Maybe we’ll make this a quick ride,” I said to Snoopy through chattering teeth as I brought him in the barn.

I definitely should have swallowed my pride when I accidentally hit myself in the face with Snoopy’s foam pad as I took it down from the saddle rack. Normally, this clumsiness would be a non-event, but it stuck in my mind because the thing was solid. It kinda hurt! But, I told myself it would soften up after being on Snoopy’s back for a minute and carried on.

Moments later, I hit another speed bump. I ride in a synthetic saddle, and the billets were frozen stiff. I could barely put the girth on, much less tighten it up. But by then Snoopy was practically tacked up and it wouldn’t make any sense to back out now. Instead, I attempted to warm up Snoopy’s bit (which is a plastic Happy Mouth and therefore shouldn’t have felt icy like a metal bit—what is this, warning sign number five? Six?), put on the bridle, and off we went.

Within a few minutes, I regretted wearing my usual barn coat instead of the super-heavy, let’s-climb-Everest coat that I’d left hanging in the office back when 30 degrees sounded warm. A few minutes after that, I wished I’d gone bareback for the benefit of a heated seat. And finally, about 15 minutes into the ride, I was ready to be done. I would have just pulled the plug if we were in the ring, but we were across the farm from Snoopy’s barn, and the frozen, uneven footing on the formerly-muddy path made it unfair to ask his old legs and feet to do more than walk back. So I had another 15 minutes to think of all the decisions I’d made to get to this point and ponder the ice cream headache I was starting to feel across my forehead, just below my helmet.

Now, I can hear your thoughts floating down from up north. Wimpy Kentuckian. Can’t even deal with 30-degree weather! And this is where I remind y’all** that I spent the first 27 years of my life living in Maine where the state pastime is digging your way out of snowbanks for the 10 months of winter and swimming in the frigid Atlantic ocean during the two weeks of summer (the remaining month and a half is spent slipping in the mud.) I know from cold, and it was cold out there. Go ahead and winter-one-up me from your home base on the frozen shores of Lake Cocytus. It won’t make my cold any less cold.

I can’t explain why this (allegedly!) 30-degree afternoon ride felt so much colder than every sub-freezing ride I’ve enjoyed (or at least tolerated) in my life. What I do know is, while I’m not willing to say that I regret that ride, I was glad when it was over.

But here’s the real kicker. If I had examined weather.com more closely I would have seen that the following day was set to reach a high of 51 with almost no chance of precipitation. Would it have killed me to wait a day? No. No it would not. Which is why I’m adding another mantra to my personal philosophy of equestrianism, reserved for very special cases. 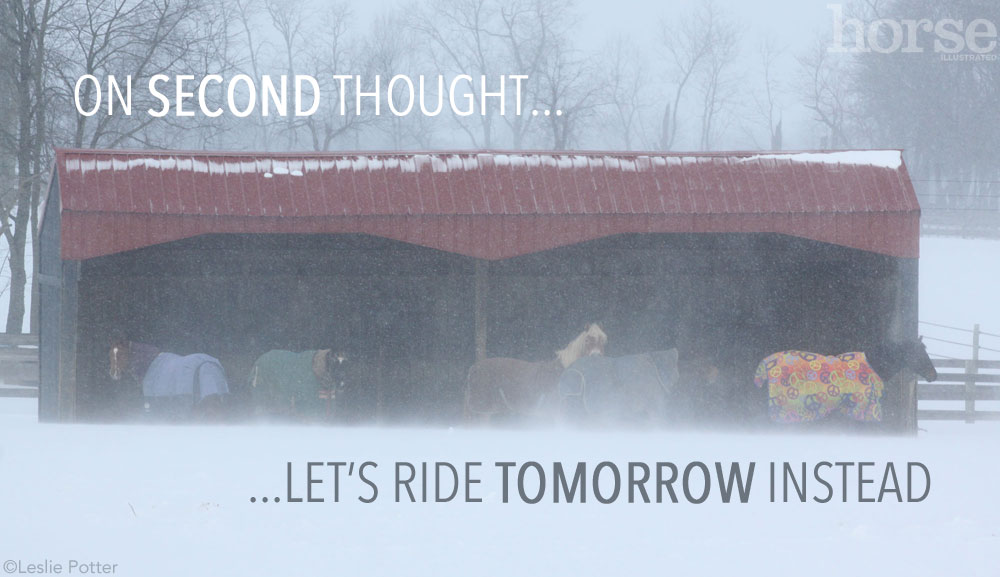