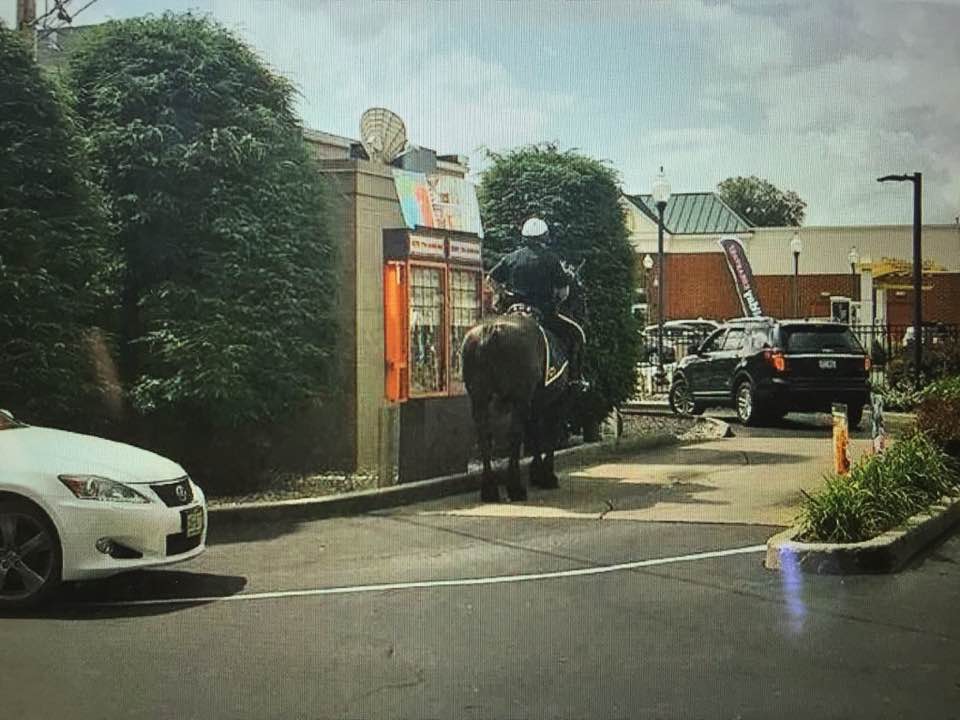 My family had this great dog: a Siberian Husky named Puck. He had an independent streak, like many Huskies, but he quickly became a fan of life with humans thanks to some of the perks. He liked belly rubs. He enjoyed taking over the sofa. Best of all, he liked car rides, especially when they went through the drive-thru.

Puck learned that when the human was stopping at Dunkin’ Donuts for a hit of caffeine, he could usually charm a Munchkin (that’s a doughnut hole, for those of you on the other side of the Dunkin/Krispy Kreme line) out of the human at the window. His eyes would get big like a baby animal in a Disney movie and he’d affect an attentive yet playful expression as he repeatedly tilted his head to one side, then the other.

“Aw, can he have a Munchkin?” the cashier would ask. Every time.

He was really good at it.

Puck might have had some competition for cutest patron if our Dunkin’ Donuts had been along the route of the local mounted police, though. A story out of Saratoga Springs, New York, showed Officer John Sesselman and his police horse, King Tut, waiting in line at a local Dunkin Donuts. The pair reportedly purchased a coffee and a Munchkin.

Horses in drive-thrus are nothing new, though. Local news outlets and individual social media accounts report such sightings with surprising regularity. The results are varied depending on who’s working the window—sometimes the horses are seen as an endearing addition to a line of motorists. Other times their riders or drivers are asked to leave. I see both sides—there’s certainly a safety risk any time you take a horse somewhere that is meant for cars. On the other hand, it’s quaint and charming to see horses around town, and when it’s a city-savvy equine like King Tut, who can argue?

And now, for your enjoyment, here’s a social media round-up of horses in drive-thrus.

And for good measure, Puck the Doughnut Hunter.