Tendon and ligament injuries are among the most common and concerning injuries that affect athletic horses of all breeds and disciplines. Injuries such as a bowed tendon or strained suspensory ligament carry fear, sadness, and frustration for horse owners who may be concerned that such injuries mean the end of their horse’s riding career.

What is a Tendon or Ligament?

Structurally, tendons are ligaments are similar to ropes. That is, they’re one large fibrous structure made up of many individual fibers. They are critical in supporting and/or transmitting forces throughout the horse’s musculoskeletal system. There are dozens of tendons and ligaments in the horse’s body, although the ones that are of most common concern are in the horse’s lower limbs.

Tendons connect muscles to bones. When muscles contract (which is the only thing that muscles can do), the force of contraction is transmitted to the bones via the tendons.

Ligaments, on the other hand, connect bone to bone. Ligaments are like shipping tape used to hold two boxes together (with the boxes being bones in this analogy). Ligament functions are more passive than those of tendons, but certainly no less important.

How do Tendon and Ligament Injuries Occur?

In general, injuries to a horse’s tendons or ligaments occur in one of two ways: suddenly, or over time. Sudden injuries are perhaps easier to understand, and occur after a single incident or accident where the forces placed on the horse’s limb exceed the strength of the tissue.

An awkward step, unexpected blow, or misplaced limb can result in immediate and obvious damage to a tendon or ligament, usually resulting in swelling, pain and lameness. However, sudden injuries appear to be the exception rather than the rule.

Most tendon and ligament injuries occur over time from chronic stress and fatigue to the tissues. Stress and fatigue is what causes a paper clip to break when it is bent back and forth repeatedly. A single bend causes no apparent damage or weakness; repeated bending in the same place causes the clip to weaken and snap.

Repeated stress to tendons and ligaments without adequate time for rest and recovery, such as can occur when horses are overtrained, causes strain and injury to the tendon or ligament fibers. While the damage can be occasionally be catastrophic, in most cases only a relatively small percentage of the fibers are damaged.

How are Tendon and Ligament Injuries Diagnosed?

It’s usually not difficult to see the signs of injuries to tendons and ligaments. They are often accompanied by signs of inflammation that have been recognized since the days of the Romans.

What Treatments for Tendon and Ligament Injuries Work Best?

In humans, the gold standard for immediate treatment of tendon and ligament injuries is known as RICE therapy:

Medication to control pain and inflammation, such as non-steroidal anti-inflammatory drugs, are also a cornerstone of post-injury therapy. The goal of such medications is not necessarily to make the horse pain-free; rather, it is to help control the inflammatory response. The use of such medications should be short-term and as prescribed by a veterinarian.

After the acute injury has been treated, successful rehabilitation usually requires several months of controlled, increasing exercise, depending on the severity of the injury. Exercise increases both in time and intensity as the injured limb heals.

Monitoring of the healing process by serial ultrasound examinations is often recommended to make sure that the rehabilitation process is occurring without making the injury worse.

Do You Need to Use Expensive Treatments for the Best Results?

There are few parts of the horse that have received more therapeutic attention than the tendons and ligaments. The past several decades have seen the rise and fall of therapies such as tendon splitting and stabbing, laser therapy, various light devices, magnetic boots, pulsating magnetic field therapy, Bapten (an injectable therapy thought to help direct the healing process), Adequan, bone marrow injections, and many others.

More recently, therapies optimistically and perhaps disingenuously referred to as “regenerative” have entered the fray, leading to treatments with therapies such as platelet rich plasma or any number of stem cell regimens (which themselves are now under increasing scrutiny).

To date, the only thing that can be said about such therapies is that, in spite of their enthusiastic, optimistic, earnest promotion and application, none have been shown to increase the quality of repair or decrease the time required for recovery injury compared to the tried-and-true methods of rest and rehabilitation. And all of them increase the cost of care. 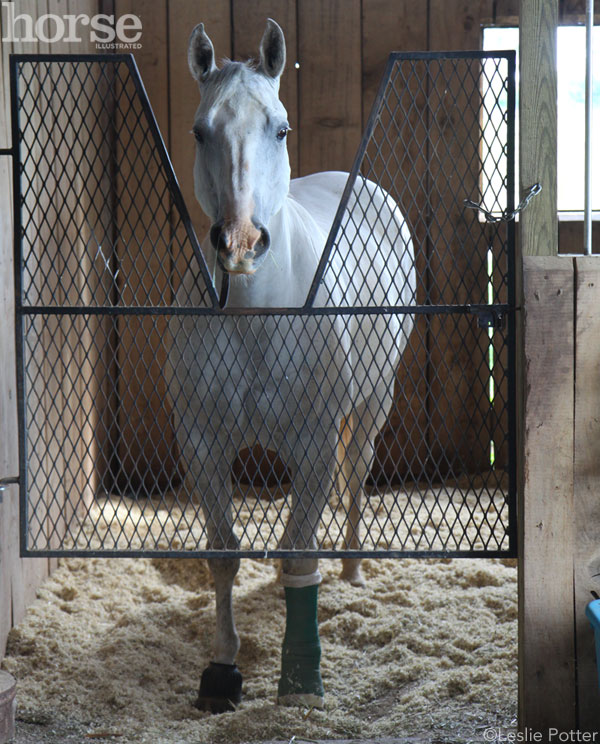 How Long Does Rehabilitation Take?

As with any injury, the prognosis for recovery and the time needed for successful rehabilitation of tendon and ligament injuries is directly related to how severe the injury is. The more damage that is sustained, the more difficult it is for the horse to recover.

The prognosis for recovery is also dependent on what is expected of the horse after injury; the prognosis for a horse to go back to pleasure or trail riding after an injury is far better than that for a racehorse that will be running at full speed. In fact, racehorses with tendon or ligament injuries may go on to find happy and useful homes post-racing as pleasure and trail horses.

Can a Horse Ever Be Considered Completely Recovered?

Understandably, tendon and ligament injuries are one of the injuries of most concern to horse owners. Unfortunately, none of the many therapeutic options that have been presented over the past several decades have resulted in measurable improvements in the quality or speed of healing.

Fortunately, and although there are notable exceptions, most horses that suffer from such injuries can go on to lead productive athletic lives after a slow and careful recovery.