There’s a feeling you get when you are watching sports history unfold. It’s hard to describe since it is a mix of emotions— pride, awe, happiness and amazement—at what the athletes are able to accomplish. Tonight’s Olympic action in Tokyo in the FEI Grand Prix Special in dressage did not disappoint, especially for Team USA as they vied for a gold, silver, or bronze medal. There were stellar performances by veterans to  personal bests by first-time Olympians.

The top eight teams from the two days of Grand Prix competition moved forward to Tuesday’s Special with the 24 horse-and-rider combinations being split into three groups. Each group comprised one rider from each of the eight countries, with the first two groups being assigned ride times.

Then, the riders in the third group were assigned an order of go based on how their teammates had performed in groups 1 and 2, thus determining what their country’s preliminary team score was from the two riders before the final rider from each country. The riders in the final group performed in reverse order of their country’s team score, so the lowest ranking team riders went first and so on.

Determining the final placings came down to the wire since the competitors’ roster was so full of talent. In the end, the powerhouse German team of three ladies―Dorothee Schneider riding Showtime FRH, Jessica von Bredow-Werndl riding TSF Dalera BB and Isabell Werth riding Bella Rose―took gold as many had predicted. All three scored over 80 percent and each are currently ranked in the top ten in the FEI standings (Werth and Bella Rose are ranked first; von Bredow-Werndl and Dalera second, and Schneider and Showtime sixth.) Their final team score was 8178.0.

The fight for silver and bronze was more intense. The U.S., British and Danish Teams duked it out for the silver and bronze medals. Adrienne Lyle on Salvino was first in the sand for the U.S., and they laid down a solid, accurate test, which earned a 76.109 percent. Steffen Peters and Suppenkasper glided around the arena, showing a lovely test that earned a personal best for the longtime partners with a 77.766 percent.

Olympic rookies Sabine Schut-Kery and Sanceo anchored the U.S. team and were third to last to go. They received a career-high 81.596 percent for their efforts. The team score for the U.S.A. was 7747.0, which was enough for the U.S. to top Great Britain’s talented squad by 24 points to take the silver.

Schut-Kery spoke about her first Olympic experience and her ride on Sanceo today. “For me, it was the first time here at the Olympics, and it was quite intense to wait that long [in the warm-up ring]. I am so proud of my horse, my team, my owners, the coaches. It has been really, really great experience. I think I am still a little bit speechless. I just want to go and feed my horse carrots!”

The other big story of the week was the impending typhoon, which made landfall about 100 miles away from Tokyo today. Heavy rainfall and gusty winds of up to 75 miles per hour were forecast for the city and surrounding area, but in the end, only a little rain fell before the start of competition, although dark clouds did threaten a few times. Luckily, the weather was a non-event after all.

The final day of dressage is the FEI Grand Prix Freestyle tomorrow with 18 competitors facing off for the individual medals, and all three Silver-medal winning riders on Team USA are qualified for their last competition day at the Olympic Games Tokyo 2020.

See full results and scores here for the eight teams, as well as individual rider scores. 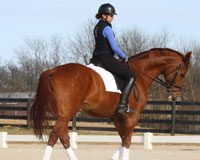