Home Riding and Training English Riding Turn on the Forehand

After your horse understands the basic “whoa and go” aids in the walk, trot, and canter, and you can make basic figures such as a 20-meter circle and three-loop serpentine, it’s time to introduce him to the concept of moving both forward and sideways.

Until now, a squeeze with your calf has meant “go forward” to your horse. So how do you explain to him that pressure from your legs can have multiple meanings, like moving simultaneously forward and sideways? By breaking it down into the simplest components.

Introduce the concept with the elementary exercise known as the turn on the forehand, in which the horse’s front legs stay in one spot while his hind legs step around his forehand, away from one of the rider’s legs.

You won’t find the turn on the forehand in any dressage tests. It’s not a dressage “movement” in the strict sense because there is no forward component. But it’s essential in practically every equestrian discipline because controlling a horse always entails controlling his hindquarters (some western trainers call it “moving his feet”).

From a practical standpoint, if a horse is yielding his hindquarters to the handler or rider, he can’t bolt, buck, or rear. 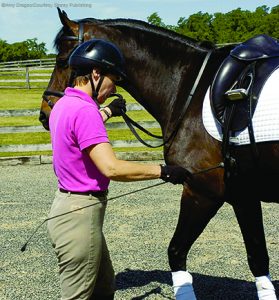 Start From the Ground
Introduce the turn on the forehand from the ground. With your horse tacked up and halted, stand facing his left shoulder and hold both reins in your left hand, a few inches below his chin.

With your right hand, nudge him with the handle end of a whip just behind the girth, where your lower leg would be, while you gently vibrate the reins to help him get the idea that you don’t want him to simply walk forward.

Continue giving little nudges with the whip until he takes a step to the right with a hind leg away from the pressure. Immediately cease the aids and praise him. Repeat the exercise in the opposite direction.

Gradually work up to a quarter-turn, a half-turn, and a full turn on the forehand, with his hind legs stepping evenly while he remains relaxed and in balance. You want him to learn to step away promptly when he feels the aid, but there are no bonus points for speed—it’s not about spinning in a circle.

Turning While Mounted
Next, try the turn on the forehand while mounted, starting from the halt.

Your inside leg (the one that’s asking him to step away) substitutes for the whip handle, gently tap-tap-tapping his side just behind the girth until he takes a step sideways.

As you did from the ground, vibrate the reins gently (don’t pull or hang) to tell your horse, “Stay here on this spot with your front legs.” If he walks forward, quietly halt and ask again.

Don’t draw your lower leg back, clamp it on, or kick harder if you don’t immediately get the response you are looking for. Just keep “annoying” his side like a pesky fly until he offers a sideways step, then immediately relax your aids and praise him.

As you did from the ground, gradually work up to full turns in both directions.

JENNIFER O. BRYANT is the editor of USDF Connection. She is the author of three books, including The USDF Guide to Dressage.