The first day of the FEI World Equestrian Games Tryon 2018 started with some problems in the endurance race but ended with a successful team effort in the reining arena.

The endurance ride was the first competitive event of this WEG, scheduled to begin at 6:30 a.m. on Wednesday, September 12. However, after the race started, several riders were misdirected and went off-course. The officials made the decision to stop all of the horses at the first vet check, hold them for 45 minutes after the last horse arrived, and restart the race as a 120 km ride instead of 160 km.

The ride continued with this backup plan, but ultimately North Carolina’s September weather put a stop to it. A combination of heat and humidity along with downpours that deteriorated the trail conditions led to the decision to cancel the race before its completion.

“This was a difficult decision to make,” said Thomas Timmons, President of the Veterinary Commission. “But it was done with horse and athlete welfare in mind as the conditions this afternoon after the rain resulted in extremely high levels of humidity and, combined with rising heat, it was deemed unsafe to continue the ride.”

The first medals of the games were awarded tonight with the team reining competition. The team from the United States continued the winning streak that dates back to 2002, when reining was first included in WEG. This year’s team members were: Cade McCutcheon and Custom Made Gun; Casey Deary and Heavy Duty Chex; Dan Huss and MS Dreamy; and Jordan Larson and Arc Gunnabeabigstar.

The Americans won handily but they were challenged by an enthusiastic team from Belgium, which finished in silver medal position, and Germany, which took the bronze.

Today’s team competition was also the first qualifying round for individuals with the top 15 riders moving on to compete for individual medals. Riders who didn’t make the cut in this round will return tomorrow for a second chance at qualifying.

All four of the Americans qualified for individual competition; Cade McCutcheon and Custom Made Gun put down the top score of the first round in their WEG debut. If his name sounds familiar, that might be because his parents, Mandy and Tom, are both veterans of previous US Reining teams.

Dressage on Day One

The first half of dressage competitors took their turn in the arena today for the Grand Prix. Scores from this round will count toward determine team medals and count toward individual standings.

Adrienne Lyle and Salvino are currently the top-placed American pair. Lyle is a veteran of the 2012 London Olympics and the 2014 WEG in Normandy, France, with her previous top mount, Wizard. Salvino is an 11-year-old Hanoverian stallion.

American Steffen Peters also rode today, landing in seventh place with the Dutch gelding, Suppenkasper. Peters has represented the U.S. in several Olympics and WEGs, most recently with Legolas 92 as part of the bronze medal winning team from the 2016 Olympics in Rio.

Americans Kasey Perry-Glass with Goerklingtgaards Dublet and Laura Graves with Verdades are scheduled to ride tomorrow in the second half of this team competition. They’ll be joined by past WEG and Olympic gold medalists including Charlotte Dujardin, Isabell Werth, and Edward Gal, so expect some new scores at the top of the leaderboard.

Your WEG Moment of the Day for Wednesday, September 12: Annabelle Collins of Bermuda celebrates and thanks her horse, Joyero VG, after their successful Grand Prix test at #Tryon2018. 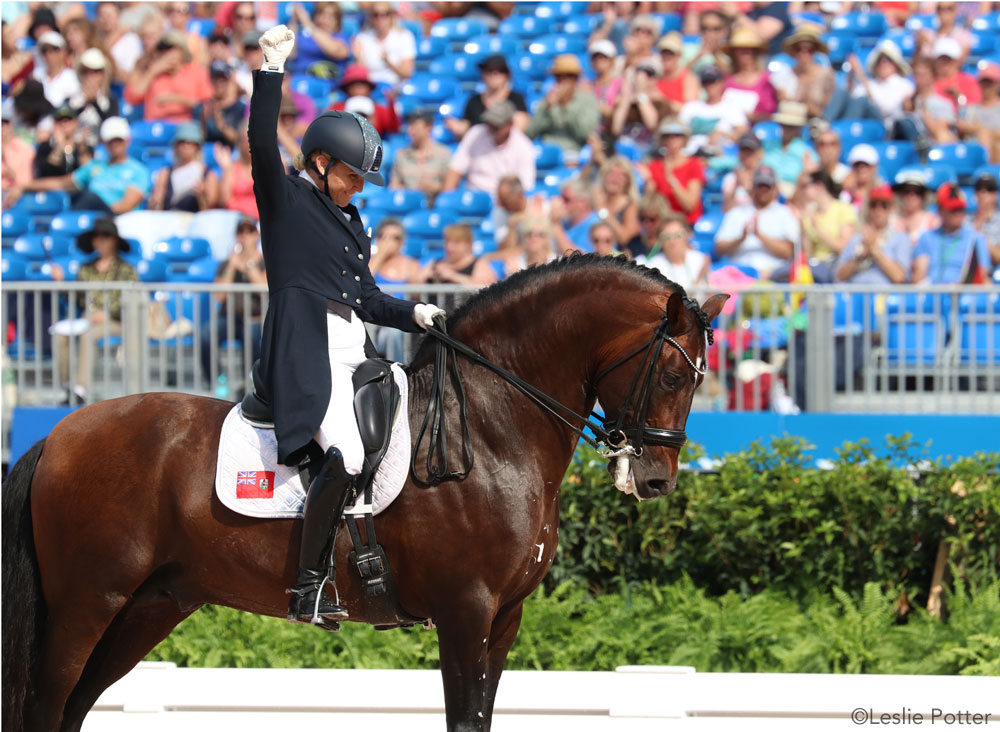 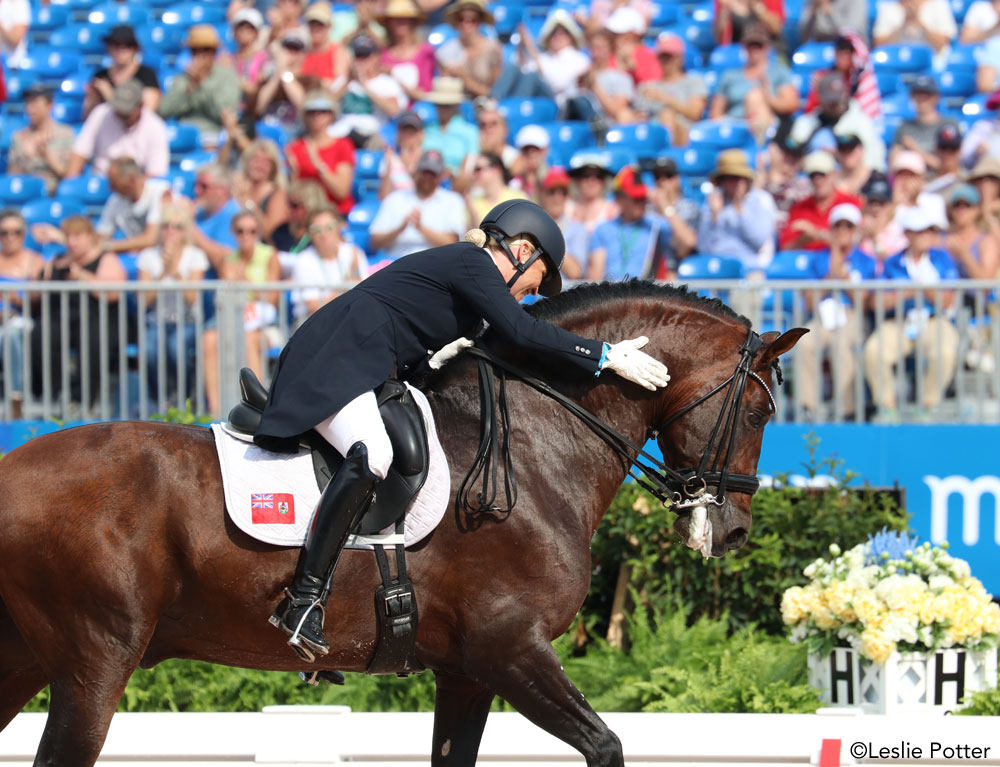