During Week 1, held January 8-11, Chef d’Equipe Michel Assouline led the U.S. Para Dressage Team of David Botana, Rebecca Hart, Kate Shoemaker, and Roxanne Trunnell to top honors in the team competition in Wellington, Fla. The respective FEI Team Tests and FEI Individual Tests on Thursday and Friday counted for the team competition, while Saturday’s FEI Freestyle Tests were an individual competition for the top one-third of the combinations per grade.

“All the riders did really well, which is great,” Assouline said. “I’m pleased with the group of riders; they did better tests and were better prepared for the competition. The team had our best average ever on the world stage with a score 75.55%.”

Trunnell, of Wellington, Fla., had a phenomenal week of competition with Dolton, earning personal best scores, breaking into the 80% threshold and sweeping the Grade I CPEDI3* classes. She and the eight-year-old Hanoverian gelding owned by Flintwoode Farms, LLC, and Karin Flint impressed the judges to earn a score of 81.131% in the FEI Grade I Team Test. They then earned 81.964% in the FEI Grade I Individual Test. Trunnell and Dolton continued to show their skill by earning 83.167% in the FEI Grade I Freestyle.

“Roxanne Trunnell bumped up into the limelight this week,” Assouline said after the team competed. “When I saw [Dolton] as a young horse, I knew he had the makings of a world-class para dressage horse. He and Roxanne have developed a wonderful partnership. I knew the scores would come, but it was only a matter of how long.”

During the U.S. Para Dressage Team’s second official outing of the 2020 season, they captured another win. Team competition began on Wednesday, January 22, and continued on Friday, January 24, while the individual FEI Para Freestyle Tests were hosted under the lights on Saturday evening. The team of Beatrice de Lavalette, Marie Vonderheyden, and again with Hart and Trunnell, who were all led by Chef d’Equipe Michel Assouline.

“We had in mind that we were going to try new combinations this week and what we did was put Beatrice and Marie into the group, and they did very well,” said Assouline. “Marie was very consistent and finished on good scores. She had a high individual score of international quality in the freestyle, and Beatrice did very well too. She had a great score the first day. She is going to continue working on fitness this spring, and she was able to score into the 70’s, which is what we want to see.”

“Roxanne and Rebecca did brilliantly,” continued Assouline. “Roxanne did extremely well. As a coach and an observer, the quality of the work was incredible. I think it was one of the best freestyles she’s ever ridden and she’s maintaining her progress. Rebecca experimented and rode in a double bridle on the second day, which she hasn’t done in a long time, and we felt that it was a good decision. She had a great score in the freestyle and the individual test. Our aim is to carry on with this progression and the final target is the June CPEDI in Tryon.”

Competing for the first time this year with the Adequan U.S. Para Dressage Team, Lavalette, of Lake Worth Beach, Fla., rode Duna, a 12-year-old Dutch Warmblood mare she co-owns with Elizabeth de Lavalette and Nicolas de Lavalette to wins in both the FEI Grade II Team Test and FEI Grade II Individual Test with scores of 71.263% and 67.490%, respectively. The pair finished their weekend with a second place in the FEI Grade II Freestyle with a score of 71.156%.

Both weeks of CPEDI3* competition at the Adequan Global Dressage Festival this year have coincided with an FEI CDI dressage competition, and Assouline commented on how the schedule created added excitement and interest in the U.S. Para Dressage program and its athletes.

“It was such a different atmosphere running with the CDI. We had so many people engaging with the program and our athletes. I think the competition schedule was very beneficial, not only for our competing athletes, but also successfully brought more exposure and interest in the program, which is very promising,” he concluded.

Stay up to date with the Adequan U.S. Para Dressage Team through USA Para Dressage on Facebook and US Equestrian on Twitter and Instagram. Use #USAParaDressage. 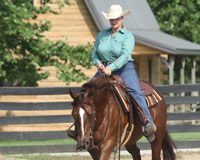 Question of the Week: Out-of-Control Canter