The sick pony stared miserably at me as I approached her pen. She was huddled in the corner, a steady stream of foul green liquid flowing from under her tail. This looked like a bad case of true diarrhea. Her flanks were drawn up tightly, and she looked like she had lost a great deal of weight. This was not going to be a quick visit, and I hurried back to my truck to get some exam gloves on and change into muck boots, which are easier to disinfect than leather work boots.

I wasn’t bothered when the ranch said they had another horse for me to see, as this was a common occurrence at their place. I knew which farms and ranches were most likely to do this, and I’d schedule the length of my visits accordingly; it was extra income for me, so I wasn’t going to complain. But when I looked at the little pony, I knew that I was going to have to cancel the remainder of my calls for the day.

I never like to see true diarrhea in a horse. Every spring I get concerned calls about abnormal manure, and it usually turns out to be a loose version of normal, thanks to the lush spring grass.

True diarrhea lasts for 24 hours or longer, fouls the tail and legs, and resembles a flow of water from a hose or a pipe, hence the term “pipestream diarrhea.” It’s very dangerous, as it can quickly strip a horse of vital electrolytes and proteins, causing a life-threatening dehydration. Horses can go into shock and die from uncontrolled diarrhea, and as I studied the little pony, I could see that she didn’t have much time left.

This sick pony was shaky on all four legs and struggled to hold her head up as I checked her vitals. I was so horrified by the numbers on the thermometer that I reset it and tried again.

107 degrees! I’d never seen a temperature that high on a horse that survived, and her heart rate in the high 70s wasn’t reassuring either. Her gums were pale, and I could hear the furious gurgles from her intestines as they released another toxic flood of liquid down her legs.

We had to try to help her. I gave the owners a very guarded prognosis and we got to work. The ranch hands dragged a hose over and took turns running the cool water over her back, belly and legs.

My technician placed an IV catheter into her jugular vein and we hooked up two large bags of fluids, running them into her as fast as they would go. I had two more bags ready to switch over as soon as the first two ran dry. I added some calcium gluconate and dextrose to the fluids and watched her anxiously as the liquids flowed into her catheter. I didn’t dare give her anything else until she was rehydrated.

She stood in a daze, and I rechecked her temperature. 103.8 degrees. Still high, but better. Finally, she urinated. At first it was an alarming orange color, but it soon changed to a more normal yellow. Cautiously I gave her a dose of a drug to help with pain and to try to protect her from the effects of the severe disruption of her gut.

After another hour she started to look brighter, with some of the anxious look leaving her eye, and tried to nibble some of the grass under her feet. As I hung two more bags of fluids, the ranch hands brought her some hay and she munched slowly, the first food she’d taken in several days. When they were finished, she got more IV medications, including antibiotics, and a dose of an oral drug I’d found handy for treating diarrhea.

Let’s do the Time Warp

The ground around the pony looked like a vet truck had exploded in the vicinity, with used gloves and packaging from numerous medical supplies strewn everywhere. I realized that I was hungry, thirsty, had a sore back and needed to hit the restroom, and that three and a half hours had passed.

Feeling like we’d emerged from a time warp, we cleaned up the mess and left her for the night, the capable ranch hands watching over her. They’d call if anything changed.

I returned the next morning and she was brighter, but her vitals were still scary, and the horrible diarrhea was raging fiercely. I passed a stomach tube and gave her activated charcoal and a clay compound that helped stabilize unhappy intestines. We ran more fluids. When the fluids stopped, I gave her more drugs. After the drugs, I ran more fluids.

I knew the vet bills were growing and had to accept that I might be handing the owner a dead horse and a huge bill at the end of these heroics. Did I stop treatment or keep fighting for her? It was an unenviable position and one with no good answer.

Fortunately, the owners wanted me to continue despite the risks. Once again, I was grateful to have excellent clients, and I kept going. And to my delight, over the next week the pony gradually stabilized and the manure slowly returned to normal. The complications that I’d dreaded—laminitis, chronic colitis—never happened, and day by day her sides filled out and her coat grew shiny.

I disinfected every item on my truck and restocked everything that I’d used, adding a case of small boxes to my top drawer. If I ever got a 107-degree temperature again, I was ready to recheck it with a brand-new thermometer.

This article about a sick pony and her diarrhea originally appeared in the October 2018 issue of Horse Illustrated magazine. Click here to subscribe! 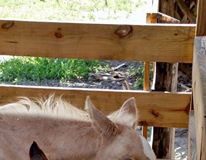