Read the Vet Adventures article more to learn from a veterinarian about saving a horse named Easter during a miraculous recovery from choking. Readers may remember an earlier column about “March” and his owner, “Linnea” (The Last Straw, August 2017). March had choked on wood shavings, and I’d feared his esophagus had ruptured. I was certain he would not survive the night, but he fooled everyone and recovered. March’s real name is Easter, and Linnea is really Caroline, and with her blessing, I’d like to share another chapter in the nine lives of Easter. 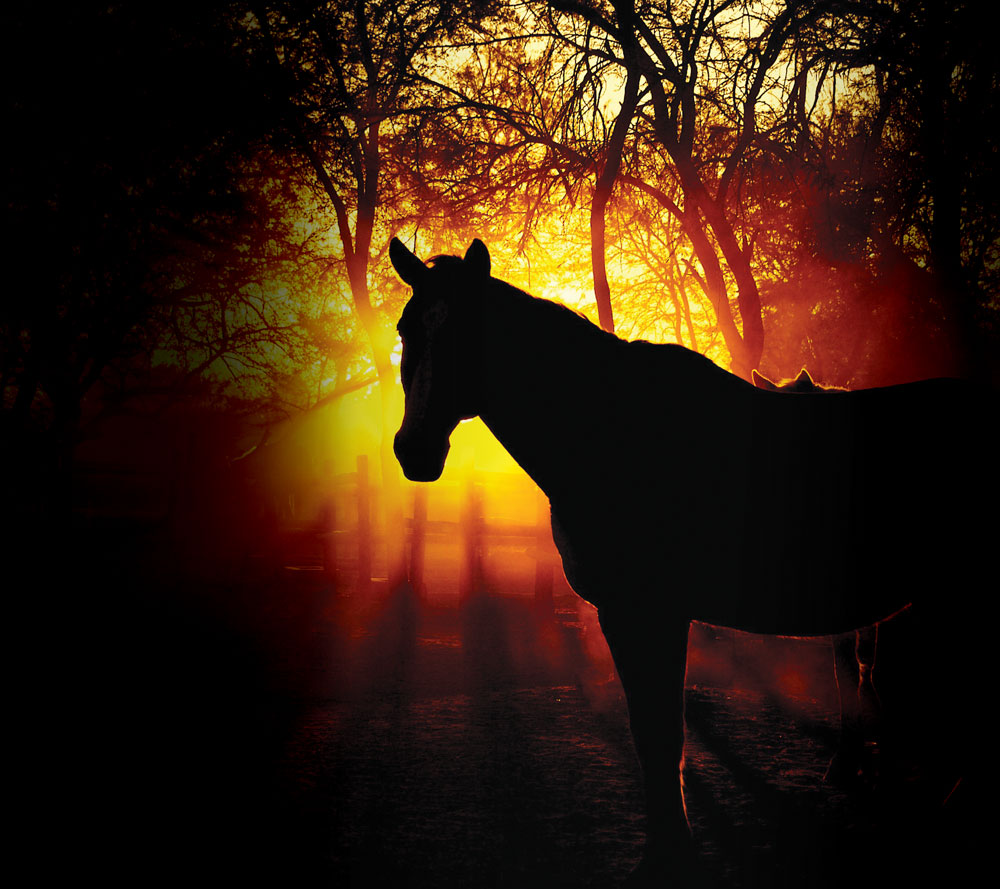 Easter and his Mini Horse sidekick had gone to live at a retirement home, where Easter choked again and aspirated the fluid. It was uncertain whether he’d pull through, but once again, the horse rallied and pulled a miraculous recovery.

Then it happened again. Despite written explanations about how to properly soak Easter’s feed, someone had fed him dry beet pulp pellets, which quickly swelled to a painful impaction in his esophagus.

Easter stood in his loafing shed the whole day, head hanging low and shaking in pain. It was eight hours before Caroline and I were finally contacted to help him, and we hurried up with a trailer in tow.

We could see his dim figure huddled miserably, and quickly got to work. I gave him pain medicine and a sedative to help relax his esophagus. I tried several times to pass a stomach tube, but failed again and again. Easter refused to swallow, and I went back and forth, trying each nostril. Easter swayed in place, muscles quivering and emitting great gagging coughs at intervals, foam and fibrous material spraying from his nose and mouth.

Caroline was frantic, trying to comfort him. I took a deep breath and tried for what felt like the hundredth time to pass the tube gently up his left nostril, but again it bumped against the back of his throat. I nudged it gently, and suddenly Easter swallowed—I finally felt the tube slide into his esophagus.

My excitement was short-lived, as the tube slid in only a few inches and came to a dead halt against the beet pulp impaction. Easter was now uncoordinated from the sedative, and I didn’t dare give him another dose.

We gently pumped water into the tube, letting it flow out as the impaction softened around the water. We slowly lavaged bucket after bucket of water down the tube, but a beet pulp impaction is no joke. It was a solid hour before the thing finally cleared, and I was able to advance the tube into his stomach and give him a much-needed dose of dextrose and electrolyte water.

I was pulling the tube free and congratulating myself for saving Easter yet again, when suddenly I noticed that his breathing had become very rapid and labored. His gums were a pale bluish color. Alarmingly, deep gurgles of liquid rattled in his chest with every breath. He shook and staggered around, his eyes rolling. His heart rate was in the 80s. Horrified, I pressed my stethoscope to his chest. I could only hear the referred gurgles from his trachea, the noise drowning out his lung sounds, and he shook so badly I feared he would collapse.

What had I done? I’d been so determined to fight through the impaction—had I ruptured his esophagus and delivered all of the fluids directly into his thoracic cavity? Or had it all gone into his trachea, effectively drowning him? Why hadn’t I sedated him more so that his head would hang lower?

I had Caroline walk him slowly around the field as I tried to gather my racing thoughts. But Easter only worsened, and soon it was obvious to both of us that there was nothing more to be done and I needed to put him out of his misery.

We agreed to load him onto my trailer and do it in there, then take him home for burial. Caroline sobbed as she apologized to Easter over and over, and I was so overwhelmed with shame for what I’d surely done to him that I could barely draw up the euthanasia solution.

Easter managed to load shakily into the trailer, but I realized that we hadn’t removed the divider, and we unloaded him, wrestled it out, then got him back in. Caroline was standing at his head tearfully murmuring to him, and I walked up, ready to deliver the fatal injection.

Miraculous Recovery: Back from the Brink

Easter looked at me and then pricked his ears. He nosed Caroline’s shoulder and nickered. His breathing came in wet, labored gasps, the fluid roaring in his chest, but his eyes were suddenly brighter, his stance steadier. I watched him for a moment unbelievingly, then walked to my truck and dropped the loaded syringes back into my tote.

We took him back to his original home with Caroline, but he refused all food and stood in the corner of his stall struggling to breathe, his nostrils flaring. I started antibiotics and anti-inflammatories and cursed myself for backing out of putting him down. I’d give him until morning, but that was it. I went home and had nightmares about ruptured gullets all night, while Caroline stayed up nursing him.

At 4 a.m. he began to nibble at his soaked feed. By 6 a.m. he was onto the wet chopped hay, and by 10 a.m. he was grazing on the meadow. The gurgle in his chest vanished. His vitals stabilized, and he acted like a young horse for the remainder of the day, frisking around the fence line and hollering to his buddies.

Each day, he’s gotten stronger and eaten more, and I’ve never been so happy about being completely wrong about a case in my career and having a horse undergo such a miraculous recovery.