“Hello, Dr. Diehl, this is Alan from Big Mountain Outfitters. I’ve got a sick mule!”

I could hear the tension in his voice, and I tried to reassure him. 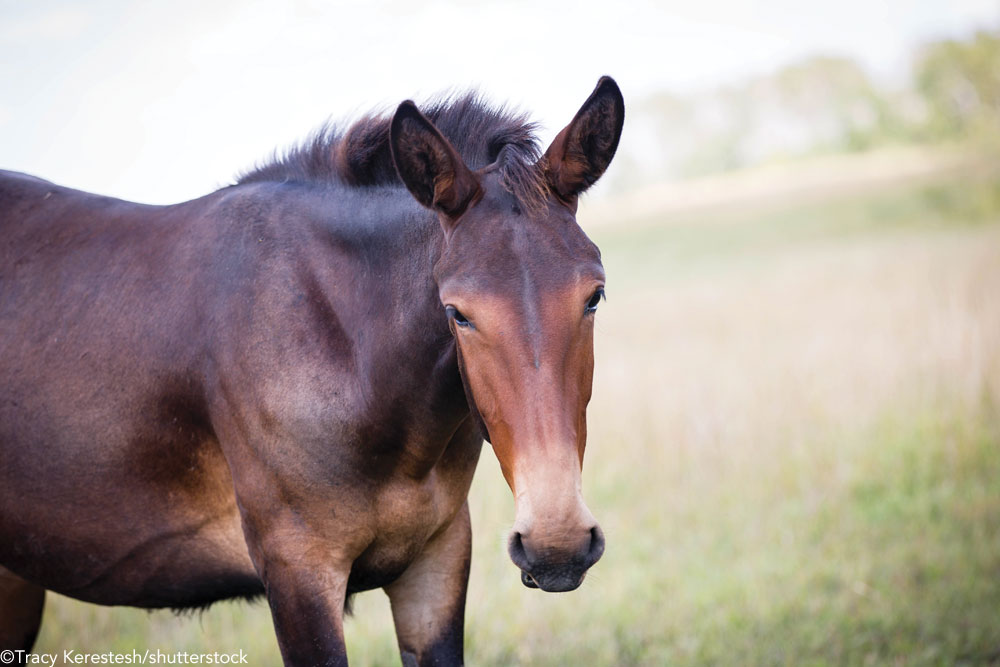 I groaned. Naomi was no mule. She was a puma/dragon/donkey hybrid, and she’d tried to kill me on several occasions. Just the sight of me was enough to send her into a rage, and more than once I’d dodged her large yellow teeth or a flying hoof aimed at my face.

The mention of Naomi’s name was enough to cause me to break out in a cold sweat. I’d mortally offended her once by drawing blood on her for a Coggins test, and she’d never forgotten it.

“Um, what seems to be wrong with her?” I asked, hoping I could provide some excellent vet tips over the phone.

Fantastic. Naomi would need a full exam, bloodwork and some shots. And I was going to die.

I had a few calls ahead of Naomi, and I hustled through them, the dread gnawing at my gut. I had a few wonderful moments where I was able to block out what lay in wait for me, but then it would come rushing back. This might just be my last day on earth.

All too soon, I was rolling up the long driveway that led to the outfitter’s base camp, multiple sets of long brown ears visible over the tall fence around the property. I pulled over to the barn and there was the dreaded mule, Naomi, tied to a rail.

I parked the truck and got out, trying to ignore the shaky feeling in the pit of my stomach. Naomi’s head hung low and she didn’t react as I approached her. Still, I kept a safe distance as Alan gave me more history. She’d been slower than usual on the trails, and over the last few days had gotten much worse, the cough steadily increasing in frequency. They’d noticed a thick discharge from her nostrils and she had quit eating this morning.

Naomi didn’t even lift her head, which simultaneously delighted and worried me. If she wasn’t trying to throw me to the ground and trample me, she must be at death’s door.

“OK, I’m going to examine her,” I said, sounding more confident than I felt. Alan untied Naomi and cupped her left eye so she’d focus on him and not me.

Trembling, I approached her thickly muscled torso and ran a hand gently over her shoulder. Naomi didn’t even lift her head, which simultaneously delighted and worried me. If she wasn’t trying to throw me to the ground and trample me, she must be at death’s door.

She allowed me to listen to her heart and lungs, the latter a horrifying cacophony of crackles, wheezes and squeaks accompanied by a wet gurgle of thick mucus. Daringly, I moved to her hind end and took her temperature. Still no reaction, but the temperature was 104 degrees F.

The Diagnosis of Naomi

“Alan, she’s got pneumonia,” I said. “And I need to draw some blood and give her some injections that will need to be repeated daily for a while. Do you think you can get the shots into her after today?” Alan looked doubtful.

This I knew, although funny was not the adjective I’d have selected. However, we were going to lose the mule if we didn’t get her on a powerful antibiotic regimen, and I doubted that orals alone would do it.

I drew up the first dose and marched over to her neck. Alan put a twitch on the mule’s upper lip and took hold of an ear. Bracing for the explosion, I slid the first needle through the skin and into her vein.

Nothing. Naomi didn’t flick an ear as I injected the dose and then drew 10 ml of her blood. I tipped her head up in the air and gave her more medicine by mouth and left several bottles with instructions for Alan.

“Doc, I’ve been getting her meds into her OK, but this morning I couldn’t quite manage.”

I drove out to the ranch, overconfident after my last interaction with Naomi, and I even felt a wave of affection towards her. Now that I’d successfully treated her, I doubted the sick mule would give me any more trouble.

But Naomi hadn’t gotten the memo and she was already staring at me, flinging her big head wickedly. Alan held up a hand.

“Let me get the hobbles on her first.”

Soon, Naomi’s front feet were hobbled, her lead rope snubbed so her nose was almost to her ankles. Alan tied up her near hind leg and put a twitch on her.

I grasped a fold of skin on her neck and slid the needle in; Naomi exploded violently. She wasn’t a sick mule anymore. I was thrown into a backward somersault, a hoofprint neatly marking my thigh, and my tote was scattered in the dirt. Alan was shouting as the chaos continued, but I’d crawled over to my truck and was watching the dust fly as my thigh began to throb.

Naomi had managed to kick me with her opposite hind foot. This would have required her to levitate, Matrix-style, rotate onto her right side, clobber me, rotate back to upright and come down to earth.

Naomi had managed to kick me with her opposite hind foot. This would have required her to levitate, Matrix-style, rotate onto her right side, clobber me, rotate back to upright and come down to earth.

As I was pondering this, Alan rubbed his chin, looked down at me with mild concern, then looked back at his gravity-defying mule, who was going to be on oral medication for the rest of her life. I waited expectantly for an expression of concern and maybe an offer of ice for my leg. After a few moments, he chuckled.

A Day at a Schooling Show