When I got my first look at the emaciated horse named Jack, a sorrel Quarter Horse gelding, I thought for sure I’d be putting him to sleep within the next several days. I generally try to exercise more tact than simply arriving, glancing at the patient, and announcing that euthanasia would be the kindest option, but poor Jack was in really tough shape. 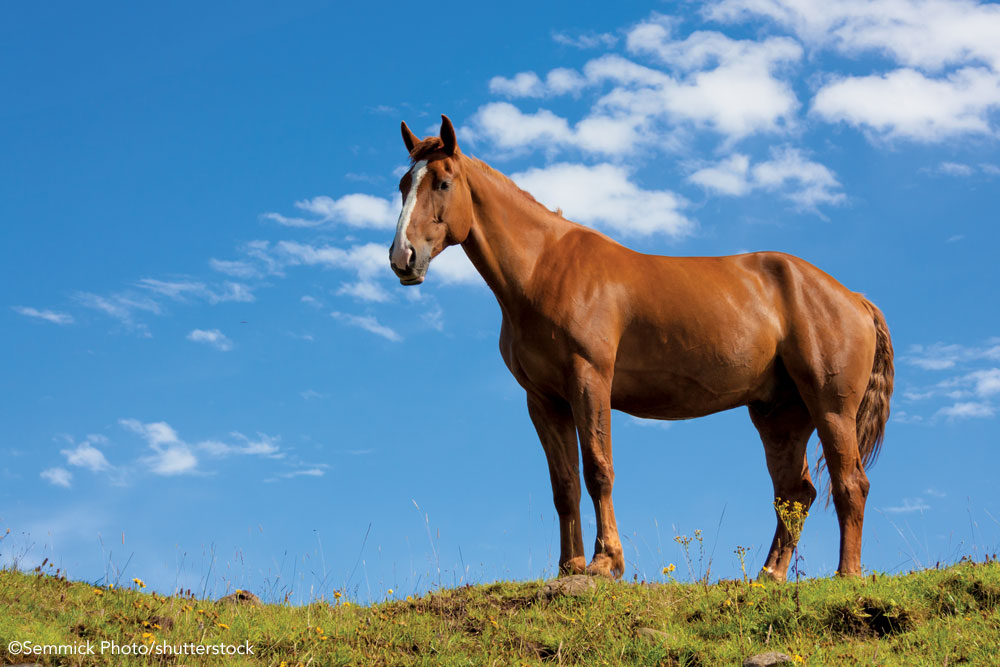 Two kind-hearted clients of mine had picked him up at a sale where he was languishing in a back pen, the mud and manure up to his ankles. The poor emaciated horse’s hip bones jutted prominently and his thin neck made his head look abnormally large. One ankle was swollen and hot to the touch, and his hooves were grossly overgrown. He limped slowly from the filthy pen at the request of Marcie and Michelle, who were there to buy a couple of saddle horses for their ranch. The sale hand spat in the dirt as he led the bedraggled horse over and said that he guessed the meat buyers had better take this one. That was enough for my clients, and they made a cash offer and bought him on the spot.

Examining the Damage of Diseased Teeth

They called me when they left the sale and requested that I meet them at the ranch. I got there as quickly as I could and looked with dismay at my patient huddled in the loafing shed, dwarfed by the brand-new blanket that Marcie had buckled over his emaciated frame.

His temperature was normal, but his heart rate was elevated, and a foul smell came from his mouth. I body scored him at a 2 on the Henneke scale (which ranges from 1 to 9), which I thought was generous. His distorted hooves cracked and split up the sides, the long toes almost curling off the ground.

His heart and lungs sounded fairly normal. I put gloves on and gently opened his mouth, estimating his age at about 15. His teeth were a horrifying mess of points, hooks and steps. There was a “wave” to his lower molars, which came to severe points in several places, and he was missing several incisors.

One overgrown upper molar was gouging savagely into his jaw, and another was wearing out the tooth opposite it. I had my work cut out for me in this mouth, but there was no way Jack could tolerate dental work yet.

Marcie and Michelle really wanted to try to save Jack, so I placed a catheter into his jugular vein and ran some fluids with dextrose and calcium at full speed. After about 10 liters had gone in, Jack was holding his head up. After another 10, he was investigating the hay in his feeder. I knew he’d be unable to eat the hay, so we soaked some alfalfa pellets and offered him about a pound of the mash.

Jack curled his lip at the wet mess, but soon discovered how tasty it was and slurped the entire ration down. Marcie wanted to give him more, but I explained that his gut needed very small amounts every few hours to avoid a condition known as refeeding syndrome, which can cause life-threatening electrolyte shifts when a starved horse is fed too many calories too quickly.

I pulled Jack’s loose hay; we would feed him very carefully over the next 10 days. He had free-choice water and a trace mineral salt block, and I started him on some antibiotics and pain medicine after he was rehydrated. The farrier was out within two hours to fix the awful feet, opening a large hoof abscess in the process. We finished by poulticing and bandaging the sore foot.

I was braced for Marcie and Michelle to call me to say that Jack was down, or colicking, or worse, but the daily updates were encouraging. At the two-week mark, I set up my dental equipment to tackle his awful teeth.

Jack was surprisingly feisty. I had to sedate him several times, but soon I was grinding down the severe points and correcting the wave mouth. I could see the diseased teeth moving back and forth as I worked, extracting three rotten molars easily. There were deep sores in his cheeks and jaw, but now that the worst of the problems were corrected, I knew Jack would heal quickly. I put him on a six-month dental schedule.

His improvement was rapid after the dental, and Marcie swore he was gaining 10 pounds a day. His coat grew shiny, and soon he was cantering around his pen, anxious to join the other horses. Michelle turned him out one sunny day, and within minutes he was grazing happily among the herd.

Marcie loved to watch for my truck, and she’d yell, “Look at Jack, Dr. Diehl! Not bad for a meat horse!” Then she’d pat Jack’s shining neck affectionately and say, “And to think Dr. Diehl thought we’d be putting you down!”

I’d just grin back at the happy pair. It was glorious to be wrong.

This article about a veterinarian’s experience with an emaciated horse with diseased teeth originally appeared in the January 2019 issue of Horse Illustrated magazine. Click here to subscribe!

April SmartTip of the Month Presented by SmartPak: Horse Behavior