As adults, vacation days are few and far between. Precious free time is used not only for traveling the world, but for accomplishing things we’ve dreamed of doing before it’s too late. One of my dreams has always been to be a barrel racer, with some of my fondest memories competing at local, unrated gymkhanas as a teenager. But I was never a real barrel racer, with real training.

College, jobs and graduate school put horses on the periphery for many years, but when I settled down, dreams of turning and burning returned. I didn’t have a barrel horse, but I called the National Barrel Horse Association hoping to find an instructor near me—no luck, there were none within an hour’s drive. Then, the idea occurred to me: If the barrel racing wouldn’t come to me, maybe I could go to the barrel racing! 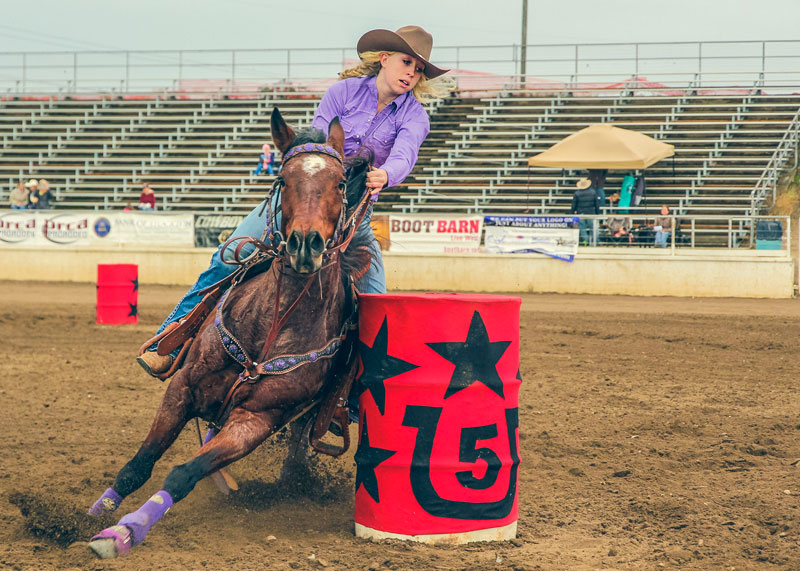 Martha Josey is a legend in the sport, with more trophy saddles and buckles won than anyone could ever use in a lifetime. She and her husband, world champion calf roper R.E. Josey, give nearly a dozen clinics a year at their 200-acre ranch in Karnack, Texas, and almost an equal number on the road. Why should I not train with the best?

Even though Josey clinics are designed to improve the horse and rider partnership, I was able to make special arrangements to borrow a horse.

“Have a relaxing time,” my mother said before I began the trip from Southern California to the Josey Ranch. I already knew the schedule would be too full for much relaxing, but little did I realize that “boot camp” would be a better description than “clinic” for this intense experience.

Camp started on a Friday afternoon with registration, followed by a welcome meeting. No time for dinner: Competition runs were on that night’s schedule, and I have to admit I was nervous. I blamed it on the fact that the horse I was going to ride didn’t arrive in time for me to actually get in a practice run. I tried to remember how many years it had been since I’d actually run a horse. The belt buckle I shined up for the event read 1989, but I hoped no one would look that close. I certainly am not as fearless as I was back then. A concussion I got while riding on trail when I was 20 taught me to always wear a helmet, even though that puts me in the minority as a barrel racer.

My borrowed mount was Lenny, a tall dark and handsome 6-year-old bay American Quarter Horse gelding that one of the instructors, Chris Martin, arranged for me to use. Chris said Lenny would lope the pattern if I checked him back in the alley, or he’d run it if I wanted him to.

Eighty-three barrel horses crowded into the main arena for a tack check, then circled the covered ring during warm-up. Lenny quietly trotted and loped on command, and was in every way a perfect gentleman. I couldn’t imagine him being too fast, but regardless I decided I would lope the pattern. After all, this was a horse I didn’t know, I hadn’t raced in probably 10 years, and I didn’t have anything to prove (or so I told myself).

When they opened the gate from the catch pen and called my name, it was the first time I’d ever seen a real alley or ridden at night under lights. But Lenny had things covered. The minute he set foot in that alleyway he woke up from his peaceful slumber and took off like a shot, pouring on that sprinter speed. I didn’t kick him, but I didn’t check him either.

“Whoa,” I called out as I reached the pocket. Lenny rated down a notch. As a kid, my ponies were not fast enough to require I hold on to the horn, but now I grabbed it with my outside hand. Lenny left the first barrel with more speed then I’d probably ever experienced, so even though I knew I should let go of the horn between barrels, I released it only long enough to switch hands. And I held that horn for the rest of the run.

I ran by the digital time display and heard the announcer say 19.060—not fast by Martha Josey standards, but fast enough to be second in my group and 13th out of 70+ riders that ran. I was beaming a smile completely beyond my control. I hadn’t smiled like that since my wedding, and before that, not since my Quarter Pony Spiffy carried me around the barrels fast enough to beat the handful of local competitors.

It was nearly 10 p.m. and 28 degrees out. Back in my hotel room, I gave my husband a quick call to tell him I was too tired to talk. I tried to defrost and quiet my mind enough to sleep for a few hours. We were scheduled to start at 8 a.m. the next day, which meant I needed to be there by 7:30 to get Lenny ready.

It was cold and clear, and I realized the nice western shirts I brought would stay buried under a jean jacket and a parka for most of the clinic. The locals assured me the cold snap was not the usual weather.

Cold or not, I was looking forward to the under-saddle instruction that filled our Saturday schedule. I felt both lucky to have such a good horse to ride and envious of the other riders, who had individual problems to work out and relationships to build with their horses once they left the clinic.

In an outdoor area surrounded by tall pine trees, we practiced funnel barrels first, weaving figure eights through the ever-widening funnel of barrels. Next up was pattern work, where cones marked for us where to rate and how far out to stay, and we practiced the important sequence of events—a sequence that must be practiced at slow speed until it becomes second nature because when you’re traveling full speed during a run, there’s no time to think.

We rated, and were sometimes instructed to stop or back up at the rate point, other times to break into a slower gait or slow down, always sinking into the saddle and saying “whoa.” As our inside leg reached the barrel, we practiced sliding our inside hand down the rein to bend our horses’ noses before holding on with our outside hand—behind the horn to push you back in the saddle, not in front, which pulls you forward. We were instructed to use our inside leg if our horse tried to come in, outside leg if he tried to bow out.

The inside of my knees was the first place to get sore from the intense work, followed by my foot, which a horse accidentally stepped on. During individual barrel work in the main ring each rider ran through the pattern several times in a row, as the instructors, each with microphone headsets, offered advice.

For the first time Lenny and I started knocking down barrels. Was I making Lenny worse? I wondered. It was only Saturday afternoon, but I was already beginning to worry about Sunday’s competition run. I guess some things never do change!

I put Lenny away at 8:45 p.m. after a long day in the saddle and headed for Taco Bell, the dinner of barrel champions. I had a much easier time falling asleep that night, as I was utterly exhausted. My inner thighs had joined the list of sore spots, and I slept soundly ’til my alarm blared at 6 a.m., 4 a.m. California time.

Bundled up against the cold, I got Lenny ready for a one-hour horsemanship clinic with Martha herself. Once again all 83 of us poured into one arena, where Martha, mounted on her new palomino stallion, and Chris instructed us on how to warm up a horse before a competition. From there my group had a brief 45-minute break before heading to the trophy room to watch the videos of our first runs in regular speed and slow motion. Mark Burt, a professional equestrian videographer pointed out what each of us needed to work on, from turning too soon, to hands too high and everything in between. I dreamed of doing it all perfectly in our upcoming final competition run, which was meant to showcase each rider’s improvement.

A saddle was up for grabs for the fastest time, and a woman familiar with Lenny said he could win it easily if I pushed him. Could I push him, or would I just end up knocking down barrels? I imagined carrying the saddle home on the plane and into the office Tuesday morning, “Yes, I won this saddle even though I hadn’t barrel raced in 10 years and only met my horse two days prior.” But the thought of trying to beat over 80 people made me incredibly nervous. We had one more session of barrel work that afternoon and then a pole bending class, but I didn’t have another chance to go fast around the barrels. To calm my nerves I told myself all I wanted to do was have a clear round and beat my previous time.

That afternoon we ran in descending time order, which meant I was one of the last riders to go. When I went to get Lenny ready, he didn’t want to leave his stall. Like me, he was probably tired and sore—my arms, shoulders and legs ached.

I listened as rider after rider improved their time, with many youngsters in the 17-second range. I let go of any thoughts of winning at that point and concentrated on my two goals.

Finally our turn came, and I took my jacket off for the big event. Lenny started in the alley with another burst of speed, but was on the wrong lead. I pulled up, and corrected the lead. We didn’t head out as fast to our first barrel as we had on Friday, but I tried to remember the steps and not turn too soon. We went wide on our first barrel, and on the way home I tried to encourage him with a “ssshhhh” sound I had used to hurry Spiffy along back in the day, but we still finished a second slower than we had on Friday.

Yet in the end I wasn’t disappointed. After all, most dreams can’t be fully achieved in a weekend, and if they could, they wouldn’t be worth striving toward all our lives. As I walked Lenny out I found myself smiling again—not a smile of elation but of accomplishment. I had taken a step toward my dream. I had survived barrel racing boot camp.

“Get Back on the Horse” and Other Pieces of Bad Advice