You’re in the alley ready for your barrel run, and your horse is just as excited as you are. But although you thought you were prepared, your horse starts slow from the alley, or he tips a barrel. Maybe he doesn’t listen to your outside aids. Despite your hopes and goals, you finish seconds slower than you wanted to. Where do you go from here? Champion barrel racer Lindsay Sears has some exercises and suggestions for problems that often plague barrel racers.

Often, barrel horses get so fired up to perform that they won’t rate around the barrel. A horse’s drive can overshadow his attention to his rider’s cues.
Whenever Sears has a horse that is acting up, she calls the vet out to evaluate the horse.

Once you confirm your horse is sound, Sears recommends going back to the basics with a hot horse. Work with him in the round pen, practicing changes within and between the gaits. You should be able to control your horse with your body and voice commands.

“From the ground, I can teach my horse to speed up and slow down with simple voice commands and body movements with the aid of a flag,” says Sears. “This seems so elementary, but it’s amazing how many horses are unable to do this simple exercise. If your horse doesn’t understand it at this level, it’s impossible for him to understand in the barrel pattern.”

“I am very adamant about these commands and that the horse understands there is a difference between the two commands,” says Sears.

When you can control your horse on the ground, mount up and follow these steps:

“I believe in repetition and consistency, so I do the exact same things at the walk, trot and gallop,” says Sears.

“When I approach a barrel, I always sit down approximately three strides before I reach my set point and say ‘easy.’ This allows my horse to start to gather himself up and slow down to be prepared for the set point when I say ‘whoa’ and bring him to a stop.”

Your set point should be about one stride from the barrel. Once your horse is stopped, ask him to take a small step backward in order to move his inside hip and leg up underneath himself. Then apply inside leg pressure and lift your inside rein to get him to bend in the ribcage and pick up his inside shoulder while keeping his hindquarters up and underneath himself. Then circle the barrel at a walk, maintaining an equal distance from it at all times. The barrel should be the center of your circle, and Sears recommends a 5 to 7 foot circle.

“If my horse shows any signs of anticipation, I will circle the barrel at a walk until he walks calmly and evenly around it,” says Sears.

Repeat this exercise multiple times until your horse truly masters the exercise at each barrel.

“I believe you can fix most problems by slowing down, going back to basics, and reminding yourself and your horse about the fundamentals of turning a barrel,” says Sears.

Don’t do this exercise at a fast gait until you have mastered it at the walk and jog.

“If you can’t do things slowly, then it’s going to be extremely difficult at a high rate of speed.” 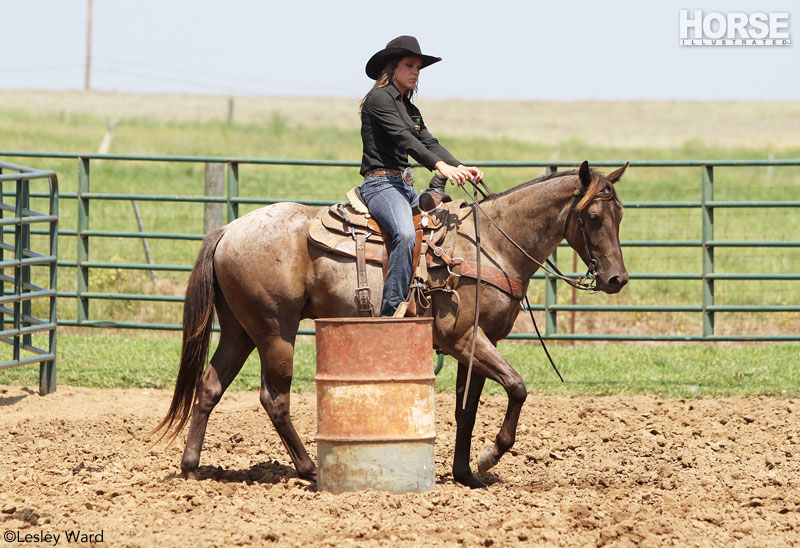 If your horse consistently leans in on the turns and constantly causes you to tip a barrel, teach him to collect himself before the barrel.

In an arena or pasture, walk your horse in a straight line. Pick up your right rein to tip your horse’s nose just slightly, and keep him moving forward. Then use your right leg to apply pressure to his ribcage.

“When I do this, I want my horse to move away from the pressure with his body and continue to move in a forward direction. This teaches the horse to move his body position but remain on the same line of direction,” says Sears.

When your horse can do this at the walk, jog and lope, you can go back to the barrel pattern. Combine this exercise with your inside rein and leg aids to help your horse move off the pressure and go around the barrel.

Sears believes that giving a bigger pocket doesn’t solve the problem. You have to collect your horse and ask him to work around the barrel.

Watch your body position as well. Sears often sees riders lean in or forward because their horse leans into the barrel. When this happens, the horse has to compensate for the weight of the rider and has to lean in even more. Make sure you sit down and square on your horse.

“It’s very difficult to have a good, tight barrel when you are out of position while approaching it,” says Sears. “Practicing perfectly promotes good habits for the horse and rider, which then results in good competition runs.”

Sears says one of the biggest problems barrel racers encounter is a horse that gets excessively stressed or nervous in the alley before a run. It’s very difficult to have a successful run if you don’t have a good approach to the first barrel.

If this sounds like your horse, first make sure he isn’t sore or injured. Then, evaluate your own feelings. Your nerves could cause your horse to be nervous. After that, consider whether another horse walking beside you in the alley might help to calm your horse.

“You have to determine the root of your horse’s nerves before you can fix the problem,” Sears says. “Learning to control your own emotions is a huge part of keeping your horse calm. I do a lot of visualization before I run. This keeps me calm, focused and concentrating on the task at hand.”

Sears also recommends taking your horse around the arena early, and letting him relax and settle in the arena and alley.

“If you run your horse every time you [go to a competition], he’s going to think that’s what you want to do,” says Sears. Go to a rodeo or barrel race, sit on your horse, and just let him relax.

“Horses need to know that they don’t have to make a run every time they go to the arena,” says Sears. “Being patient with your horse and taking the extra time and effort will result in a lot less headache for you in the long run.”

Meet the Expert: Champion barrel racer Lindsay Sears has won more than $1.5 million during her barrel racing career. Her list of achievements makes it clear that the work she does with her horses at home pays off at the rodeos. She is a two-time world champion, two-time reserve world champion, seven-time National Finals Rodeo qualifier, two-time Rodeo Houston Champion, Calgary Stampede Champion, and more.

Thanks to Kelly Murphy-Alley of Striking KMA Performance Horses, Wilmore, Kentucky, for demonstrating these exercises.