Any horse, anywhere, any time. It’s the perfect motto for the Extreme Cowboy Race, the brainchild of renowned colt-starter and clinician Craig Cameron, who wanted to offer equestrians of all ages and skill levels a well-rounded competition emphasizing proper horsemanship, camaraderie and a good time. What started out as “just a fun thing to do with your horse” has spread like a wildfire, says Cameron. Since the first race in 2005, awareness and interest in the event has grown, taking the Extreme Cowboy Race to international status.

Whether you ride an American Quarter Horse or an American Saddlebred, or wear cowboy boots or field boots, you can compete in the Extreme Cowboy Race. As long as you have an interest in honing your horsemanship skills and developing a deeper partnership with your horse, as well as a need for speed, consider yourself qualified.

The Extreme Cowboy Race consists of a series of obstacles that generally represent the tasks and challenges faced daily on a working ranch, such as crossing water or a bridge, dragging a log, carrying a tarp or bucket of water, et cetera. Don’t let the name scare you away. Cameron says the Extreme Cowboy Race is not as intense as its title implies.

“It’s all about good horsemanship and having fun, especially if you enter at the novice level,” says Cameron. “It’s a chance to go somewhere with your horse and meet people who are interested in the same thing you are; improve your horse and your horsemanship, make new friends, and have a great time.”

In addition to novice, there are non-pro and pro divisions, a youth division, and one for riders over 55. With participation in 14 regions across the United States and in Canada, you’ll find plenty of opportunities to compete.

Watch Talea Metivier and her Appaloosa stallion, Smart Little Sign, in their winning run at the Extreme Cowboy Race in Lynden, Wash. in 2013.


Pre-Race Prep
While you don’t need to have a million-dollar horse with advanced training, it’s important to have a good working relationship with your mount, and prepare for a race by practicing the necessary skills and the obstacles you’ll encounter.

“Like any training method, start slow,” says Cameron. “Get your horse broke. In other words, be able to walk, trot and lope him out. Then work on stops and rollbacks, because we do have performance moves, and then slowly present him to different obstacles, such as bridges, trailer loading, water crossing and being able to put your slicker on.

“All of these things you can practice slowly,” continues Cameron. “Gain your horse’s confidence and respect, and let him understand what it is that you’re doing and what you’re not doing. Everything we do in Extreme Racing makes for a more broke horse. If you can run the Extreme Race on your horse, I guarantee that you’ve got a nice horse.”

Cameron stresses the importance of a good foundation, which can be built by practicing forward-moving exercises with an emphasis on flexibility, position and control. It’s a message he strives to get across to the audience at his clinics, some of which are geared specifically toward teaching spectators and demonstration riders how to prepare themselves and their horse for an Extreme Cowboy Race, including building an obstacle course.

Cameron says regular trail riding is a good preparatory practice as well, and he strongly suggests hauling out your horse as often as you can. “We all know that our horse can seem phenomenal at home,” he says. “But the first time you take him someplace new, you would think he’d never been ridden a day in his life.”

Consistency and making sure your horse understands what you want are integral to developing a successful partnership for the Extreme Cowboy Race.

When you feel confident that you and your horse are ready to incorporate some of the obstacles you might encounter in a race into your training program, Cameron says you can easily construct them at home. The Extreme Cowboy Association rulebook is provided to all members and lists most of the obstacles you can expect to see at a race.

Before you enter an Extreme Cowboy Race, it’s a good idea to attend a few events as a spectator to get acquainted with the sport and become familiar with the rules and judging.

“Each obstacle is scored 1 through 10, with 10 being the highest,” explains Cameron. “We also use half points. It’s very rare that we give a 10. Seven, 7 1/2 and 8 are phenomenal scores. As long as [competitors] try, they at least get a point or a half point. If they miss an obstacle—like they forgot—that’s when it’s a zero. They also get a score on overall horsemanship and time.”

What It’s All About
The Extreme Cowboy Race has a reputation for being a western event. Although it began that way, it is open to any and all riders who have the skills and the horse to compete. While the rules call for a long-sleeve shirt and a cowboy hat (or certified helmet) as part of tradition, you don’t need a stock horse breed. Your saddle can have leg flaps instead of fenders, and you can ride with a single rein or split reins.

“We’ve had riders come in with all different types of horses, and even English riders,” says Cameron. “They don’t have to have a horn on their saddle, but sometimes you have to drag logs, so they would have to adapt to that.”

The focus of Extreme Cowboy Racing is not on the type of horse or tack you show up with. When proper training and schooling come together to create a successful equine competitor, you possess what Cameron calls “the brave horse”—one that is willing and knows his job.

“This horse works with his heart and isn’t working out of fear,” explains Cameron. “He goes through the course very bravely. Nothing is more beautiful than that, and when I commentate, those are things I want to see and point out to people in a fun way—what I call ‘color commentary’—to make it a great spectator sport.” Upbeat music played during each performance adds appeal to this fast-paced event.

An important part of Cameron’s commentary of each competitor’s run is getting the audience involved in order to further educate them about proper horsemanship and riding.

“Every great sport has commentary, whether it’s horse racing, baseball or football,” says Cameron. “When I do commentary, people come up and say, ‘I learned so much just by watching and listening to your comments about how [a rider] had a tight rein, or they were leaning, or they did a great job on a lead change.’

“So doing things like having them say ‘Olé’ when the horse changes leads helps people become aware of what a lead change is, and it makes them a little more knowledgeable about horses and horsemanship,” adds Cameron.

The Future of the Race
Although the Extreme Cowboy Race is presented to sold-out crowds across the country, including at some of the largest equine expositions such as Equine Affaire, Cameron says that like any large event, there’s always room for growth.

“You’re always working on making it better and adding new things,” he explains. “We’re always tweaking the rulebook as we come up against things we realize we didn’t address or make clear enough.”

Cameron feels that the Extreme Cowboy Race is one of the fastest-growing equestrian sports and hopes that it will continue to grow, attract more competitors and spectators, and become a legacy for him. He encourages anyone who’s interested to give it a try.

Senior Associate Editor Kim Abbott Klimek is a dressage rider who enjoys the challenge of learning a new equestrian sport. In addition to vaulting, polo, saddle seat and reining, she hopes to someday add the Extreme Cowboy Race to her résumé. 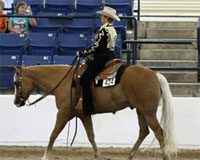