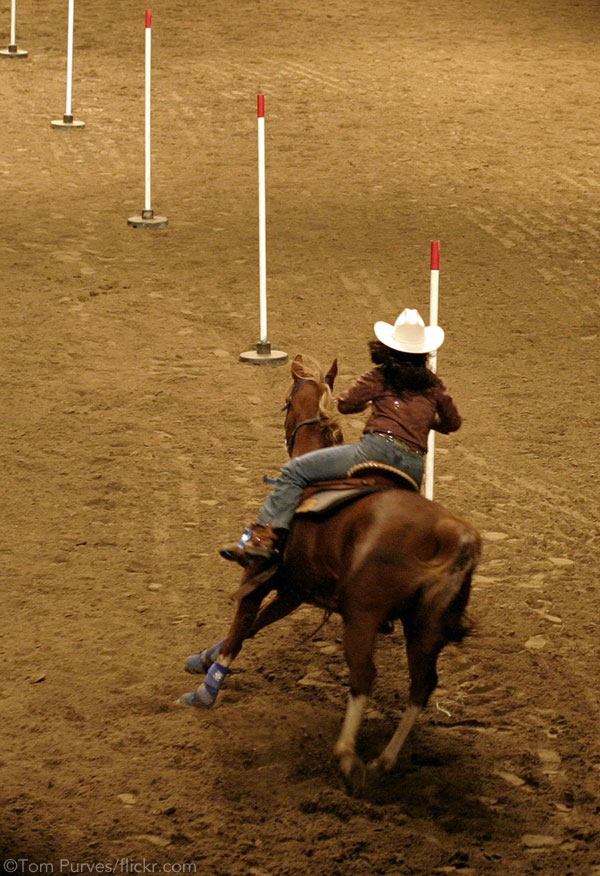 If the speed and precision of pole bending has ever called to you, it’s time to give it a whirl. This fun, fast sport requires many of the foundation skills that will help your horse succeed in all his pursuits, and pole bending is a great way to start your future barrel horse.

“My horses start on the poles and then go to the barrels,” says Doug Leasor of Leasor Quarter Horses in Holland, Mass. He finds pole bending more challenging than barrel racing. “There are six poles versus three barrels, and you go past each one of them twice. You’ve got 12 variables versus three.”

Leasor says a horse should have all the fundamentals in place before ever getting sight of the poles.

“I like my horses to work off my leg a little more than most people,” he says. “My theory is that the more you get into a horse’s mouth, the harder his mouth is going to be. The more I can do with leg pressure, the longer his mouth will last. I ride my horses in an O-ring snaffle or something similar.

“They have to pick up their leads, walk, trot, lope and stop,” Leasor continues. “When I’m exercising my horses, part of my training regimen is that when I ask my horse to stop, I want him to respond. If I’m loping circles and I ask him to stop, I never walk him forward after the stop. I let him stand there, and if I’m going to ride off, I’ll ride off to the left or right. I’ll never ride off forward.” This reinforces obedience and waiting for rider instruction.

Setting up the Pole Pattern

The pole bending pattern consists of six 6-foot-tall poles, each with a base no more than 14 inches wide. The first pole is set 21 feet from the starting line, and each pole thereafter is spaced 21 feet apart. The horse can start on the left- or right-hand side of the poles and will then run straight down, turn the end pole, weave through the poles, turn around the final pole and weave back. When the horse turns around the end pole, he will then run straight down the opposite side from where he started.

When a horse is solid in his basics, Leasor introduces the pattern at a walk.

“I’ll bring the horse in and set him in front of the poles at the end of the arena so that he sees what he’s going to do,” says Leasor. He feels this is an important preparatory step, adding that he does not advise people running into the ring to start the pattern, even at a competition, as it doesn’t give the horse the opportunity to see what he’s about to do. “I start the pattern at a walk, then I start it at a trot, and then I’ll go into the lope. I don’t do a lot of the run down and run back. I focus mainly on the weaving.”

Leasor explains the rider mechanics during a pattern. “When you get to the fifth pole, you bump [gently pull the reins] to collect him. If your horse is running wide open and you get to the end and haul him around, then he’s going to be all strung out.

“If you’re going down the right-hand side of the poles, when his shoulder gets to that sixth pole, you lift the inside (left) rein and you take your left leg and put it into his ribcage to start the bend. As you get three-quarters of the way around the pole, you release your leg, drop your inside rein, and pick up the outside (right) rein, and push his shoulder over with your right leg. That gets him on the opposite side of the centerline of the poles. Then, when his shoulder gets to the fifth pole, you pick up on the outside (left) rein, and take your left leg and push the horse over.”

This continues until you reach the opposite end to make the turn and head back up through the six poles, using the leg and hand cues as described.

Think of stepping your horse over through the pattern, says Leasor. “You don’t [steer him in] a zig-zag pattern. If your horse is 8 feet long, you have to get 8 feet across the centerline before you can come back the other way. If you stand your horse up and push him side to side, he’s only 3 ½ feet wide, so you’re covering less ground. Your horse has to stand up and move side to side rather than zig-zagging through the pattern.”

Your body position will be more or less up upright; however, Leasor says that some of his horses turn so tightly that he has to drop his shoulders around the poles to stay out of the way.

The Need for Speed

Leasor doesn’t worry about how fast his horses are running up or down the sides of the pattern when he’s training them. He says running comes naturally to horses, given time. “They will figure that out on their own,” he explains. “You have to teach them to handle and to turn. Most people put a run in them too fast. I [work on] turning. I give them the opportunity to go faster, but I don’t push them to go faster. One day a light will go on in the horse’s head that he can do it faster, and he will.”

Leasor explains that it’s easier to start a horse on poles than barrels because a barrel horse will have too much run to begin with. “If you work on the pole pattern, you’re always into the horse; every 21 feet you’re making him do something,” he says.”He’s more responsive than a barrel horse would be.”

How much Leasor works on the pattern during training depends on the horse’s mindset. “We may work the pattern today 20 to 30 minutes on and off. You can’t keep their attention span that long, so you ride them through the pattern, then work on something else, and then come back [to the pattern] again.”

However, once a horse is performing the pole pattern perfectly at home and is ready for competition, Leasor no longer drills it at home.

Rather than overdoing the pattern, Leasor works on exercises that reinforce the fundamentals. “We do a lot of loping circles, stopping, and rolling over to the outside. If you’re loping circles clockwise, for example, you stop your horse and roll back to the outside and then lope off again. It keeps your horse collected and keeps him using his back end a lot.

“I do a lot of bending and moving the horse over with my legs to the inside and outside,” he adds.

Perfect practice will pay off at competitions, Leasor explains. The pole bending pattern is all about rhythm, and if you don’t set your horse up correctly, he’s likely to experience problems throughout the run.

“The poles are the same distance everywhere you go, unlike a barrel pattern,” Leasor explains. “Horses get into a set rhythm [through the poles]. When they turn that end pole, if they turn late, they’ll lose the rhythm and often hit the third pole up. When you’re running a fast pattern, you don’t have time to move your horse and correct him. You have to get your horse in the same spot every single time.

“Practice doesn’t make perfect, perfect practice makes perfect,” he continues. This includes rating your horse for the first turn the same way and at the same time every time you practice, whether you’re walking, trotting or loping.

“I see a lot of horses that start anticipating [the turns rather than waiting for the rider’s cues] through the weave,” says Leasor. He suggests skipping some poles at random to solve this problem. “If a horse is having trouble and diving in on the pole, I’ll run him down and we’ll turn the fourth pole, weave back up two and then weave back down three, et cetera. Make the horse wait on you.”

The No. 1 tip for success is to make sure your horse has an aptitude for pole bending. Just like people, some horses are more suited to certain sports than others.

“You can tell if they like what they’re doing,” Leasor says. Sure, a horse may have an off day, but if he isn’t suited to or interested in pole bending, it will show in his performance.

Assuming you have a horse who is interested in the sport, Leasor says the next tip for success is to put in the hours and perfect practice time. “If you don’t work at it, you’re not going to succeed at it,” he explains.”Michael Jordan wouldn’t have been Michael Jordan if he sat on the couch all week long and then went and played basketball Sunday afternoon.”

Whether you’re using pole bending practice to mix up your routine, to start your future barrel horse or to compete in pole bending competitions, the thrill and precision of the pattern is sure to challenge you both and improve your communication.

For more information on the sport, visit the National Pole Bending Association at www.polebending.org.

Liked this article? Here are others on speed events:
Better Pole Bending
Getting Your Horse Through the In-Gate

Micaela Myers is the author of The Horse Illustrated Guide to Trail Riding and KNACK Leg and Hoof Care for Horses. 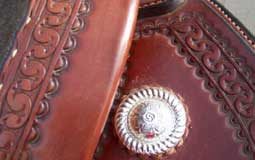 Latigo Strings: Tie One On