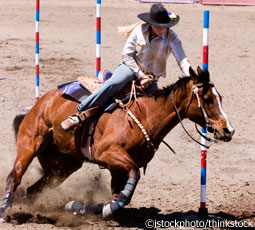 Aside from barrel racing, pole bending is the most popular speed event in America. Throughout show season, at local competitions, gymkhanas and breed shows, you’ll find the top riders dashing through a set of six poles so fast it’s hard to tell they’re weaving. But this skill doesn’t come easily—it takes the right horse, rider, practice and training. Here, American Paint Horse Association 2004 Open Pole Bending Champion Kim Zeamer of Quarryville, Pa., and her trainers Terry and Peg Helder of Wrightsville, Pa., share their knowledge to help you achieve a winning run.

The Fun of the Run
Kim, now 28, met her current trainers Terry and Peg when she was 9. However, she didn’t discover pole bending until she was in her early 20s and began showing A Splash of Hobby or “Niki,” an American Paint Horse who was only 14.1 hands and “did not fit into the current trends of the pleasure industry,” as Kim explains. After competing in equitation, horsemanship, trail and reining classes to give the mare a solid foundation, Kim decided to try pole bending. Pole bending soon became Niki and Kim’s specialty, and a year later they went on to win the World Championship in Novice Amateur Pole Bending, and Reserve World Champion in Open Pole Bending and Amateur Pole Bending at the 1999 APHA World Show.

“I enjoy pole bending because it is so challenging—to negotiate 12 turns of perfection is an adrenaline rush,” Kim says. “Your horse has to be listening 100 percent, because all it takes is one wrong step and you find a knocked down pole. The pattern itself is also a challenge as a rider; the motion of the horse can make it so easy to go off balance or lose a stirrup, or any of the other things that can go wrong. I actually had a rein flip over Niki’s head at the World Show when we came around the last end pole, so I had to run her full speed at the chute with the reins on one side of her neck. Talk about an adrenaline rush! But those are the instances where you need to have your horse be your partner and know you can trust him.”

Kim won the 2004 title on another one of her American Paint Horses, a junior horse named Designed in Lace, affectionately called “Desiree.”

The Right Horse
Terry and Peg Helder of Evergreen Farm specialize in Paint Horses and have been training all-around horses for 30 years. They show at regional and national Paint shows, National Barrel Horse Association shows and reining shows, and have a long list of World, national, versatility, youth, open, Congress and futurity wins to their credit.

When sizing up a pole bending prospect, Peg looks for an agile horse with a good shoulder for sweeping through the poles easily. “The hocks should be close to the ground, so the horse can make quick turns on the ends. We also look for a horse that is smooth muscled; the ones that are heavily muscled have a little more trouble getting through the pattern with ease. One of the most important attributes is heart—they can have less physical ability but still get a lot done if they are willing individuals.”

Mistakes to Avoid
Terry, Peg and Kim have witnessed, and no doubt experienced, their fair share of mistakes. Often, in the heat of a run, riders are not even aware of what they’re doing wrong, just that their times are slower than they’d like. Here are some common mistakes to avoid. Think about them when you’re riding, and perhaps have a friend video your runs to see if you’re encountering any of these trouble spots.

“One of the most common mistakes is not having your horse supple enough and not responding to leg pressure,” Peg says.

Kim agrees, “So often I see people running arcs either to the first pole or coming home. Straight lines are a big time reducer. Geometry will tell you that it’s faster to run a straight line then a wide arc.”

Turning the end poles is another common area for costly mistakes. There are two standard ways to run a pole pattern—straight poles, where you begin weaving the first pole you pass, weave up, turn the final pole and weave back; or Quarter Horse poles, where you run beside the poles, turn the sixth pole, weave down, turn the bottom pole and weave back up, finishing by running down the opposite side of the poles and straight home (see diagram, right). Most stock horse shows use the Quarter Horse pole pattern as Kim does. “I consider the first end pole the ‘make it or break it’ pole,” she says. “If you can get your horse to run full speed and come around the end pole quickly and begin the pattern, you tend to get the rhythm you need for a great pattern. Any bobbles or wide turns on the end pole often mean a choppy pattern or penalties. It’s hard to get the strides between the rest of the pattern if you are off on the first turn.”

“High hands are also a big problem,” Peg says. “You will lose control of your horse’s shoulders with hands that are too high.” Your hands should stay below your belly button, and Peg recommends using a ground person to remind you when they creep too high.

Practice Makes Perfect
Kim, Terry and Peg share their advice and favorite exercises to help you achieve a successful pole bending partnership, with a horse that’s responsive to your leg and doesn’t waste time on wide arcs or loops.

Reverse Arcs
Practicing reverse arcs will help loosen up the horse’s shoulder. “To do a reverse arc, make a circle, and instead of having the horse bending to the inside, tilt his head to the outside of the circle, and push his shoulders slightly to the inside with your outside leg,” Peg says. Smaller circles are more difficult, so start with medium-sized circles, approximately 60 feet, at the walk, and perform them for only short periods of time. When the horse can do this with no resistance, move to a smaller circle, approximately 30 feet, but never so small that he loses his forward motion. “Move up to the next gait when it becomes a relaxed maneuver at the previous gait. Don’t expect immediate results—these exercises take time to be performed correctly by horse as well as rider,” Peg says.

Leg Yields
“Leg yields can also help make the horse more responsive to leg pressure,” Peg says. “Going diagonally across the arena from left to right for example, tilt the horse’s nose slightly to the left and push with your left leg to move right.” Close the outside rein as if you were making a fist to help keep the horse straight. At first just go a short distance, then let the horse move straight before asking again. As with the reverse arc, leg yields should be performed at the walk until the horse has mastered the maneuver. Peg cautions that leg yields become particularly difficult at the canter. “If the horse is not relaxed at the gait you are doing, you may have to go back to a slower gait to make it correct before moving up. His feet should be crossing over front and back, resembling a sidepass but moving forward.” Once your horse can leg yield at all gaits, his pole pattern will be much smoother because he’ll move quickly and easily away from your leg pressure.

Good Equitation
Good equitation is essential to a winning run. “Staying over the center of the horse is very important to keep both of you balanced,” Peg says. Avoid leaning forward, as it makes it harder for your horse to stay balanced and is dangerous for both of you if he trips. Keeping your legs under you in proper position is also important for cueing the horse correctly and keeping him off the poles.

Peg adds that Kim’s early showing experience in pleasure, equitation and hunter under saddle helped her become a correct rider.

Going Light on the Patterns
You’re unlikely to make a winning pole horse by practicing the patterns over and over. “I don’t overwork my horses on the pattern, especially once they are comfortable with it,” Kim says. “In the beginning of a horse’s training, we often walk and jog the pattern a lot before increasing speed. Practice until your horse is comfortable and understands his job.” Once this is accomplished, you can back off the pattern work and instead focus on basic elements such as leg yields.

Peg says not overworking the patterns has been especially important with Kim’s new horse Desiree. “It takes a lot of work to keep her quiet—a lot of circles, leg yields, slow patterns and trail riding. Kim does very little running of fast patterns at home with this horse, and that is what helps keep her from getting sour.”

Mind Power
Pole bending is an intense event, and it can be difficult for horse and rider to stay focused and avoid getting overly excited or stressed. “Probably the biggest challenge is mental,” Kim says. “Everyone, of course, always wants a clean run, but that doesn’t happen. So you can’t get too hard on yourself if you have a bad pattern. The biggest thing for me is knowing that people expect me to perform perfectly after having won five World titles. But horses have their own minds, and, just like people, they are never perfect.”

For safety and enjoyment, the horse’s mental outlook at a show is also extremely important. Anyone who’s watched speed events has witnessed the horse that’s so excited he can’t keep his feet on the ground. “It is very important to have your horse under control and listening,” Peg says. “If he’s not listening outside before running, he can’t be expected to listen inside during competition.”

To avoid a dangerous in-gate situation, Peg practices the following with each of her speed horses. “We walk up to the gate and stand quietly in between runs.” In addition, when it’s time for a run, Peg and Terry expect their horses to turn around and roll back into the pattern. “By running a horse straight into the ring all the time, it becomes increasingly difficult to stay under control,” Peg says.

“The main thing in my mind is to be a partner to your horse,” Kim says. “I think the most successful riders are those who are a true team with their horses. Spend time with him on and off the ground and establish a relationship. You are trusting this animal with your safety when you are running full speed, and you want good communication.”

Micaela Myers enjoyed running poles as a youth with her Quarter Ponies and is now a freelance writer in California.