Think pivots are just fancy reining maneuvers too difficult for the likes of you? Think again. Picture yourself trail riding along a new path, hemmed in on one side by prickly bushes and a sharp drop on the other. The trail isn’t wide enough to reverse by walking a circle. So what do you do if you hit a dead end or your riding partner needs help behind you? You can try backing your horse the whole way and hope he stays straight — or you can just turn 10 degrees in place: a half pivot. 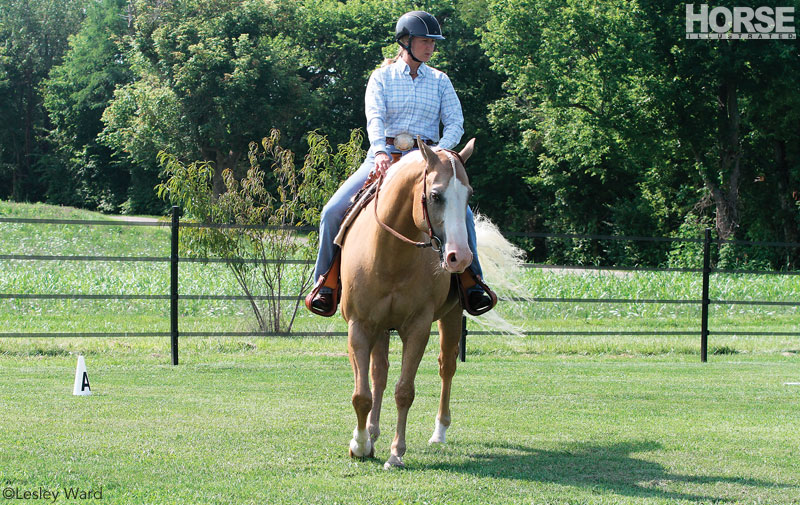 Or maybe you do want to try some arena classes like reining western riding and horsemanship, but those 360-degree spins look intimidating. Don’t let that keep you away. You can get any horse that understands the basics of neck reining and leg yielding to pivot, even if he has never done it before — once you know what doors to open and which to close.

To help you learn these doors, whether you want a more flexible trail horse or a shot at the blue ribbon, we asked multiple world champion Charlie Cole to explain his system for producing flawless pivots. He demonstrates the technique on one of the Quarter Horses in his training barn, Classy Hobby Doc, who won the reserve horsemanship title at the 1997 All-American Quarter Horse Congress as well as AQHA World Show titles in trail and western riding.

In order to perform this maneuver, your horse does need to know how to yield to neck-rein and leg-yield cues. If he doesn’t, you’ll want to work on those before tackling the pivot.

Charlie recommends you outfit your horse in a snaffle bit until he’s learned the lesson, and you’ll use two hands. Once he’s mastered the pivot, you’ll bring your hands gradually closer until you can hold the reins in one hand. (Your basic hand position will remain the same.)

Your horse should start out standing straight, with his tail, back and poll aligned. Your elbows should be at your hips and will remain there even while cueing. Your hands should be just in front of the pommel about horn level with even rein pressure. The amount of slack you’ll have will depend on your horse and may need to be adjusted as you do the pivot to keep your horse in place. You should be sitting evenly in the saddle, with the weight down in your heels and your shoulders and hips as square as possible.

To begin a pivot to the right, your left hand will move to the right, bringing the left rein against your horse’s neck, to tip his nose to the inside of the turn. (Your hand should not move backward, which would tilt his nose to the left.) Simultaneously, you’ll apply pressure with your left leg at the girth. Be sure to keep your inside (right) leg off his body so you don’t block his movement in that direction.

These cues combined should encourage him to push his front left leg across the right leg and take the first step into the pivot. If he does, be sure to reward him with a pat or word so he understands this is the correct response.

If your horse surprises you by performing an entire pivot at these cues, instead of a single step, don’t continue to apply constant leg pressure, which will cause him to build up speed: Just tap him with your leg at the girth to maintain his cadence as he turns. If, on the other hand, he takes only a single pivot step, simply continue to apply the cues to complete a 360-degree turn. A proper pivot should feel smooth and even as your horse’s legs reach around and cross over; his inside hind leg should remain planted on the ground throughout the whole turn, his body should stay slightly arced and his head should remain tipped in.

If you find yourself in a dream and your “untrained” horse is maintaining a nice cadenced pivot on a planted inside leg and crossing front legs, just keep your leg off him, and don’t pinch yourself. Enjoy the ride!

If, however, you find yourself waking up and your horse has missed the mark, don’t be discouraged. Chances are, if he’s never done it before and you haven’t either, your first few tries won’t be any better than your first attempt at parking your new dually in the economy-car parking lot. Your horse may be confused and try to step forward or backward, do a sidepass, move too quickly or too slowly. You’ll need to experiment and develop a feel for how much leg and rein pressure you’ll need in order to accomplish a perfect pivot.

Just go back and try again, paying close attention to your own position and cues throughout. Read the following list for common problems and their fixes, and run through it in your mind as you’re sitting in the saddle.

Generally speaking, rider error is the cause of most pivot problems. You may think you’re cueing properly and clearly but actually be unintentionally sending out the wrong signals.

Here’s a rundown of common problems, why they occur and what to do to fix them.

Problem: Instead of moving sideways in a spin, your horse straightens his head or turns his head to the outside and steps forward in a straight or curved line.

Cause: You’re either not using enough rein on this horse, or you’ve brought your hand too far over, across the horse’s neck, so it has reversed the cues.

Fix: Keep your outside hand from crossing over the horse’s neck to the opposite side when you lay the rein against it. If he’s not tipping his head in when you touch him with the outside rein, bump him with the inside rein (pick up the slack by lifting it straight up, not back) then return it to its position even with your left hand, and make sure the outside rein is laying against his neck to encourage more arc. Repeat if necessary, but return to position each time.

Problem: He’s rocked back too far on his haunches or even takes a step backward.

Cause: You’re using too much rein.

Fix: Soften the rein pressure and tap him up with your leg at the girth to make him rock forward then step around.

Problem: He’s bending too far into the arc.

Cause: He’s paving attention to your reins but not listening as well to your legs.

Fix: Bump his shoulder over.

Problem: Your horse is “cheating,” sidestepping with his front legs instead of crossing his outside over his inside leg. You can tell because you’ll hear his front legs hit, his head pops up as he does it and the turn will feel rough.

Cause: You might be using too much rein, not enough leg or possibly have uneven weight in the saddle.

Fix: To avoid this, you’ll need to make him step up a bit, so you’ll release your hands. If softening the reins causes him to step forward out of the pivot, pop him on the outside shoulder with your left leg so he’ll move over instead of ahead. Keep yourself balanced by keeping your weight as centered as possible. You might step into the inside stirrup a bit more to battle centrifugal force.

Problem: He swaps ends &$151; taking a step with the hind leg that should have stayed planted throughout the pivot. It’ll feel like he’s backing and popping his hind end.

Fix: Again, soften your reins and encourage his sideways motion.

Cause: His body isn’t arced enough to make him realize he should be turning in place, so he’s interpreting the cues as a command to move sideways in line.

Fix: Take up more rein to emphasize the arc in his body more, and drop your outside leg forward to bump his shoulder.

Cause: It’s a new maneuver for him and he may still be a little unsure that this is what you want. Or he might be a bit stiff or even just lazy.

Fix: Slow is fine, especially for anything new. Make sure he thoroughly understands the cues and maneuver and can maintain a consistent, cadenced rhythm before you ask for any sort of speed. Once you’re sure he’s got the pivot down pat and you’ve warmed him up out of any stiffness, if you want to increase his sluggish speed, just tap with your leg at the girth. Increase the aid or add a slap with the ends of your reins, if necessary.

Problem: Your horse thinks he’s a spinning top and races through the turn as if pursued by demons.

Cause: Whoa! Ease up on the pressure. You’ve got a sensitive, possibly nervous and excitable guy and won’t need to worry about building up speed. For now, you want to take it slow and easy so take up a little slack and ask a bit more politely with that leg of yours (as in less pressure when you cue) until he’s listening and responding with a calm and cadenced maneuver.

If you try these fixes and still don’t seem to be able to pivot our horse, ask a trainer or more experienced rider for help. They can watch you ride and determine if you’re doing something you’re not aware of. They can also ride your horse for you and attempt to pivot. If they aren’t able to pivot either, your horse may be experiencing some pain or physical problem that prevents him. However, the most likely reason is a communication failure between horse and rider.

The pivot can be a fun maneuver for you and your horse and can even be exciting when done at faster speeds. And it can be useful on trail as well. But more importantly, learning the pivot is a way to enhance the communication between you and your horse and increase your horsemanship skills. With patience and practice, you’ll soon be spinning with the best of them.

Charlie Cole and his partner, trainer Jason Martin, run their training barn High Point Performance Horses out of Chino Hills, Calif. With the world titles the team has been racking up over the last several years, they’ve made quite a name for themselves — and their students.