Home Riding and Training Western Riding Show Your Stuff: A Guide to Showmanship 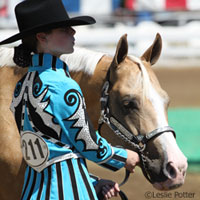 Showmanship competition reflects how a well-trained horse should behave on the ground. Every horse should be easy to handle, work effortlessly off his handler’s cues, allow others to approach and move around him without concern, and stand still when asked. Having a horse that willingly moves his feet and walks and jogs in-hand makes visits from the farrier and veterinarian a breeze.

Practicality aside, showmanship is fun! It’s an opportunity for non-riders, and those who aren’t quite ready to show under saddle, to compete with their horse. It’s also useful for earning points toward overall and versatility awards. Whatever reason you’ve decided to give showmanship a try, don’t be fooled into thinking it’s an easy class. Like any other competition, it takes preparation, practice and skill.

The best way to be successful at showmanship is to understand how it’s judged. In contrast to a halter class, in which a horse’s conformation is evaluated, the handler’s skills as a showman are being scrutinized. However, the horse’s appearance and training are significant to the overall score as well.

The Prerequisites
Even though your horse isn’t being judged directly, you do need him to perform well so you can be a competitive team. That means he has to have all the right moves. There are several maneuvers you can expect to see whenever you compete in showmanship. These include squaring up, pivoting to the right, being led at the walk and jog on a straight line, backing up, and upward and downward transitions between the jog, walk and halt. While you’ll find variations of these core movements within each pattern, they will give you the foundation you need to meet any challenge head on.

While you can use your leadline to ask your horse to perform the required movements, the ultimate goal is for him to fluidly respond to changes in your body position. That will give your performance the desired appearance of a well-choreographed dance. It also demonstrates a higher level of difficulty to the judge, which earns you higher points on your overall score. (It’s also important to know that you can’t touch your horse at any time in the show pen.)

Before you get started on mastering these skills, outfit your horse in a flat halter and a stud chain. Run the chain through the left noseband ring and pass it under his chin. Then run it out through the right noseband ring and clip it to the upper ring on the crownpiece. The chain is used to enhance communication with your horse, not to punish him. Use the chain under your horse’s chin only when you are working him in showmanship so he’ll learn to focus on his job. Then he’ll know the difference between work and being casually led around the barn.

The Right Moves
The secret to developing a responsive showmanship horse is consistency, patience and a lot of practice. Use the same cues every time you ask your horse to perform these maneuvers. Make corrections as necessary to help him learn what you want, but also offer praise when he tries for you or executes a maneuver correctly. Follow these steps to ensure success.

1. Stop: From the walk or the jog, pull your shoulders back slightly and drop your hips, then hit the brakes with your feet. In the beginning, you may need to reinforce this visual signal with steady pressure on the lead shank at the same time. If your horse still doesn’t respond, turn around and face him, and then ask him to back a few steps to emphasize the stop cue.

2. Square-up: After asking for the stop, turn toward your horse. Stand with your feet together and your toes pointed toward his left front foot. Focus your eyes on the hoof you want to move, and set up a predictable pattern that your horse can count on. For example, place his right hind foot, then the left hind, right fore and left fore. Use your leadline to first tell your horse to focus on his hind end or forehand, and then which foot to move and where. Lift your lead hand (always your right hand) slightly and apply pressure by angling your hand toward your horse’s hip to move his hind legs: Tip his head slightly to the right to lighten and move his left hind leg, and tip his head slightly toward you to move his right hind leg. Increase the rearward pressure to move a foot farther back, and forward pressure to bring it forward. Decrease the pressure as your horse’s foot closes in on the correct position, and release it completely when he puts it where you want it.

To manipulate your horse’s front feet, apply pressure on the leadline toward the ground. Tip his head away from the leg you want to move, pushing forward or back until you achieve the correct position. While he’s learning, you can also use the toe of your boot to touch your horse’s pastern if he needs help figuring out which foot to move. Just remember that you can only use the lead to position your horse during competition.

3. Walk: When you turn and face forward, that’s your horse’s cue to walk off. Wait for him to step forward before you do, so you’re moving off together.

4. Jog: Pre-cue your horse for the transition to the jog by inclining your upper body forward slightly, and then pick up the jog. If he lags behind, push your lead hand forward and apply pressure to the leadline until he changes gait.

5. Pivot: Face the left side of your horse’s head, with your shoulders parallel to his body. Step toward him to signal him to move his shoulders away from you and start pivoting. If he doesn’t move, resist the urge to push on his head; that will create a bend in his body, and he needs to be straight to pivot properly. Correct your horse by pressing the fingertips of your right hand against his left shoulder until he moves away. A tap with the end of the lead can also be used if your horse needs a stronger cue, but again, you can’t do this during competition. Reinforce the “move away” cue until your horse learns to step into the pivot when he sees the change in your body position.

6. Backup: Stand even with or slightly in front of your horse’s nose, and turn your body so you are facing his hind end. Your shoulders will be perpendicular to his body. As with all other maneuvers in showmanship, you will stand to the left side of your horse as you cue him. As you step forward, your horse will step backward. If he doesn’t move back, apply rearward pressure on the lead as you walk.

Get it Straight
There is one showmanship move that sounds easy enough but is tough to master: walking in a straight line. Start by being in the correct position while you’re leading your horse, keeping your shoulder even with or just behind your horse’s throatlatch.

Sharpen your skills by setting up two cones 20 feet apart (buckets work, too). Start with your horse’s hind end centered in front of the first cone and walk him straight to the second cone. Pick a focal point that’s beyond and slightly to the left of the cone: Your goal is to lead your horse to the cone, not to end up there yourself. Guide your horse by holding your lead hand in front of your body. Allow your horse to “bump” himself against the lead if his head drifts off the path or he lags behind. This exercise will also help you lead your horse straight to the judge, a required skill when you’re competing. Practice jogging in straight lines as well as when you transition out of a pivot or turn.

The Quarter System
Another piece to the showmanship puzzle that you’ll need is an understanding of the quarter system. This is used when you’re presenting your horse to the judge. After you’ve approached the judge and are set up for inspection, meaning your horse is standing square, the judge will walk around your horse. Imagine four lines radiating from your horse straight out from his forehead, the left and right sides of his girth, and the center of his tail. These lines form four quadrants. As the judge passes from the rear quadrant to the front one, you will move to the opposite side. As the judge walks from the front quadrant to the rear, you will move to the same side as the judge. While the judge is at the back of your horse, you will remain on the same side. As the judge moves toward your horse’s front end, you will shift over to the other side again.

Once you have the mechanics down, all that’s left before you enter the show pen is to make sure that you and your horse look your best. Your horse needs to be clipped, bathed and groomed according to the rules and traditions of the competition. He should also be in good condition, and his hooves should look healthy and clean. It’s all about the details. Being meticulous and well-prepared is the secret to showmanship success.