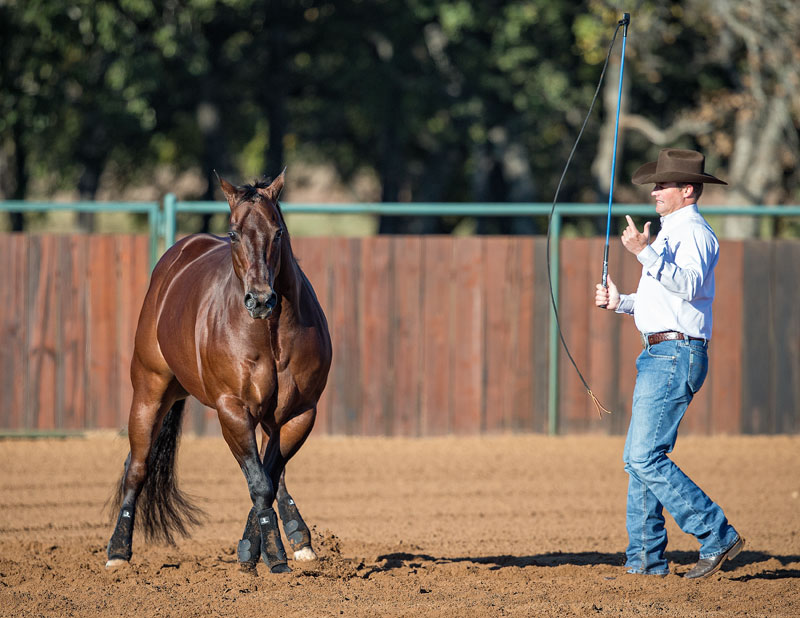 If you think training a horse is difficult, you should try keeping a trained horse happy and interested in his job. Drilling on the same exercises and routines tends to cause horses to get bored and sour. I’m always looking for ways to challenge the partnership I share with my horses and to keep training sessions fun for them.

That’s why a few years ago, I began introducing tricks to my finished horses that have been there and done that. When I begin trick training, one of the first exercises I teach a horse is to sidepass toward me. Not only is it just plain cool to be able to do, but it ensures that as the tricks get progressively more difficult I can control the horse’s movements without having to touch him.

Goal:
To teach the horse to sidepass toward you on the fence, keeping his body straight from head to tail, without having to physically touch him.

Why:
It’s all about body control. The more control you have of your horse’s feet—being able to move them forward, backward, left and right—the easier it will be to teach him what you want him to do. It will also make it easier to correct him whenever he makes a mistake or gets out of position. At different times during trick training, your horse is going to scoot his body away from you or get out of position. You need to be able to move his body back toward you without actually walking around to the other side of him.

Set Yourself up for Success
Before starting this exercise, your horse must be able to sidepass away from you well. You’re only asking for trouble by teaching the horse to push toward you if you can’t drive him away from you. Watch the video below for a tutorial.

1. Teach the exercise on the fence. The horse should be facing the fence so that his nose is actually touching it. Stand on the left side of the horse, with your belly button facing his head. You should be about a foot off the fence so that if you stuck your elbow out, it would touch the fence.

The fence limits the horse’s options so that when you apply pressure he doesn’t have the option of running forward. It’s important that you position yourself close to the fence so you don’t create a gap that the horse might be tempted to run through. Always set yourself up for success, and make it as easy as possible for the horse to understand.

2. With the reins looped over the horse’s neck, hold the left rein with your left hand. Hold your training stick in your right hand.

3. Start by isolating each end of the horse’s body. Ask him to take a step toward you with his hindquarters by reaching the stick over his spine and tapping the air on the right side of his hindquarters four times with rhythm.

Instead of asking the horse’s whole body to step toward you, break it down into steps so it’s easier for him to understand. Horses are intelligent, but they are simple creatures and learn best when information is broken down. The first goal is to teach the horse to move each end of his body toward you. Once he understands that, it will be easy to turn it into a sidepass.

If you’re not able to fully reach the training stick over the horse to tap the air next to his hindquarters because of your height, reach the stick as far across the horse’s side as you can. If you’re short and are paired with a tall horse, you may only be able to tap the air just above his hindquarters rather than right next to them. It might take a little longer for the horse to figure out what you’re asking him to do because the cue isn’t as exaggerated, but as long as you’re tapping on the opposite side of the horse’s spine, the cue will still work.

Just look for one step in the beginning. Your goal is for the horse to figure out the concept of the lesson: when you apply pressure, he needs to move away from it. As soon as he does, release the pressure and rub him on his hindquarters with the stick until he stops and relaxes.

6. As soon as the horse takes one step toward you, immediately release the pressure and rub him to a stop with the stick on his withers.

7. Just like with the hindquarters, you’re only looking for the horse to take one step toward you. As soon as the horse does take a step, be quick to reward him. Stop tapping and rub his withers with the stick.

8. Continue asking the horse to “crab” toward you, moving his back end, then his front end.

Practice moving each end of the horse until he willingly steps toward you when you apply light pressure to either end of his body.

Once the horse is confidently moving each end toward you, ask him to move his whole body toward you at the same time. To do that, reach the stick out over the horse’s spine across the middle of his back and tap the air four times. If he doesn’t step toward you, start tapping him lightly on the opposite side of his spine. Continue increasing the pressure with every set of four taps until he takes one step toward you with his whole body.

Always start by tapping the air first. If the horse doesn’t respond by taking a step toward you, then start tapping him, gradually increasing the pressure. With repetition and consistency, the horse will start responding when you lightly tap the air. Remember to reward the slightest try. Start by looking for the horse to take just one step toward you, and gradually build on it. By building the horse’s confidence, you’ll end up with a much better end result.

9. As soon as the horse takes one good step—he moves toward you while keeping his body on a straight line—stop applying pressure, relax your body language and rub him to a stop.

Keep in mind that you may initially be rewarding more of a shuffle sideways toward you rather than a perfect sidepass. Don’t be too picky about his feet crossing correctly. Remember, this is the concept lesson. All you’re looking for right now is that he understands the general concept.

10. Let the horse rest for a couple seconds while you rub him with the stick, and then ask him to take another step toward you. Continue down the fence line following the same steps.

11. Once the horse can consistently sidepass one step toward you, ask for two steps. Then ask for three steps, and so on. Every day, increase the number of steps you ask him to take.

If the horse can’t take two steps consistently, don’t ask for three. Make sure you get each step of the exercise down before moving on.

Success Tip:
The first lesson is the concept lesson.

Keep in mind that when you first start teaching an exercise, it often doesn’t resemble what you’d like it to look like in the end. Horses don’t learn perfectly, so in the beginning they make a lot of mistakes and get confused at times. Your job is to keep it as simple as possible for the horse to understand. Start by asking for just one step. Even if it’s not a very good step, reward it anyway to let the horse know that he’s on the right track. As his confidence grows, you can start asking for more steps and get pickier about the quality of the steps. It’s no different than teaching kids. You wouldn’t expect your kid to come back from the first day of kindergarten and be able to write his name perfectly. You’d be thrilled if he could just get one letter on the page. The first lesson is the concept lesson, and from then on you can work toward perfection.

Liked this article? Here are others you’ll enjoy:
Ask the Expert: Teach the Sidepass
Video: Circle Driving with Clinton Anderson 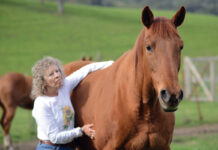 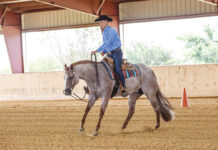 How to Prepare for Trail Classes