When Jolli Pressler rode down the centerline at the first-ever western dressage world championships in November 2012, her primary goal was to remember to breathe. Everything else would be icing on the cake.

“I’m as nervous as can be,” said Pressler in Tulsa, Okla., the day before competing with her Quarter Horse gelding, Rock Star. Her nerves were understandable. As a longtime student of dressage, Pressler knows how demanding it is—for both horse and rider—to execute a good test. But her anxiety was matched by her excitement for this growing new sport. Scores of participants from across the U.S., as well as Canada and countries as distant as Australia and South Africa, share that enthusiasm.

In July 2012, western riders gained a formal place in the U.S. dressage world when the United States Equestrian Federation (USEF) announced that it would officially recognize western dressage, and that the Western Dressage Association of America (WDAA) would serve as its governing body.


The Levels Defined
The WDAA currently offers four levels of tests, each containing four progressively more difficult mini levels. These mini levels combine western specific movements—turns on the forehand and hindquarters, quick footwork, changes of stride length, and lateral maneuvers—with routines that resemble the requirements of the United States Dressage Federation (USDF) for each respective level. In 2013, two levels of musical freestyles were also added. In the near future, tests will be judged by licensed USDF officials until the WDAA has fully installed its own licensing program for judges.

The four levels—Intro, Basic, Level 1 and Level 2—begin with tests requiring only simple walk-jog patterns and then progress to collected movements and advanced work. Each level measures the horse’s overall physical development by requiring more challenging figures and refinement.

For example, Intro level tests require horse and rider to demonstrate balance and smoothness through basic figures like shallow serpentines and large circles. Level 1 requires the horse to demonstrate impulsion and self-carriage through lengthening strides at the jog and lope in addition to turns on the haunches, smaller circles, and engagement during back-ups. By Level 2, judges expect to see the horse moving with collection, loping serpentines, maneuvering tighter figures like 10-meter circles, and executing clean 360-degree turns on the haunches.

Horse & Rider Expectations
Riders new to western dressage, especially those coming from other western disciplines like pleasure classes, are often unsure what kind of rein contact is expected. In the western dressage training scale, a horse should begin in a snaffle bit and demonstrate that he will stretch through his body and make light contact with the rider’s reins through all ridden figures before becoming progressively lighter in the reins as he advances. While the curb is optional for riders of all levels at this time, the WDAA’s rules state a strong recommendation for the use of a snaffle through Level 1.

An exaggerated drape in the reins is not rewarded for western dressage, nor is riding with a curb when a horse has compressed or shortened his neck in response to the leverage. This kind of false lightness in the horse’s body carriage is penalized, as is any work with a tight back, compressed neck frame, or signs of tension in the horse’s mouth or body.

The WDAA Intro and Basic tests require a horse to show that he can stretch his topline forward into the rider’s hands by adjusting his frame at various points in the tests. As an example, when the free jog is called for, he must show that he will stretch his neck forward and outward toward the ground while maintaining steady rhythm, and then elevate it back up without resistance.

The first part of the learning curve for western dressage competitions involves the realization that these tests are far more than just riding patterns. Developing the correct feel for impulsion and the kind of uphill engagement judges want to see in dressage movements is essential.

This feel for a horse moving correctly forward from his hindquarters with fluid strides and a supple back is best learned by riding a well-schooled horse. However, it can also be developed through specific training exercises. 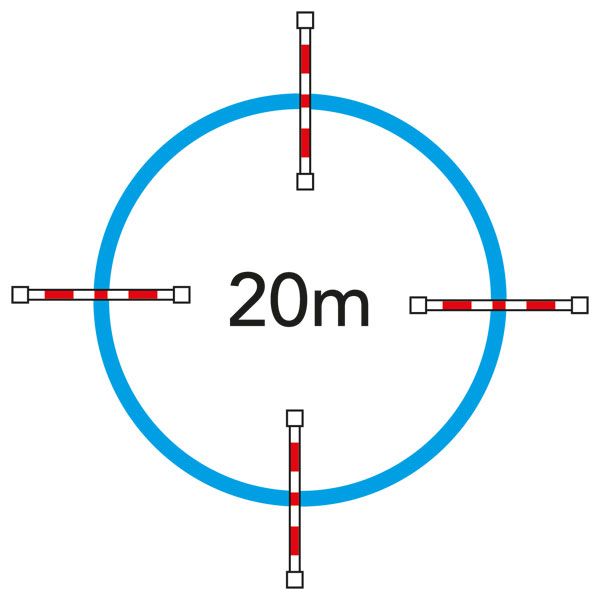 “The Clock” is a great exercise to gain a feel for your horse working over his topline. It also teaches you to control and change his stride loft and pace.

You will need four ground poles, ideally wood ones that won’t roll if they get bumped. Mark out a 20-meter circle in your riding arena.

Proceed around the circle with the new stride count, then resume your original stride count. Continue varying the strides this way.

The ability to adjust your horse’s walk in the test is a foundational skill for Intro and Basic levels. In this exercise, you’ll change your horse’s frame within the walk while maintaining his relaxation and accurate movement. This means you should be able to hold a line without drifting, as your horse moves smoothly over his back without jigging or tension and the walk remains clearly four-beated. He should stretch immediately forward with his neck when asked, demonstrating that he is working correctly with his back lifted and relaxed. In the Intro and Basic levels, he must show this at both the walk and the jog. 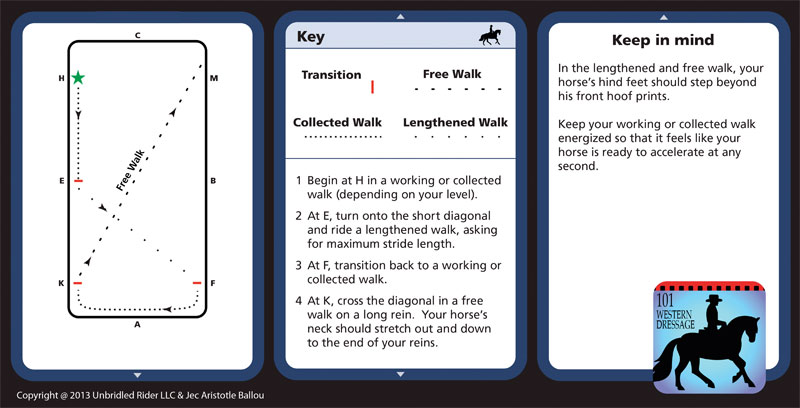 In the lengthened and free walk, your horse’s hind feet should step beyond his front hoof prints.

Keep your working or collected walk energized so that it feels like your horse is ready to accelerate at any second.

Once you get beyond the Intro and Basic levels, you’ll need to perform more difficult figures, including tighter circles and two-track movements like shoulder-in and haunches-in. Your horse will need to demonstrate that he is supple, symmetrical and highly maneuverable while remaining soft in his body during advanced movements. To train both horses and riders to accomplish this, I like to use the “snake over poles” exercise as a tune-up to bending properly. 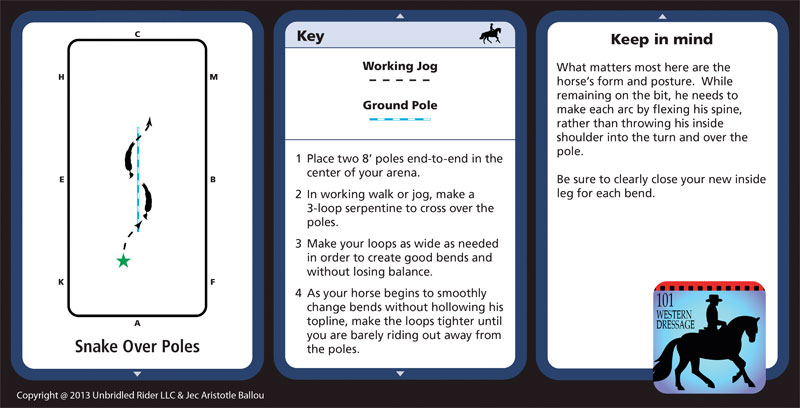 In the lengthened and free walk, your horse’s hind feet should step beyond his front hoof prints.

Keep your working or collected walk energized so that it feels like your horse is ready to accelerate at any second.

Benefits of Western Dressage
“I think the real benefit of western dressage is that you don’t have to change everything you know and start on the bottom floor,” says Jim Badger, an American Quarter Horse Association Professional Horseman who trains and teaches in Maine. “You can bring the horse and tack that you have, and the training you already have, and use western dressage to add another level or layer of expertise.” Badger has used dressage to improve his reining and cutting horses, and credits it with making them straighter and more balanced athletes.

In addition to learning through a progressive training system, western dressage competitions send riders home with individual feedback from the judge. Cathy Drumm, a trainer based in western Massachusetts, reports that her students like taking home their test sheets with the judge’s comments as much as they enjoy preparing for the show. “They are able to use this whole list of skills that they need to work on in preparation for the next show,” says Drumm.

To learn more about western dressage, visit the WDAA website for tests and rules, forums, videos and educational blogs at www.westerndressageassociation.org.

To download the 101 Western Dressage Exercises for Horse and Rider app for Apple and Android devices, go to www.unbridledrider.com.

Jec Aristotle Ballou is a national advisor to the WDAA. She has given western dressage clinics throughout the United States. Her book 101 Western Dressage Exercises for Horse and Rider is forthcoming from Storey Publishing in 2014.

Trail Riding: What’s Dressage Got to Do with It?