A smooth, seamless walk-to-lope transition isn’t just a must in the show pen. A horse that can easily strike off without throwing his head up and lunging into the gait, or breaking first into a trot, provides a more balanced, safe and enjoyable ride.

Your own position and use of the aids is what will make the difference between a collected, relaxed depart, and a rushed, anxious one, whether you’re teaching a young athlete or retraining a troublesome scamp. If you do it right, lope departs can be a sweet lesson in harmony. But do it wrong and you can throw your horse off balance, frustrate and confuse him — and end up with a horse that equates loping with anxiety.

To help you do it right, world champion Paint and Quarter Horse trainer Karen Qualls offers her technique for creating a perfect departure, and shares her tips for overcoming bad habits a horse may have developed in his takeoffs.


Before jumping in with all six feet, though, Karen advises that to do a correct lope depart, your horse should be willing to move off your leg cues with forward impulsion from his hindquarters; be comfortable with leg yields; and he should readily give to the bridle (relax his poll and soften his mouth) in response to the rein cues. If your horse hasn’t learned these basics, he’s not truly ready to perform a smooth walk-to-lope transition. This doesn’t, of course, mean that you can’t get your horse to take off but chances are, the transition will be rough and you may end up on the wrong lead.

Assuming you and your horse can calmly handle the basics, you’re ready to take off.

First, outfit your horse in a mild bit, such as a snaffle or short curb, and split reins. To start, you’ll use two hands to teach this maneuver, then gradually change to one-handed steering once he’s mastered it.

You’ll use both hands so you can capture his head and neck and you’ll push into the lope with your legs, so he won’t lunge forward. You’ll want to work in an area with good footing — it shouldn’t be too hard, too deep or too slippery — and where you’ll have room to move straight. You’ll find it easier in an oblong arena with straight sides, since horses have a tendency to drop their inside shoulder and cut in when taking off at a turn. 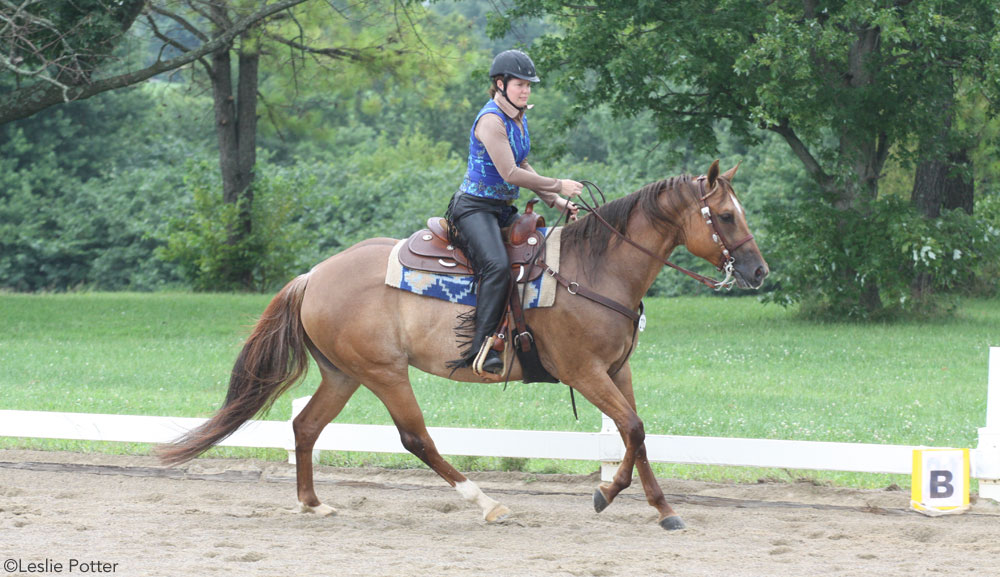 When you’re ready to begin, ask your horse for a nice, forward-moving walk You should be sitting balanced in the saddle, with hips and shoulders vertically aligned, both legs relaxed and off his sides at the cinch, chin up and hands relaxed and held just below and in front of the pommel. Look ahead and choose a point along the straight rail that you’ll aim to take off at, and a few strides before you reach it, prepare for the departure by taking up the slack in your reins.

To do this, draw your elbows back until they’re even with your hips (you don’t want to pull them any farther or you’ll lose maneuverability and therefore control). Keep your hands low to keep your horse’s head low, and tip his head to the inside slightly so you can see the corner of his eye — by applying slightly more pressure on the inside rein. This will cause him to lift his inside shoulder, making it easy for him to get on the correct lead. If you pull the rein in instead of just applying firmer pressure, he’ll either turn in a circle or lose his forward motion and become frustrated. On the other hand, if you can’t see his eye, you won’t achieve your goal.

Now that you have control of the horse’s forward motion, you’re in a position to prevent him from lunging into the gait or tossing his head at the departure.

Next, drop your weight and sit deeper in the saddle, while keeping your back straight. To do this you’ll tilt your pelvic bone back slightly so you roll a bit more on your jeans’ back pockets. This pressure will encourage your horse to use his hind end, and combined with your rein and leg aids, will help him get into a rounded, controlled frame.

Now you’re ready for the leg aids. Just before you reach your spot on the rail, find your horse’s belly with your outside leg by lightly closing your outside calf on his side, just enough to feel it. Your goal is to bring your spur in close so it’s readily accessible, but prevent you from accidentally jabbing him when you ask for the lope. (At this point, you should be able to hold a grape between your leg and saddle without crushing it.)

Your inside leg should remain relaxed at the cinch, off his side, unless he drifts sideways, which we’ll address later. At your takeoff point, slowly slide your outside leg back behind the girth a few inches: This is so your horse knows not to sidepass with his ribcage but to engage his hindquarters; it’ll push his inside hind over and encourage him to step over and forward — and therefore push off into the correct lead. Then bring your spur in arid press lightly.

Each horse is unique and will require different pressure, and by this point you should know how much pressure your horse requires. But start out light and increase as needed. If you don’t get enough impulsion and your horse breaks into a trot instead of a lope, gently bring him back down to a walk and simply ask for the lope again, increasing the pressure on your spur. Don’t jab him, which will just startle him and make him anxious, causing him to rush into the lope, and don’t reprimand him. Just try again and adjust your cues next time.

If your weight, hands and legs are in this position, your horse should slip gracefully from the walk into the lope. If so, you need to soften the aids as a reward. However, don’t throw away the reins and forget your legs or your horse may falter in his gait or fight the bit. You need to retain a certain amount of feel. Don’t look down to check for correct lead. You can glance quickly at his shoulder or check by feel. If you have difficulty with these methods, have a friend on the ground tell you and count out the strides so you watch your horse’s shoulder and learn what it looks like. Feel is something you develop, but you might notice your inside hip being thrust farther forward than your outside one.

If he hasn’t given you a good depart, read the next section, Troubleshooting Tips, and try again, focusing on your cues to avoid making an error.

If you’re consistently using all your aids correctly on a horse that has a solid foundation in the basics, it’s rare that your horse will take off on the wrong lead or give you a rough departure. If he does, you might be working with a horse that has been taught incorrectly and been rewarded for the misbehavior. In this case, you might be wise to hire a professional to correct the problem so you can worry more about your form than your horse’s. If a trainer isn’t available, you can try to work him out of it yourself by being scrupulously perfect with your cues and lavishing praise and pats when he gets itright.

You should notice that when your horse understands the cues, he’ll anticipate the departure by preparing immediately when you do (but your hold on the reins should prevent him breaking into the lope before you allow him), so you’ll want to shorten the distance between setting him up and cueing him to depart. Once he’s performing smooth departures as a matter of course with two hands on the rein, you’re ready to train him with one hand. The simplest way is to gradually bring your hands closer together as you cue for departs until your fingers are touching, and you can hold the reins in one hand.

These common problems are caused by human error. If you’re having a problem, try these fixes.