Barrel racers know that overpracticing the pattern
can sour a speed horse. But what do the pros do during the week to keep their
horses in tip-top shape, both mentally and physically, for competition season?
Champion barrel racer and trainer Sue Smith of Blackfoot, Idaho, shares her
weekly routine to help you keep your speed horse fit and focused. 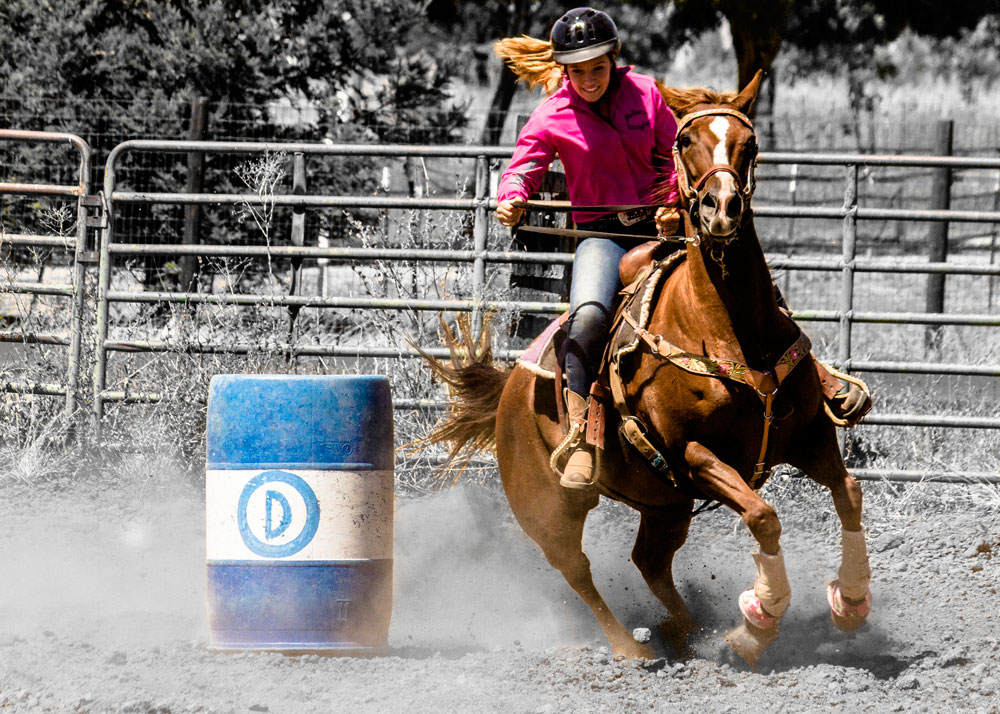 The day after a competition is all about rest for Smith’s
horses. Time on the hotwalker can keep them from getting stiff, but other than
that, they are free to relax.

“Assuming it was a
good competition run, I start back light [on the second day],” Smith says. “I
try to take some pressure off my horse at that point.”

Smith works her horses in a large field where she
can ride without the confinement of an arena. “Because the field has a big
circumference, I don’t have to do a lot of circles—I can just let my horse go
forward. I go out there and try to keep it casual and relaxed, not really
asking anything of him. Then I might trot, but I don’t do much else. I just let
my horse chill and get out of his pen.”

“On day three, I ask
my horse to give me something,” Smith continues. “I want him to break at the
poll, give me his face, step underneath himself with his hind end, and do
different suppling exercises. I’ll ask him to move his front feet in and out of
a turn while keeping his face in the correct position.”

Although Smith says many barrel racers may not
consider keeping their horse in a proper frame important, she explains that
it’s essential for good balance and correct turns. To ask her horse to give at
the poll and frame up, Smith drives him forward in to both hands and uses a
release of pressure to reward him. “I ride two-handed a lot so I can keep his
face in the right position,” Smith explains. “I drive my horse to my hands with
my legs. I’m not keeping a steady pull on his face—it’s a give and take. When
my horse gives his head to me, I release. I’m not throwing his face away, but I
release the pressure immediately so he knows where his boundaries are. He knows
that if his face is in the correct position, I’m not going to pull anymore.”

Smith practices circling as a suppling exercise and
expects her horse to stay framed up and rounded, performing perfectly round
circles. “I want my horse’s body to be in a ‘C’ shape—a curve from his nose to
his tail,” she explains. “I don’t want one part bent more than another.

“If you have the arena freshly dragged, you can
look at your horse’s tracks and make sure your circles are correct and round,
not egg-shaped,” continues Smith. She explains that a horse will often drift
toward his pen or a buddy, making the circle oblong instead of round. If this
happens, she applies more outside leg at the point where he drifts out to make
the circle true. At the opposite side of the circle, the horse may drift in, so
she’ll apply more inside leg.

Smith recommends practicing circles of varying
sizes at all gaits. “I always change up [the size] because a horse can get so
patterned that he goes through a drill without paying attention to the rider,”
she says. “That’s what barrels are all about. We teach horses to turn a barrel,
and then we have to teach them to wait for us because otherwise they’ll take
over. And then they start cutting the turns and doing it their way. I want my
horse to be hooked on me and focusing on what I’m asking.”

Smith begins circling at the slower gaits and
doesn’t increase her horse’s speed until his circles are correct. She also
notes that her weekly workout strategy differs on a seasoned competition horse
versus a young horse in training. “Most of the time, the horse I’m competing on
is far enough along that I’m not putting pressure on him with speed,” she
explains. “For most of the work I do with him, I’m trying to take the pressure
off. He gets enough pressure on the weekends.

“Speed will tighten a horse up,” Smith adds. “I
try to soften my horse in between competitions so he’s performing his best [at
the next event]. So I don’t do much speed work once he’s running well at home.”

The fourth day brings more suppling work. Which suppling
exercises Smith practices during the week depends on the horse. “I just mix it
up,” she says. “You can do a reverse arc in to or out of a turn. I’ll lope
circles, stop, and then roll my horse off of his hocks onto the opposite lead.
I do a lot of these exercises to keep my horse thinking, getting his hocks down
and then driving away.” Smith constantly assesses what her horse is doing and
what areas he may need to work on. “I feel what my horse is doing and then go
from there,” she explains.

Smith says one of the most common problems for
barrel horses is they become too heavy on their front end. She explains that
this can be caused by the rider pulling with both hands or jerking on the
reins.

“What I have to help most people with is their
horses falling on their forehand in to their turns because they’re anticipating,”
Smith says. “As barrel racers, we run the same pattern. We rate our horses, and
then we ask them to go forward. That’s the best way to [unintentionally] teach
a horse to get heavy on his forehand.

“I do a lot of suppling exercises to let my horse find
his way through the turn,” says Smith. “When I do that, I basically set him up
with his head to the inside of the turn, and I hold his head there. I’m not
just pulling on the inside rein, but I’m also supporting him with some outside
rein. I’m not going to let my horse leave that position until he steps to the
inside of the turn with his front end, stepping across. It takes a lot of
pressure off when he realizes that he can go that deep in to a turn and not get
pushed.”

Again, Smith makes sure her horse is framed up
during this suppling work. She uses her outside leg as her driving aid during
the turn, while supporting with her inside leg. As with the circles, she starts
out at a walk and adds speed once her horse gets the hang of the exercise.

Another exercise Smith uses to teach a horse not to fall on
his forehand is to offset him each time she stops. “Whenever I stop my horse, I
never just step him forward to leave the stop; I always offset him,” she
explains. “Even if I’m going to go forward, I’ll move his shoulder over one way
or another. I want him to elevate his shoulders slightly.” Smith also
accomplishes this by stopping with one rein shorter than the other, and then
backing her horse in a reverse arc prior to stepping him forward again.

“On the fifth day, I
might go out to the field and do some conditioning exercises, where I start out
trotting and then lope,” Smith says. “That helps take that real tight edge off
my horse. It gets him tired and keeps him in condition.”

Smith explains that young horses preparing for competition
will need more of this type of work, but for the seasoned competition horse,
conditioning exercises such as long trotting are more for maintenance.


If your horse is lazy or slower than you’d like, take this
conditioning time to extend the trot and make him work at the lope. “That will
help lengthen his stride,” Smith explains. “With a horse like that, I do a lot
of long trotting. Then, when I do lope him, I lope him out.”


On the other hand, a horse with a lot of go and too little
rate may need to work on control, so Smith focuses on circling and shortening
the horse’s stride.

The day before a competition is the day Smith may work on
the pattern with strategic modifications for the individual horse to prime him
for the perfect run. “Whatever he’s weak at, I exaggerate it,” she says of her
pattern practice. For example, with her current competition horse, she’ll work
on keeping his turns round. “I’ll exaggerate the roundness because he’s quick
enough that he’ll take it away from me,” she says. “I may take some extra steps
away from the barrel, keeping him extra round as he finishes it.”

Smith doesn’t often walk the pattern but will do
slower work, such as trotting up to the barrels and walking around them. “When
he feels pretty good there, then I might speed him up again until I’m loping.
If he gets a little chargey, I’ll remind him to come back to me until he’s
comfortable going a little faster,” she says.

Day seven is competition day. By staying supple and fit
during the week, Smith’s horse is ready to run!

Meet the Trainer
Sue Smith of Blackfoot,
Idaho, started out competing on the rodeo circuit as an amateur, winning
several barrel racing and all-around championships. She now specializes
in bringing along barrel prospects and has won several futurities, as
well as the Wildreness Circuit (in Idaho, Utah and Nevada) twice. In
2009, she competed in the National Finals Rodeo. For more info, visit www.spurup.com