In the Old West tradition, horses earned their keep when gathering and trailing cattle on the open range. In fact, getting a herd of cattle to market in those days took a top hand mounted on a horse with plenty of cow sense.

Hollywood has helped perpetuate a myth that horses and cows go together like peanut butter and jelly, but most horse people know better. Truth be told, most horses today have never been exposed to cattle, so they have a tendency to react toward cows more like water does to oil. 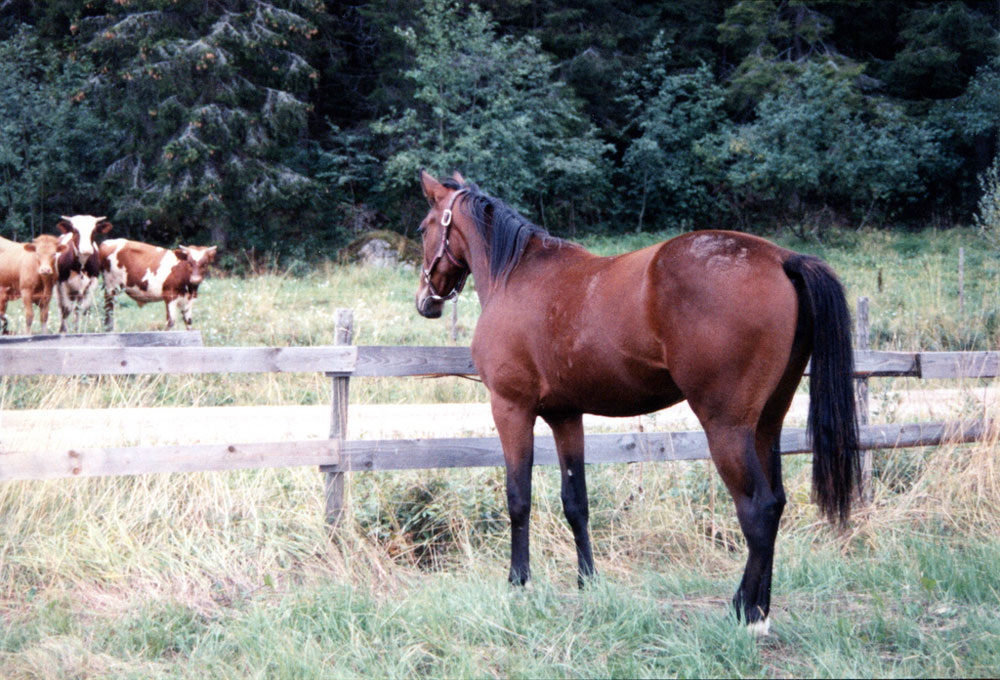 Untitled by Smerika via flickr/CC BY-SA 2.0

However, there is good news. “The way the horse reacts at first doesn’t have much to do with the way he ends up being,” says C.L. Collins, who resides on the Twenty Two Ranch in Harrison, Ark. He was raised in a ranching family in west Texas where he grew up working livestock from horseback. Over the years he’s successfully competed in various cattle events such as calf and steer roping, with cutting as his main interest, and has earned more than $50,000 in his lifetime effort in the sport. “Making a cow horse is a very long process; the horse will have plenty of time to make changes in his attitude toward cattle,” Collins says.

While all horses are not equal in natural cow sense, practically any horse, on some level, can be trained to work with cattle. “Any horse can be used to work cows, but some horses never get cow savvy,” Collins says. All in all, it’s the trainer’s job to help his animal develop into a good working horse.

Just as anything else in training, introducing your horse to cattle and developing in him the ability to work cows is a step-by-step process.

Before introducing your horse to cattle, he should have a good handle of the basics under saddle. “The horse needs to move and stop on command without hesitation and without resistance,” Collins says. “But, I think lots of horses do very well if they learn to be a broke horse while working cattle. The cow gives them a reason to stop and turn. For this reason I like to start working with a horse around cattle as soon as the horse is green broke well enough to take him to where the cattle are. A horse that is too well trained might have the tendency to wait for the rider’s cue rather than respond to the cow on his own.”

However, the average horse owner might find broader success if they start with a broke horse that has a good stop on him and responds well to both rein and leg pressure at the walk, jog and lope.

Some horses are curious and will actually want to approach cows, while others have an earnest desire to get as far away from them as possible. Since you may not know how your horse will react to cows, the best way to introduce them to him is in a safe manner, possibly where you can, to some degree, control his reaction. As an additional caution, avoid bulls. “I have worked cattle of all ages and sexes, including bulls,” Collins says. “Bulls can be unpredictable.” It is wiser for the beginner to only work with steers and gentle cows until both horse and rider have gained a fair amount of cow savvy.

One method might be to turn your horse loose in a safely constructed arena or pen with a single cow and let him become acquainted with her on his own. However, in this situation you have very little control over how your horse handles the introduction.

Riding out with a group of cow savvy horses and riders to a pasture with cattle is another way to introduce your horse to cows. Depending on how comfortable, or uncomfortable, your horse is around cattle will govern just how close you’ll be able to ride to the cows in the beginning.

Your goal when introducing your horse to cattle is to get him calm and comfortable. “A nervous horse doesn’t learn much,” Collins says. Giving your nervous horse something else to think about while riding with cattle will help. To keep up with, and eventually control, a wily ol’ cow, your horse will need to be supple both laterally and horizontally, so this is a good time to work at relaxing his poll and loosening up his shoulders. Your warm-up should also include executing smooth transitions between all three gaits as well as stops, turns and leg yields.

Warning: Be cautious when working your horse in a pasture. Grazing land, unlike an arena, may have many concealed hazards, so carefully check the terrain for rodent holes, parts of old farm equipment and old wire fences hidden in the grass before you begin working your horse.

In the beginning, your horse may be troubled with the presence of the cows and will give less of his attention to you than he does the cattle. This is fine; it gives you the opportunity to draw his attention back to what you want. Each time his attention wanders, bring it back by asking for a change in direction or speed.

“If the horse is nervous, I often turn him around, maybe once, maybe 10 times,” Collins says. “I’ll do it until the horse is relaxed and paying attention to what I’m telling him instead of what he was nervous about.”

As you continue working with your horse, slowly close the gap until you’re able to ride near the herd without him feeling troubled and losing his concentration.

An alternative approach to introducing your horse to cows is to use pens or an arena. “Because cattle tend to stop in corners, the best pens to work with cattle are round,” Collins says. “Solid pen walls are preferred over other fencing, but any fence that will contain the cattle is adequate,” Collins explains. “I have used pens as small in diameter as 80 feet and as big as 180 feet, but my favorite size, if I am alone in the pen, would be 100 feet. If another rider is in the pen with me, a good size area would be 120 to 150 feet.” Keep in mind that the smaller the pen the more pressure there will be on the cow, thus that same pressure will transmit to the horse. “For this reason, a larger pen is better for either an inexperienced horse or an inexperienced rider,” Collins explains.

Start out by placing a group of cows in a small enclosure at one end of a pen where your horse can easily see them, then ride your horse into the opposite end, and begin by warming him up, such as was suggested when working in the pasture scenario. When your horse is able to hold his concentration on you while riding along the fence where the cows are held, it’s time to go one-on-one with a cow.

At this point you’ll actually want your horse to hold his attention on the cow rather than you. You are merely along for the ride and to encourage your horse to watch and follow a cow.

If you are riding in a pasture, you may have a tougher time pursuing a single cow, since cows have a tendency to bunch together when they feel light pressure from a horse and rider. In the pen situation, you’ll find it’s easier.

Once your horse is trailing the cow well on his own, it’s time to begin taking control of the cow’s direction of travel and speed. Begin by “tracking” the cow, that is, ride parallel to the cow rather than behind her.

Walk your horse into the cow to get her moving along the fence, then rein your horse to move up parallel with the cow. If your horse tries to slow down in order to slip back behind the cow, as he did when trailing, you’ll have to cue him with your direct leg (the leg closest to the cow) in order to hold him in position, and put enough forward pressure on him to maintain speed.

Tracking can be performed at varying distances from the cow. The closer you ride to the cow the more pressure you place on her—she’ll take action by either speeding up or stopping and changing directions. In other words, the cow’s movement all depends on your horse’s relative position to her. This is where your own cow smarts come into play. (See  “Are You Cow Savvy?” on pg. 106)

A position behind the cow’s eye will initiate forward movement. On the other hand, riding toward the front of the cow’s head will challenge her and cause her to turn or stop. But how do you hold a cow?

“The surest way to hold a cow is to take the pressure off,” Collins explains. “The cow moves because the horse is closer to her than she feels comfortable with. If we want a cow to stop, we put more distance between her and the horse. How much distance depends on the individual cow and her own comfort zone. Often we can do this and still maintain a position that allows us to control the cow.”

If you’ve been riding in a pasture of cattle your horse is slightly ahead of the game, but if you’ve been using the pen system, and your horse has gained sufficient experience and confidence with a single cow, it’s time to ride him into a herd. While your horse may have been comfortable one-on-one with a cow, walking into a herd of cattle may intimidate him.

Bring a small herd of cows into the training pen and start by riding at a walk in a wide circle around them. When your horse appears relaxed with this, step him closer to the herd in increasingly smaller circles. Next, rein into and through the middle of the herd. Try to split the herd by continuing to walk straight through it. Circle the herd once more to bring the cattle back together, then rein your horse back through the center again. Continue this exercise until your horse is completely comfortable moving through the herd.

As your horse progresses, ride through the center of the herd and stop in the middle of it for a few moments before proceeding to the opposite side. Next time you might try peeling a single cow from the herd, and keeping her separated by tracking her around the pen.

Remember that introducing your horse to cattle should be a pleasant experience for him. In order to build his confidence and interest, start slow. Once your horse realizes that he can actually control a herd of cattle, he’ll become an enthusiastic partner and solid working cow horse.

Kim and Kari Baker are identical twins who raise Appaloosas on their ranch in Montana.