Why women love horses – the connection between horses and girls—and later women—existed below sociologists’ radar until recently.

Seventeen-year-old Corrie Bruning admits that she’s a horse girl. Not only because she enjoys feeding, grooming and otherwise taking care of the 12 horses at her family’s boarding barn, but also because she believes there is more to be gained from riding her Haflinger gelding, Beauregard, than just a trot around the arena.

“It’s confidence,” says Bruning. “I see the difference between me and my non-horse friends, and if I have a problem—even if I am afraid of something—I go through it and move on; they usually don’t even try anything that scares them.”

Bruning is not alone. According to Jean Halley, professor of sociology at the College of Staten Island and the Graduate Center of the City University of New York (CUNY), the connection between horses and women isn’t just something that so-called “horse husbands” commiserate about at barn parties, it’s a real thing. She should know—she wrote the book Horse Crazy: Girls and the Lives of Horses.

“I was a horse-crazy girl growing up in Wyoming and Montana,” Halley recalls. “Then I had a little girl and she reached that horse-crazy age. We were in Manhattan, and there were no horses around, so I began to wonder about it. I did some research, and I found out that nobody had studied this.”

To satisfy her own curiosity about why women love horses, Halley spoke with 25 women who identified themselves as having been horse-crazy girls, and asked them about their relationships with horses, what those relationships brought to their lives, and how they evolved into lifelong connections to horses. Those interviewed included horse owners, rescue volunteers and women who overcame physical challenges with the help of their horses.

“For example, I spoke with a woman who volunteered at a rescue, and she told me that most of the women who also volunteered were over the age of 60 and had been horse-crazy girls,” Halley says. “They handled the horses, groomed them and mucked their stalls—anything that was meaningful to the horses.”

She also spoke with women who overcame fear and significant physical challenges in order to stay connected to their horses.

“Many of the women I talked to had had broken bones—legs, arms—but girls who ride overcome fear; they might be afraid, but they ride through it,” Halley says. “It has something to do with the fact that they are in a partnership with another sentient being that happens to be 1,200 pounds.”

The desire to get back on her horse was crucial when Debbie Conklin was diagnosed with cryptococcal meningitis more than 20 years ago.

“My muscles had atrophied and I weighed 96 pounds,” she says. “My fear was that I would not be able to physically recover to ride,” she recalls.

At first, Conklin was only able to groom her Paint mare, but approximately three months later, she was back in the saddle.

“We started at a walk and built up my stamina and balance,” she recalls. “Muscle memory was there, but it was a challenge.”

These days, Conklin rides her horse Elle frequently, works with a trainer regularly, and participates in horse shows whenever she can.

“It helps my muscles and my personal attitude to keep going,” she says.

According to Halley, that kind of determination is directly connected to why women love horses. It’s the relationships women have with their horses.

At the same time, women may come by their relationships with horses naturally, according to Halley. That’s because girls are taught early on to be caretakers.

“Even if you don’t give your daughter dolls, everyone else will,” she says. With this often natural tendency toward caregiving, women are generally willing to do whatever it takes to look after their animals.

“For example, one woman reported that when she was in the hospital with an injury, her horse would not eat,” Halley says. “Finally, [her friends] put a phone up to the horse’s ear so that she could talk to him and let him know she was alright. After hearing her voice, he began to eat again.”

Finally, while the bond between women and their horses is obvious, the decision to become a so-called “horse girl” may not be a conscious one, Halley says. That’s because while not all girls become horse-crazy, horse-crazy girls often raise horse-crazy daughters.

“Living in New Jersey when I started riding, our neighbor told my mom, ‘Don’t worry, it’s just a phase, and Deb will grow out of horses,’” Conklin recalls. “During the passing years, my mom would look at me and say, ‘You never grew out of the horse thing.’ My response has always been: ‘And I never will.’’’ However, horse-crazy girls turn into horse women for life, and they have permanently changed the face of equestrian sports in general.

According to Halley, western pleasure, reining and cutting disciplines were once dominated by men. These days, as the number of women competing and winning in those events is on the rise, the number of young men participating in all equestrian sports is declining.

Halley thinks she knows why.

“Boys get teased about it, so they don’t want to be involved with a sport that is most often associated with girls.” Whatever the reason, the shift represents new ways for horsewomen to partner with their horses, whatever their age.

“It’s all about growth, acceptance, unconditional love and continuous education for my horse and for myself,” Conklin says. “I’d tell young horsewomen to keep doing what they do. If you feel that this is your love, don’t let go.”

This article about why women love horses appeared in the May 2020 issue of Horse Illustrated magazine. Click here to subscribe! 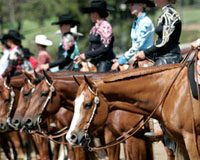