Single-digit temperatures. Water trough skating rinks. Ice crystal whiskers. When a riding day becomes a reading day this winter, brew another cup of coffee and start catching up on your reading with these horse books. 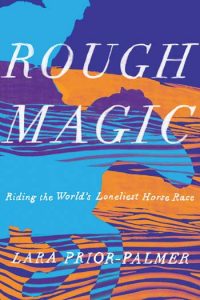 Lucy Prior-Palmer is the youngest person and the first woman to win the famed Mongol Derby, a 600-mile race through Mongolia. Now, she’s also the author of the horse book called Rough Magic: Riding the World’s Loneliest Horse Race, which is great for winter reading

Dazed and confused best describes Prior-Palmer. She flits between dead-end jobs and farfetched plans requiring money or motivation she doesn’t possess. Emerging from high school without a clue and still living with her parents, Prior-Palmer casts her fate with one computer click and enters the Mongol Derby.

She eats all the snacks she packs on the first day and finds GPS coordinates inscrutable. Instead of falling off a horse, she entangles herself in her backpack. Finishing one day of the race, let alone completing it alive, seems improbable at best.

At dawn each day, Prior-Palmer hauls herself onto another wild pony and gallops into the Mongolian desert. Native herders point her in wrong directions. Swarms of rat colonies teem under her horse’s hooves. Toilets are a misnomer. Extreme heat and biblical storms track her like bad habits.

As Prior-Palmer battles with the elements and her psyche, what began as a lark becomes a drive to win the race. Armed only with a bungee rope to tie her pony du jour and her ankle together when she misses the deadline to reach a race station, Prior-Palmer inches up on her competitors.

Readers know that Prior-Palmer wins the race from the start. The book’s engagement comes from the author’s self-deprecating humor and poetic language. An eye for her competitors’ flaws and the absurdity of her challenge to win, the least-expected, least-respected person becomes a champion. 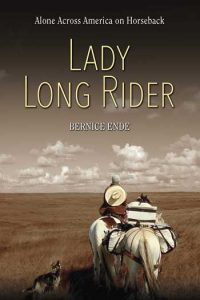 At the age of 50, Bernice Ende stepped into a saddle on a borrowed horse and rode south to visit her sister, a 2,000-mile ride from Montana to New Mexico.
Weather featured front and center on Ende’s first ride, but so did the monotony of her days.

Unpacking, grooming, feeding, and repacking left little time for Ende to put her boots up. Foraging for food and water was paramount, too.

Ende’s impulsive idea became a 15-year, 30,000-mile odyssey of self-discovery chronicled in her book, Lady Long Rider: Alone Across America on Horseback. The book, a spontaneous thought in itself, revisits each of her rides with colorful storytelling, passion, and insight for what has become a way of life, often declaring, “I finally married my life, and I love it.”

Seven rides later, Ende mostly lives outdoors full-time, alone and beholden to no one. Ende’s encounters with people opening their doors and their hearts to her open the reader’s eyes to a gentler America. 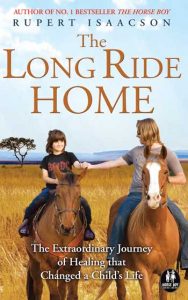 Heartbroken but undaunted, Isaacson realizes he must follow the shamans’ advice and make three more journeys. Isaacson’s second memoir, The Long Ride Home, recounts the family’s travels in Namibia, Australia, and the American desert Southwest on a quest for healing.

During the first journey, the family travels to central Namibia, meeting with spiritual healers renowned for transmitting healing properties and challenging evil spirits. Healers dance their way into trances that intensify in both time and frenzy in a spiritual war for Rowan’s health and a family’s well-being.

On the second leg of the family’s mission, the mystery deepens. An Australian healer plucks the air around his son’s head before mysteriously depositing mucus materials into a coffee cup. Is the healer extracting parts of Rowan’s brain and discarding it? Was the healer’s movement a sleight of hand or a physical decluttering of Rowan’s mind?

In New Mexico, Navajo medicine man Blue Horse waits for an image to emerge from ashes of a cedar fire before guiding a hallucinatory and life-altering sweat ceremony. After leaving Blue Horse, Isaacson is reduced to tears when Rowan begins speaking in full sentences for the first time.

An inspiration for families struggling with autism, Isaacson’s books shine a light on the healing effects of horses for all of us. 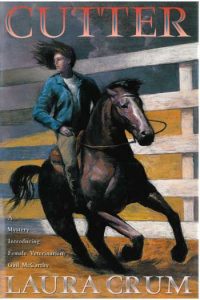 Equine vet Gail McCarthy begins her career in California’s Central Valley. McCarthy soon discovers that her hands are not only full of bandages and medications, but murder, too.

In Cutter, Laura Crum’s first book in a 12-part series, McCarthy races to the Indian Gulch Ranch after an urgent early-morning call from the resident trainer and cowboy, Casey Brooks. Ten of the ranch’s horses colicked in the night. Quick to triage the sick animals that can be saved, McCarthy grows alarmed when Casey declares that poison felled his herd.

The mysterious colic cases become much more sinister, however, when McCarthy discovers Casey’s body at the bottom of a ravine. His death sparks her anxiety, driving her to find her friend’s killer. Does the ranch owner’s secrecy about his business connect to the murder? Why did Casey’s girlfriend clam up and disappear?

Crum draws on her fascination with the cowboy life and experience with cutting, ranching, and training horses for her mysteries. In this series, relationships in and out of the cutting horse circuit weave an intricate web of deceit and murder. 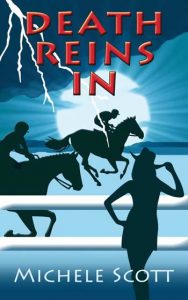 What’s the connection between a glass of merlot and a mare? How about a high-end wine collector and a Quarter Horse trainer? Accomplished mystery writer Michele Scott trades wine for horses as the backdrop for murder in her second mystery series.

With her messy divorce settled, trainer Michaela Bancroft sets her sights on expanding her business in Death Reins In. Purchasing four new horses from her dear friend and mentor Audrey Pratt, Bancroft thinks she’s on the road to financial and emotional recovery. A ghastly discovery in her barn throws a wrench in her plans. Bancroft finds Audrey dead in one of her stalls, strangled by a set of reins.

Murder may be the central crime committed, but a host of subjects like addiction, abduction, and money trick the reader with red herrings and false suspects. Clues surface in unexpected places. How does a seedy country western bar connect with a Malibu estate?

The plot, rich in secrets and deception, forces the beautiful and independent Bancroft to find the killer before the killer finds her first. If you’re a wine and horse lover, Michele Scott’s series will fit perfectly in your holiday stocking! 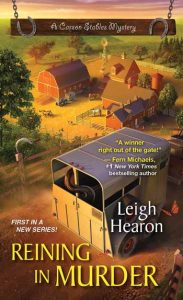 Horse trainer Anne Carson is a classic skeptic. Her relationship with others is best kept at arm’s length, and forced socializing ignites her flight impulse. Instead, Carson relies on her menagerie of horses and sheep and her blue heeler, Wolf, to corral any chaos of her own making and keep dysfunction at bay.

A loner in her private life, Carson is also the first call the local sheriff, Dan Stetson, makes when a trailer rolls over, trapping a valuable horse and the body of the driver. Stetson bristles, however, at Carson’s freelance investigative pursuits.

Toss in the unwelcome arrival of Carson’s sister, the crystal-loving, equine-empath-wannabe Lavender, and Carson struggles to reset her own
carnivorous, scotch-centered life.

Reining in Murder, the first in the four-part Carson Stable Series surges out of the gate and doesn’t come to a full stop until the last page. With a likable protagonist, author Leigh Hearon merges her lengthy career as a private investigator with her lifetime love of horses. At ease in both the equine world and the brass-knuckled environment of real-life crime, Hearon’s books leave readers engrossed and satisfied. 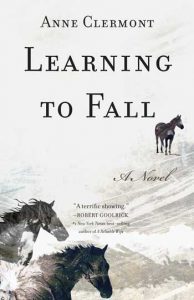 Brynn Seymour, months away from completing her dream of becoming an equine vet, can’t escape the web of her father’s hopes for her. She resists his plan for her to follow in his footsteps and be a showjumper, but complies until a tragic accident takes her father’s life.

First-time novelist Anne Clermont uses the backdrop of high-stakes jumping competition, but her debut novel is so much more. Clermont examines the tentacles of how fear holds us back, how dreams of a parent hinder our own, and how to stay true to your path.

The unrealized dreams of Brynn’s father threaten to subsume her family’s ranch and future. Debt is only one of Brynn’s problems as underhanded trainers poach her clients. A fallen star of the show-jumping world and her sometimes-boyfriend plays more than the show circuit field. Her mother undercuts her confidence.
Through every trial and tribulation, her cherished horse, Jett, doesn’t leave her side and holds the key to Brynn’s future and the ranch’s survival. Betting on a long-shot victory at the Million Dollar Cup, Brynn must surrender to the unknown of her horse’s power and her own heart.

Clermont skillfully crafts characters that are simultaneously reluctant and brave, calm and frazzled, and overwhelmed and tenacious—but they’re always authentic. Replete with obstacles, both physical and emotional, Learning to Fall captures the ambiguity of life and transports readers over fences and deep into our hearts. 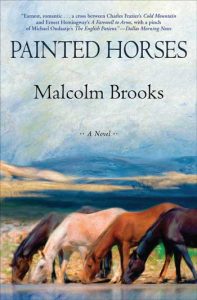 Some books, much like a forever horse, last longer than any potent childhood memory in the minds of voracious readers. Reaching the final chapter can be as joyless as it is satisfying for readers. In Malcolm Brooks’ novel Painted Horses, language is as rugged as the landscape and the characters as unpredictable as the vastness of the American West.

Archaeologist Catherine Lemay cuts her research teeth in post-Blitz London, where artifacts from Victorian and Roman eras compete for attention in the mud. After landing an excavation project in Montana, the tension between progress and historical preservation threatens to undermine all she knows and learns to value.

Lemay is a pawn. Caught between her employer, the Smithsonian, and a Montana electric utility, she’s assigned a futile task. Can she find anything of historical importance in a vast canyon that hydroelectric dam developers want to flood for their project?

Lemay is forced to place her trust in Jack Allen, an abusive Mustang wrangler and company spy to serve as her guide into the canyon. John, a reclusive cowboy with a mysterious past, intercedes in Lemay’s plans and convinces her to see more than artifacts in the canyon. 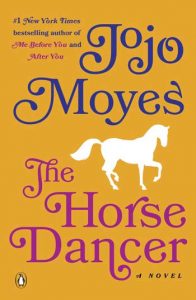 Sarah’s grandfather, Henri, once a heralded rider in an elite French riding school, lands in inner-city London after running afoul with his superiors. Henri’s career in shambles, he places his dreams for perfection in his granddaughter, Sarah. He trains her and her magnificent horse, Boo, in the gritty back alleys and city parks of London.

Natasha Macauley’s life is a mess. Her marriage is in the dust bin. Her professional judgment as a human rights attorney is under the scope of inquiry. One day, from a commuter train window, Natasha sees the willful and talented Sarah riding Boo.

Not until Sarah shoplifts a candy bar under the nose of Natasha do their two worlds collide. Natasha takes Sarah under her wing and soon finds out her charge holds many secrets. When Henri dies, the clash between classes intensifies, reaching a crescendo of questionable choices by both Sarah and Natasha.

Moyes’ modern-day Dickensian story skillfully examines the division between classes and cultures as broken characters find peace with themselves and with each other through love for a horse in The Horse Dancer.

This article on horse books to add to your winter reading list originally appeared in the December 2019 issue of Horse Illustrated magazine. Click here to subscribe!

Further Reading on Horse Books for Your Winter Reading