Excellence in equitation is valued by the AMHA and is recognized through the AMHA Medal classes, held at local and regional Morgan and all-breed shows throughout the competition year. AMHA is pleased to announce the following riders as the 2019 Gold Medal recipients in their respective seats.

Megan Gallagher of Grass Valley, Calif., was awarded the $1,500 AMHA Young Adult Alliance Judging School Scholarship for her interest in earning her Morgan R judging card and strengthening the breed with other amateurs and professionals. Read more about the scholarship.

Read More About the Morgan Horse: 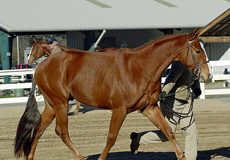 Show Solutions: How to Show Your Baby Hunter