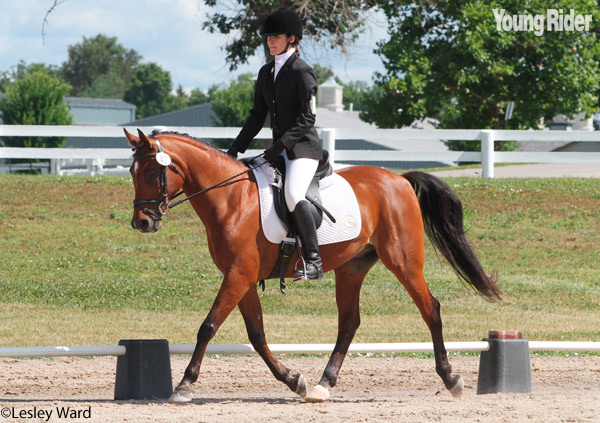 Every time you trot into the dressage arena at a show, you have the opportunity to impress the judge and win points. You also have the chance to lose points for silly things like lumpy circles or crooked lines.

Preparation is the key to winning blue ribbons in the dressage arena, so get ready for your next show by reading the following tips and putting them into practice when you’re schooling and the next time you head down center line. If you take these tips on board, your dressage scores are bound to improve!

Even though you’re allowed to have a caller (someone who reads the test to you) in lower level dressage, you should memorize the test and ride it by yourself. Lower-level tests are pretty easy. Essentially you’ll be doing a few circles in one direction and a few circles in the other direction! If you have trouble learning a test, practice it at home on foot. Every time you forget a movement (go off course) during a test you lose valuable points so make the effort to memorize it.

And finally, actually read the test! Study the objectives of each movement in the test. This will help you learn what the judge is looking for.

Practice the Test with an Audience

Practice the test at home. If you take lessons, give your instructor a copy of the test and ask her to judge your ride. If you don’t have a trainer, ask a barn friend to be the practice judge. It’s good to have someone on the ground critique your performance before you head off to a show. Don’t do the test over and over with your horse though, as he may begin to anticipate the movements and do them too early. Practice the movements individually and put them together one time during each of your schooling sessions.

Judges like to see an active pace from your horse. Slopping along slowly won’t win you any points. While you’re warming up outside the arena, ask your horse to move forward with lots of energy and power before entering the arena. Once you’re in the arena, be brave and continue asking your horse to MOVE! You may feel that you’re going too fast, but you’re probably not. The judge wants to see your horse pick up his feet and act like he’s got plenty of energy.

Straight Lines and Round Circles

It’s very easy to lose points when you enter the arena if your horse doesn’t stay straight on the centerline. Concentrate on keeping his entire body straight on the line by looking ahead at the judge’s booth, keeping your hands low and your reins even and apply even and steady pressure on your horse’s sides with both legs. Your horse also needs to be straight when he crosses the diagonals.

We’re pretty sure by now you know what shape a circle is, so why do so many people get “Circles not round” written in the judge’s comments on their test? Your circles should be round not lumpy, egg-shaped or oval. Most lower-level tests include several 20 meter circles so make sure you know exactly how big this is. A lot of people make their circles too small and lose silly points for not riding close enough to the sides of the arena.

It’s so easy to lose points during free walk if your horse simply slops along slowly on a loose rein. Work with your trainer to teach your horse the proper free walk. Your horse should march forward across the diagonal with purpose while stretching his neck and head down. Lower your hands a bit and loosen the reins slightly, but don’t loosen them completely! This really bugs some judges.

Make your transitions (for example trotting at a certain place, circling at a particular spot) as accurately as possible. If the test requires you to canter between M and C, begin preparing to ask for the canter a few strides away from M. The ideal transition takes place when the horse and rider pass the letter. The first stride of the new gait should happen as your leg is at the letter. Most judges say it’s better to be a little early with your transition than too late.

Did you know that you can lose points for not saluting? Most standard dressage tests require you to salute when you halt after entering the arena. Put both reins in your left hand, lower your straightened right arm next to your thigh and nod at the judge. Once the judge nods back at you, pick up your reins and start the test. Remember to salute after your final halt. Some riders are so thrilled to be done with the test that they start patting their horse and forget to salute. Don’t be that rider!

Get Ready for Your First Model Horse Show