Ask any horse lover about their favorite part of a parade, and they’ll tell you that it’s the equestrian troops, of course! We’ve all wondered how fun it would be to ride in a parade. Well, YR tracked down three young parade riders to find out.

Martin, Moira and Megan Taber began riding in parades through their 4-H club in Idaho. They’ve carried flags and have ridden alongside rodeo royalty and with the color guard. Aboard their Morgan horses, Martin and Megan ride in two to four parades a year, while Moira averages a couple every month. They are each responsible for getting their horses parade-ready. 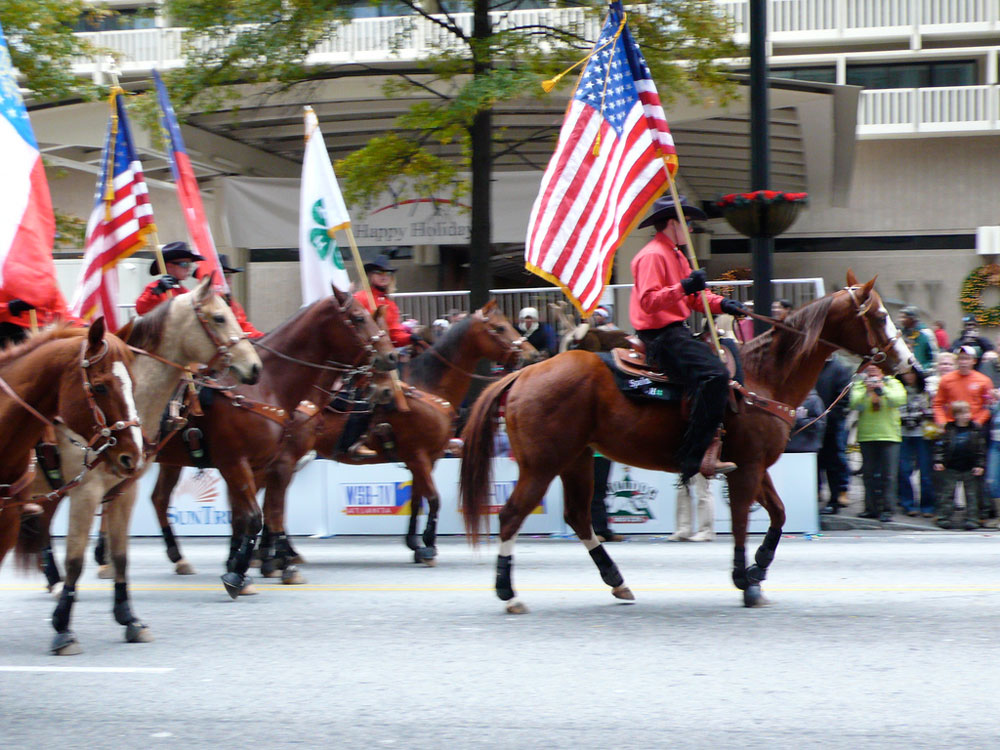 Parade prep starts well before the big day. Megan, 10, rides 19-year-old Iza Dazzle Too (“Dazzle”) on a regular basis to keep him fit. She throws in some surprises every now and then to make sure he can take whatever happens during a parade. “I ride often so my horse and I will have confidence in each other,” Megan explains. “I try lots of new things so that if we come across something ‘scary,’ we can get through it together.”

Martin, 16, does a lot of trail riding and some arena work to keep his horses fit. Lessons just before a parade help him and his horse get a tune-up on their skills.

Moira, 14, makes sure her horses are ready for anything by practicing for the unexpected at home. “I expose them to an imitation of anything they might see on the parade route, from plastic bags and little flags to balloons and light-up toys,” she says. “At home, we teach our horses to ride in parades by riding over tarps and around loud noises. While we show them all these ‘scary’ things, we do our best to remain calm and patient. One of the best ways to truly train a horse for a parade, though, is simply to ride him in a few parades surrounded by other horses he knows and trusts.”

Moira also rides dressage to keep her horse fit and responsive to her cues. She sometimes takes lessons in reining and equitation, too.

Mom Amie, who has ridden in parades since she was 13, says that the most important step to getting your horse ready for a parade is to ride as much as you can outside of the arena. “If you aren’t comfortable with your horse at home in the yard or out in a field, you won’t be happy and confident in a parade,” she says. “Ride, ride, ride!

“To build confidence when the kids were younger, we did stuff like playing tag on horseback, cowboy polo with an exercise ball and brooms, and whatever other stuff I could come up with to get the kids and horses used to playing together.”

Another way the Tabers boost confidence in themselves and their horses is to play follow the leader. When Megan first started carrying sponsor flags at rodeos at the age of 8, she rode behind Moira in case her horse got nervous. “We handle parades the same way,” says Amie. “The first parade is always in a group with an adult chaperone and at least a couple of parade-broke horses.”

Moira says that it’s important to keep your nerves in check, too. “Your horse needs every reassurance that he can trust you,” she says. “Learn techniques to keep you and your horse calm, and go out in an experienced group the first time so that it’s a good memory.”

Above all else, the Tabers have always ridden horses that fit their individual skill levels.

Megan loves everything about riding in parades. “I like the work, the attention, the craziness—all of it!” she says. And it can definitely get a little crazy around the barn when it’s time for a parade.

“Getting my horse ready starts the night before the parade, when I clip, bathe and blanket my horse,” explains Megan. “While he’s drying, I get my tack loaded. I usually go to bed before 9 p.m. so that I have plenty of sleep. The day of the parade, I get up really early in the morning and double-check everything. That means I check my brushes, tack and my horse, too.

“When I get to the parade, I get to fancy my horse and myself up!” Megan adds. “Depending on the parade and what I’m doing, I will dress up my horse with sparkles, flowers, paint and fancy leg wraps.” If there’s no special theme, the Tabers ride in western attire, says Martin.

After all the hard work is done, the best part of riding in a parade is showing off the horses, says Martin. But that doesn’t mean you can just sit back and relax in the saddle while your horse does the work. You have to be calm but alert. Pay attention to everything going on around you and to your horse’s mood and reactions.

At the same time, don’t forget to have fun! “The whole point of a parade is to celebrate something, so be happy and keep your spirits up,” says Moira.