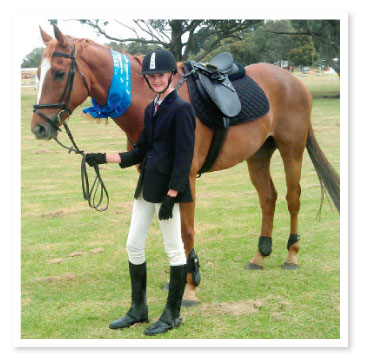 Kellie White, 14, is a lot like any other Young Rider reader: she lives on a farm with her family and four horses, learned how to ride on a stubborn pony, has since moved up to her Thoroughbred, Theo, and show jumps.

But Kellie’s farm is located in the small town of Manjimup, which is in southwestern Australia. While most Young Rider readers have their mags delivered right to their door, Kellie gets her copy from a local newsagent and reads every issue religiously.

Kellie’s first horse was a Welsh Pony named Sweetie. When Kellie first got Sweetie, the mare was only 2, so she couldn’t be ridden yet. After practicing and watching other riders, Kellie entered Sweetie in a local agricultural show, which is like a county fair, and they won runner-up.

Like most young riders, Kellie eventually outgrew Sweetie and started looking for a new horse while Sweetie started her new life as a Pony Club mount.


Next came Strawberry, the 13.2-hand pony that Kellie’s sister, Nicole, had just outgrown. “Although she was trained, she didn’t resist the temptation of throwing you off at every show,” remembers Kellie. “I think I practically broke a world record for ‘most shows you’ve fallen off at’!”

Kellie and Strawberry began adding new, scary elements to their jumps at home, which built up their confidence.

“When I turned 13, my body decided to stretch about 20 centimeters (8 inches), so we had to sell Strawberry,” Kellie says. Going from 13.2-hand Strawberry to 16-hand Theo was a challenge for Kellie at first, but now she says everything has fallen into place.

“Theo and I love going on relaxing trail rides and galloping through the gum tree plantations,” says Kellie. She also adds that she and Theo travel all around southwestern Australia to compete in show jumping competitions.

The equestrian lingo in Australia can be a bit interesting. According to Kellie, Australian riders “agist” their horses at “studs” instead of boarding their horses at farms. They also blanket their horses with “rugs” when it gets chilly. Australian horses are transported in “horse floats,” which Kellie told us comes from the word “float,” a low-bodied cart for carrying heavy loads or livestock.

So, what does Kellie think is the biggest difference between Australian young riders and American young riders? The weather. Since Australia is located in the Southern Hemisphere, their seasons are opposite of ours. While many American riders are bundling up to battle the cold, Kellie and her fellow Aussies are heading outside for some show jumping in the sun.