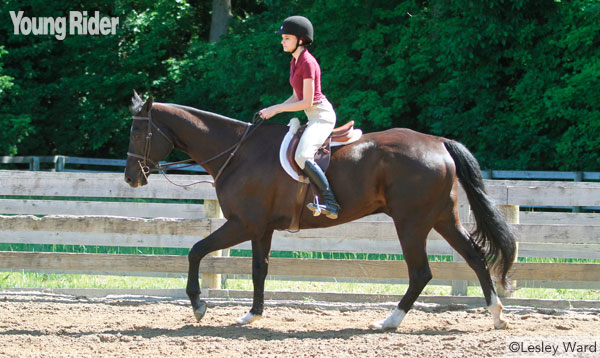 Riding a horse with a lovely, balanced canter feels great. If everything’s going well, the rocking horse motion of this 3-beat gait should feel smooth, and your body should follow along in sync with the horse’s movement as he canters calmly around the arena. But as we all know, cantering is not always balanced and comfortable. When a horse picks up the wrong lead it feels weird and bumpy, and it’s no fun when he trots faster and faster to avoid cantering. Whoa!

If you’re having cantering problems, take a look in the mirror. Say what? Most cantering conundrums are caused by the person in the saddle. Yes, you! If you bounce around on your horse’s back or don’t give him the correct cues you’ll probably have problems.

Cantering Cues
If you’ve ridden lots of different horses, you may have discovered that a cantering cue that works on one horse might not work on another. It all depends on who taught them how to canter as a greenie and what signals that person used on him. If you have problems getting a horse to canter right away, you might have to try some different cues to get him to respond.

The most common way to ask a horse to canter is to ask him for an active trot and when you reach a corner of the arena give the following cues:

In a perfect world, your horse will leap instantly into a balanced canter and he’ll be on the correct lead.

OK, so we know this doesn’t always happen. Let’s look at some things that can go wrong.

Some horses just trot faster and faster to avoid cantering. When you finally get them to canter, they rush into it and feel unbalanced and out of control. How do you fix this?

Get his attention right away by sitting up tall and pull back on one rein and then release it when he slows down.

The second he trots nicely, ask for canter again in a firm, strong way.

If he doesn’t respond to your leg cue, tap him with a crop behind your outside leg. This might surprise him, but he must react the second your leg bumps him.

Wrong Lead
All horses pick up the wrong lead sometimes, but if your horse does it a lot try these two exercises:

Bucking Bronco
Many horses think breaking into the canter is the perfect time to throw in a buck or two. Don’t let your horse get into this habit. Maintain a firm hold on both reins and lift up your inside hand slightly to keep your horse’s head up when you give him the cues to canter. If he starts putting down his head, sit up straight, push down your heels and quickly raise your outside hand and rein to pull up his head. Don’t let him pull you forward because once he’s got you perched up on his neck, it’s pretty easy for him to start bronking and it won’t be long before you’re flying through the air!

The Welsh Pony and Cob