If your horse was suffering from colic, would you be able to tell right away that something was wrong with him? You need to know the signs of colic so you can call the veterinarian immediately.

Colic is a serious equine stomach ache, and if the symptoms are overlooked it can kill a horse. Horses suffer from colic because they can’t vomit and rid themselves of harmful stomach contents, or burp to relieve pressure from gas. They also have extremely long digestive tracts that can suffer from impactions (blockages) and twisting.

Sometimes colic can be mild and the horse will require little care, but other times it can be severe and may result in expensive surgery, costing $6,000 to $10,000, which can be risky for the horse.

Lots of things can cause colic, from poor feeding practices to parasitic infestation. Occasionally, the cause of the colic will remain a mystery, and you may never find out why it happened. Some horses are simply more prone to colic than others.

Here are some common causes of colic:

If you spend lots of time with your horse, you should know what he acts like when he’s healthy. If he starts to act strangely, he could be sick.

Here are some signs of colic:

If your horse displays any of these symptoms, call the vet right away. If she can’t come out to your barn immediately, request another vet. If your horse is very ill, the vet may tell you to trailer him to the nearest equine hospital.

What to Do Until the Vet Arrives

In the past, owners were told to walk their colicky horse until the vet arrived. This prevented the horse from lying down and rolling, which can cause a twisted intestine. Today, most vets say to leave the horse in his stall or field and watch him closely. Walking a horse for hours just makes him tired.

If he tries to roll, walk him for a while to keep him on his feet. It’s OK to offer your horse water while you wait for the vet.

Gastric: This is caused by a build-up of gas in the digestive tract.

Spasmodic: The horse suffers from spasms or cramps of the intestines.

Worm damage: Worm larvae invade the blood vessels that supply blood to the intestines. Large clots form and cut off the blood supply to parts of the intestines, causing damage.

Sand: This is caused by grazing on pastures with sandy soil. When the horse nibbles on grass or hay, he ingests sand and tiny gravel too. The sand accumulates in the digestive tract and prevents food from passing through normally.

Twisted intestine: This is caused by a horse rolling violently because he’s in pain from another digestive problem; for example, gas caused by indigestion.

The intestine swings from side to side and flips over on itself, causing a twist that results in a blockage, which stops the blood supply to that part of the gut.

If no blood reaches the area, that part of the gut will die and the horse will go into shock and could die.

What the Vet Does

When the vet arrives, she’ll take your horse’s temperature and pulse, and then she’ll listen to his gut sounds. His stomach rumblings, or lack of them, can tell her a lot about his condition. 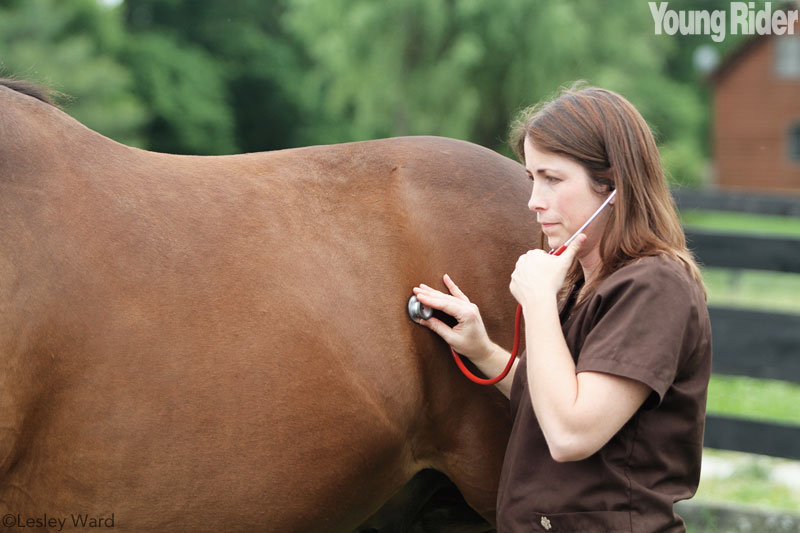 She may give him some medicine, like Banamine, to relax his digestive system and ease the pain. If your horse produces manure soon after, this is a good sign, and he may be on the mend.

If the vet thinks your horse has a blockage, she may tranquilize him so he won’t move around and run a rubber tube up his nose and down to his stomach. Then she’ll pump mineral oil into his stomach to help push the obstacle through his gut.

If this treatment is successful, you’ll be left with some runny manure piles in the stall and a horse that feels a lot better.

Most horses recover quickly from a bout of minor colic and you should be able to ride them in a day or two if your vet says its OK.

If your horse needs surgery to remove a blockage or repair a twisted gut, the sooner he gets on the operating table, the better of a chance he has for survival.

The surgeons will open up your horse’s abdomen and study the intestines to find the blockage or damage. If they find a blockage, they’ll remove it. If they spot a damaged part of the intestine, they may remove it and then sew the intestine back together.

After surgery, your horse will stay at the clinic for a few days and wear a stretchy, wide bandage around his stomach to support his internal organs and protect the wound. When he returns home, he must be kept in a stall or pen for at least four weeks to give his wound time to heal. His stitches will be removed about 10 to 14 days after the surgery. Once the wound is healed, he can be turned out into a small field.

Your vet will tell you when you can ride your horse again, but it probably won’t be until two to three months after the surgery.