If you have a pony or take care of one, you’ll know that the farrier is one of the most important persons in his life. Sure, you feed him and the vet gives him shots to keep him healthy, but if your pony’s feet are in bad condition, you won’t be able to ride him — and that’s no fun. Like the old saying goes, “No hoof, no horse!”

The farrier is the person who trims your pony’s hooves, and puts shoes on him if needed. A pony’s hooves are like human nails. They grow about a quarter of an inch a month, so they need to be trimmed and filed (rasped) into shape regularly.

If your pony’s hooves get too long, they could crack and make it difficult for him to move properly. His shoes could get loose and fall off. He could also become sore and lame.

So now you see how important the farrier is to your pony. That’s why we decided to talk to a farrier and find out how you can help him do his job.

Farrier Fact File
Eric Johnson works in Lexington, Kentucky, one of the horsiest places on earth. He’s been shoeing for more than 12 years, and he works on all sorts of horses, including eventers, dressage stars, trail horses and Pony Club ponies. Eric likes being a farrier because he can be his own boss and he can set his own hours. “I like horses a lot, too, and that’s a big plus to the job,” explains Eric. Eric admits that being a farrier is a tough job sometimes.

We asked Eric what young riders like you can do to make their pony’s shoeing go smoothly, and here’s what he said.

Farrier Tips
1. Be on time for the farrier. If the farrier is coming at 8.30 a.m., be in the barn with your pony. Don’t run up and say, “I’ve got to get my pony out of the field.” Farriers are busy people and have other horses to shoe.

2. Your pony should be clean and dry. If the pony is soaking wet, the farrier will get wet, too.

3. Pick your horse’s feet out before the farrier comes.

4. Be present when your pony is being trimmed or shod. The farrier may need to ask you questions about your pony, or he may ask you to hold your pony.

5. Have a clean, level surface for your farrier to work on. It helps if the area is well lighted, too, so the farrier can see what he’s doing.

6. The shoeing area should be peaceful so your pony is relaxed for the farrier. Eric says, “A jumpy, nervous horse is difficult to shoe. He’ll start associating the bad experience with the farrier.”

7. Your pony should be well-behaved. Eric says that the farrier shouldn’t have to train your pony. Practice picking out your pony’s feet before the farrier comes.

8. If you have a dog, keep an eye on him. Dogs love to chew on hoof that has been trimmed off, and they may get in the way of the farrier.

9. Your pony should be trimmed regularly. Eric recommends every six weeks, but it may be longer or shorter depending on the time of year. Don’t wait until your pony’s hooves are a mess and then call the farrier.

10. Have some fly spray handy, especially in the summer. It’s hard to shoe a horse when he’s twitching flies away.

11. If you have a shoeing emergency — for example, a shoe falls off the day before a show — be polite and friendly when you call your farrier to ask (beg!) him to come out. “Most farriers will be happy to help you out in an emergency,” says Eric.

12. Farriers like to be paid when their shoeing job is finished so make sure Mom or Dad has a check or money ready.

English Lesson: How to Get Started in Dressage 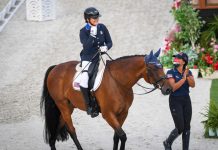 Help! My Horse Lies Down in Water