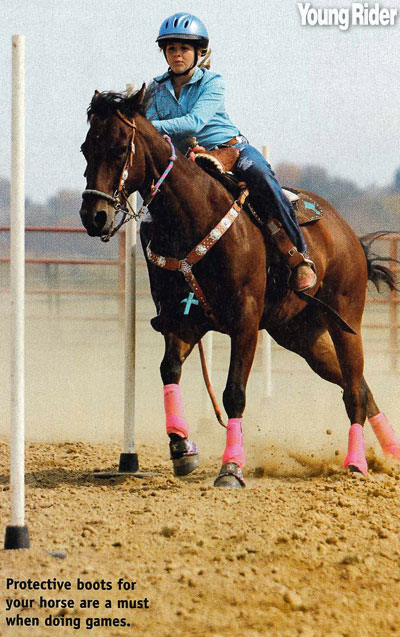 If you feel the need for speed and your horse is quite zippy when he wants to be, then you might have a lot of fun competing in mounted games, sometimes called “contesting.” Mounted games include events like poles, barrels, keyhole, flags and ride a buck.

Mounted games usually take place at local rodeos or shows. You just show up on the day and pay to enter the games you want to do. Mounted games are casual—no show clothes required, but wearing a safety helmet is always a smart idea. Games are usually held at the end of a show, so you can let loose and really have fun.

Any time you plan to gallop your horse, put splint boots on all four of his legs. When your horse travels at top speed, he may kick himself or knock his lower legs with a hoof. Boots will also help to give his legs some support because galloping and turning fast can strain his delicate leg muscles and tendons. You can go a bit wild when choosing the color of the boots—fun colors like pink, purple or aqua are perfectly acceptable when you’re competing in games events.

You should also slip a pair of overreach boots on his front hooves to prevent his back shoes or back hooves cutting his pastern area when he gallops.

If you have a hard time turning, slowing down or stopping your horse when you go fast, you might consider using a stronger bit on him so you don’t have to yank on his mouth roughly. Talk to a trainer or an experienced horse person to see what bit she recommends. Use a simple snaffle bit when your horse isn’t competing if he goes nicely in it.

If you’ve got the cash, invest in a pair of knotted rope barrel reins. These reins have four or more knots in them to prevent the reins from slipping through your fingers. Barrel reins also come in lots of fun colors.

Before you head to the show ground, there are a few things you need to work on at home.
Is your horse fit enough to games? It’s not fair to drag your horse out of the field when he hasn’t been ridden in weeks and expect him to gallop around barrels. In fact, you could injure your horse by galloping him when he’s out of shape. You need to ride your horse regularly and do fitness work out on the trail or in a big field if possible before competing. Do lots and lots of jogging to improve your horse’s stamina.

Can you gallop your horse safely? Some horses get really excited when you ask them to go fast. If your horse bucks and props when you ask for top gear, you’re not going to do well at all at a show.

Practice galloping in the arena at home. Ask for the lope, then lean forward to get your weight off your horse’s back, push your reins forward and squeeze with your legs to ask for a faster pace. Do you feel safe galloping at top speed? If not, practice loping and ask for a bit more speed when you feel comfortable. If your horse is a slow-poke, carry a crop and give him a tap behind your leg to make him move forward.

Do lots of bending work in the arena. Circle, circle, circle! Do serpentines and figure eights. Your horse needs to be flexible if he’s going to bend around barrels or in and out of poles.

Practice slowing down from a lope or gallop. Do lots of transitions so your horse listens to you and understands when you want to slow down and when you want to speed up. If you can’t slow down your horse, you’re not going to be able to grab a flag from a container or go round a barrel accurately.

It’s a good idea to practice mounted games. Why? You want your horse to learn the games and know what’s expected of him when you do them at a show. Ask a few barn friends to practice the games with you.

Take a look at some of the games you may see on a show program. Learn how they’re played, practice them at home and make room for the ribbons and trophies you’re going to win!

In the flag race, you gallop around a barrel and grab a flag out of a bucket that is on top of the barrel. In a simple flag race there is only one barrel. You cross the start line, run around the barrel, grab the flag from the can and gallop back to the finish line. You’ll be given time penalties if you or your horse tips over the can, knocks over the barrel or drops the flag, so be careful. The fastest rider wins.

In another version of the flag race, there are three barrels set in a triangular pattern (like a barrel race.) You grab a flag from the first barrel, run around the second barrel and drop the barrel into a bucket on top of the third barrel. Then you gallop across the finish line.
In a third version, there are two barrels set beside each other about 25-40 feet apart. One barrel has a flag on it. Gallop to the first barrel, grab the flag, gallop to the second barrel and drop the flag in the bucket. Then gallop to the finish line. You run in a U-shaped pattern in this race.

There are several variations on the ribbon race, but all involve a pair of riders holding a paper “ribbon” that is about two feet long between them.

The most common ribbon race is timed and the two riders compete by themselves in the arena. The riders hold the ribbon between them, one hand on the reins and one hand on the ribbon, and gallop together around the arena, usually riding around one or two barrels. The fastest pair to cross the finish line without ripping the ribbon wins the contest.

Another type of ribbon race is when several pairs enter the arena, all holding the ribbon between them. The judge asks the competitors to walk, jog and lope with the ribbon and the last pair to survive with the ribbon intact wins.

Practice riding next to a pal so your horse gets used to having another horse close to him. Then he won’t freak out when you do the ribbon race.

A large keyhole shape is marked in the arena dirt with lime (see diagram). The round part of the keyhole is four feet wide. The start and finish line to this race is at the end of the ring opposite the keyhole. You run your horse across the start line down the lane, turn around in the circle and run back. If your horse steps outside the keyhole, you’ll be disqualified. The fastest run wins.

Practice at home with a larger keyhole and gradually reduce the circle as your horse becomes more experienced in doing the 180 degree turn.

Riders enter the arena with one hand on the reins and the other hand holding a spoon with a hard boiled egg resting in it. The judge will give commands like halt, walk, jog and canter. Your job is to keep your upper body and hand steady so the egg doesn’t topple off the spoon. If you drop the egg you must walk to the middle of the ring and stand there until the class has been won. The last rider to still have an egg in her spoon wins. 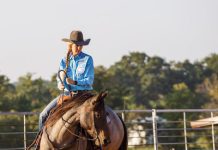 Find Your Pocket in Barrel Racing